We pick the race up in the 2nd beat, it is extremely close racing, all boats within 12 boatlength’s.

Some ducking and tight crossing coming up at the weather mark. You can feel the tension rising. Somehow it all fits.

Right looks best in first part of the run. Quantum is left, Bribon goes from right to left first.

Half way down the run the boats come together and indeed the right paid, Matador takes over the lead. Quantum 2nd, Bribon 3rd.

AudiAOne made good gain as well to the right, now in 5th.

All finish within 56 SECONDS, amazing race.

Synergy keep themselves firmly in contention at the Region of Sardinia Trophy with a win. Their second win of the 2010 season, after winning the second race of the Portugal Trophy in Cascais, came when they were first to tack off to the right off the start line.

The Russian team with Karol Jablonski (POL) steering and Rod Dawson calling tactics pitched early for the long term gain to the right of the first beat. They lead around the windward mark from TeamOrigin (GBR) and Emirates Team New Zealand (NZL) with Quantum Racing (USA) in third.

The downwind legs again proved decisive, with the progressive wind bend out to the right side of the downwind leg usually offering a benefit.

While Synergy (RUS) went on to win, extending on Emirates Team New Zealand on the final run, Matador (ARG) staged a great recovery to finish fifth. They took a penalty turn after appearing to foul Quantum Racing on the first upwind leg. Though they dropped to tenth at the first leeward mark they fought back to save a fifth. They lead the regatta by one points over Synergy and two over Audi A1 powered by ALL4ONE (FRA/GER).

Will be remembered, certainly by the onboard guest, for the AudiAOne crashing into Bribon. What seemed like a simple duck in 10 knots of breeze turned into a nightmare for Jochen Schumann when all of the sudden it looked like he lost control. Maybe his tiller extension slipped? We will find out soon.

The incident and timing (final event MedCup) reminded much of a similar crash between Stay Calm and Bribon, back in 2007.

The race continued for the others and delivered another convincing win for Matador, who now has a good lead in the event over Synergy, 5 points. 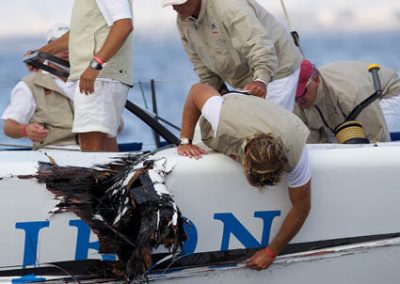 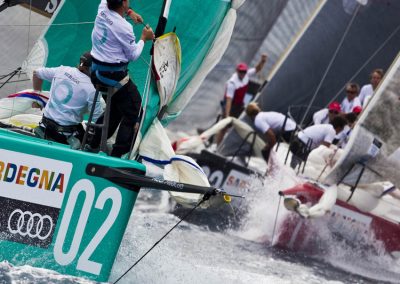