A few years after the ULDB 70 Sled heydays of the 1980’s and 1990’s, the Transpacific YC commissioned a new class of fast offshore race boats to provide similar speeds but in smaller more modern shapes to do its signature Transpac race to Hawaii, but to also be fit for other races around the world.

The TransPac 52 was born, and ever since the this box-rule design has evolved from being designed for coastal and offshore races in California to being used as the world’s premier inshore racing class at venues in the Mediterranean and beyond. A total of sixty-six TP52’s have been built around the world over the past 12 years to plans made by the world’s best designers, making this one of the most successful design concepts in the history of offshore sailing.

Division 2 in this year’s fleet represents a unique section across a few generations of TP52 design. The latest and greatest of these started to arrive at the finish of Diamond Head today, led by Isao Mita’s Judel/Vrolijk-designed Beecom, who competed in the 52 Class SuperSeries only last year as Audi All4One.

In fact, the mixed Kiwi/Japanese team on Beecom had only a few weeks to take possession of the boat, paint her blue from red, refit the boat for sailing, sail the qualifying passage in rough weather off the Farallon Islands west of the Golden Gate, and then head south to prepare for the race.

When asked how the boat held up in the race, crew member Dave “Munders” Munday summed it up in one word: “Wet. This is a MedCup boat that has a low freeboard and a lot of holes in the deck for control lines, when we were going fast the water would shoot in everywhere.”

And this is how Beecom and their seven other rival 52 teams in Division 2 sailed this race – wet and fast – as they dove south early on to stay in steady pressure at the expense of extra miles sailed on the course. Beecom led most of the way, and finished 1.5 hours ahead of a 2008-generation 52, Thomas Akins’ Reichel/Pugh-designed Meanie.

In the ORR scoring used for this race, Meanie defeated Beecom in corrected time by an amazingly close 4.5 minutes. But using the High Performance Rule (HPR), making its debut here in this year’s Transpac, Beecom defeats Meanie by over 22 minutes.

Next across the finish in this division was another Reichel/Pugh design, a more modern boat from 2010 called Vincitore, owned by Ricardo Brockmann. And after that an even more modern design, Jens Kellinghusen’s Ker 51 Varuna from Germany, configured more for all-around rather than just downwind performance.

The remainder of the class is due in tonight, while the first of the ULDB Sleds makes their way in a few hours before dawn. 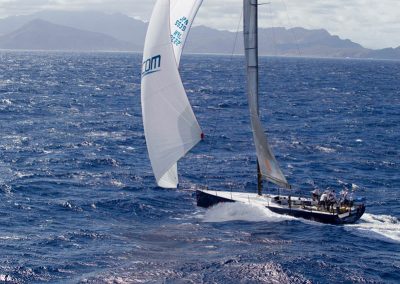 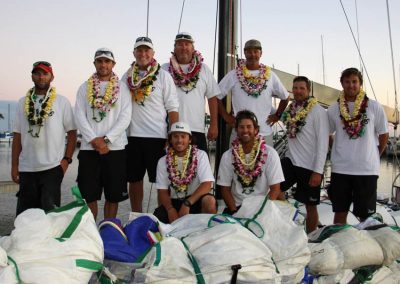