In Xaloc thermal winds of 12-17kts and magnificent sunshine the regatta leaders were not quite able to dominate like they had on previous days. First Rán Racing had pricked the regatta leaders form when they lead until the top of the second beat on the first race before being broken down by Quantum Racing. Then the next contest Azzurra finally broke the chain of wins of Rán Racing and Quantum Racing when they triumphed in the day’s second race by a comfortable margin.

But Quantum Racing’s fifth win in a row came when they were able to grind leaders Rán Racing down in a short tacking duel towards the top of the second beat on the first race of the day. Up against a Quantum Racing crew of which the majority are America’s Cup winners Niklas Zennström’s crew made a small error as they completed a tack –and had to take a penalty turn which dropped them from first to third.

Rán Racing rallied to finish with in a dead heat with Interlodge for second and third, while Quantum Racing had extended away slightly for their fifth winning gun.

Rán Racing did then extract a measure of revenge at the start of the second race, seizing the opportunity to push the regatta leaders to the right just before the start. This opened the door for Azzurra to execute a perfect start mid-line, lead out to the favoured left and build a very healthy cushion, the 2012 52 SUPER SERIES champions winning their first race this week.

Whilst the blue hulled 52 racing for the Yacht Club Costa Smeralda was able to sail their own race, Rán Racing had to work through the fleet to finish with a third whilst gaining two places on the final ran minimised early race losses sustained by Quantum Racing as they finished with just fourth placed Gladiator between them and their main Copa del Rey title rivals.

With two races scheduled on the final day in what should be more of the same, sea breeze conditions, Quantum Racing have a margin of 5.5 points over Rán Racing.

“ There is a lot to do but the second race just shows anyone can have a weaker race.” Jules Salter, the Rán Racing navigator asserts.
Rán Racing may have been the top scoring boat of the day, but with a fourth and a second, Manouch Moshayedi’s team on Rio are more settled in fourth, six points behind Azzurra and 6.5pts ahead of Provezza.

Jordi Calafat (ESP) strategist Quantum Racing (USA): “We wanted to start on the left side of the line but could but could not get there and so we tried to get some separation. There was no big fight with Rán Racing. We had a nice comeback on the last run and gained two points back and that was important. We had a little bit of a tacking duel with them in the race before. We took the right mark at the gate, splitting marks, they let us take the left mark and that allowed us to be bow forwards going to the left of the bay. We almost had them but we ended up to leeward of them on port and Terry did a great job, putting one more tack on them and managed to bounce them again. They made a mistake and they took a penalty. There we did a very good job, boat handling, everything. I think it is good to have that lead into the last day. We always said we wanted to be in contention and have two good final days and so having these five and a half points lead into the last day has to be good.”

Manouch Moshayedi (USA) owner-driver Rio (USA): “We had a great day. We went the right way. The boat was fast and we took the right shifts. We could not have asked for a better day. It feels fantastic when you consider the advances we have made since Key West when we were always in the last couple of boats and now we are in the top half for the fleet. It is great.”

Bruno Zirilli (ITA), navigator, Azzurra (ITA): “ We had a good start. It is a bit one sided and so you have to be there first and we managed that. We gained on the downwind too with good boatspeed. On previous races we have been a bit stuck with other boats. There is a lot of moding with different boats, trying to go fast or go high. So sometimes you lose out to other boats.”

Jules Salter (GBR) navigator Rán Racing (SWE): “We got an opportunity to force Quantum Racing right and did ok from that. It did not really work out that well, but we have to engage them if we want to beat them and we tried. We got into the race well. We were going well downwind and picked some good lanes downwind, especially at the bottom mark we got back into the fleet. There is a lot to do but the second race just shows anyone can have a weaker race. It was very tight in the previous race, they had good speed and got back to us, they were trying to tack us down and we just misjudged one little thing and that was it.” 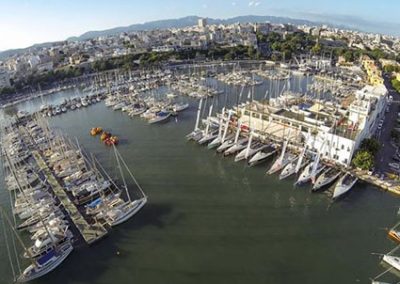 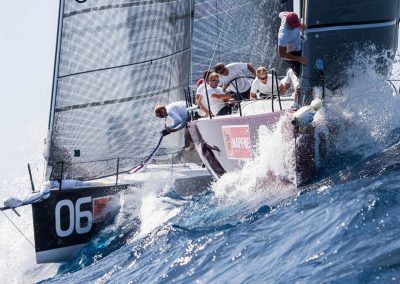 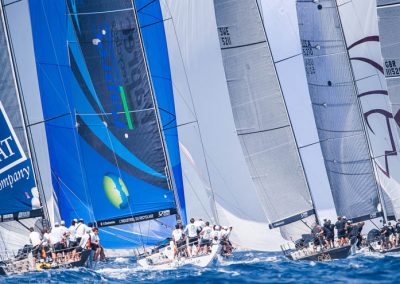