Today the casino is fully open and in 6 knots of breeze the players are sailing from emotional highs into lows so fast that there is no time to reflect on what just happened to you. Race 9 sees all of the sudden Desafio leading the regatta on 45 pts, Bribon are tied on 46 points with Quantum on 46 but the tie break favours Bribon, with Matador dropping to fourth on 47 points. The big right shift on the second beat was the killer for Matador and the gain for Bribon. Breeze is still light, and as you might guess, very shifty, places changing all the time down the final run with different strands of pressure. Desafio very much the dark horse here, but they have started well and stayed consistent.

Race 10, rolling the dice once more!!

15:52:38
Fantastic start, real precision and determination on both Desafio and Quantum mid line and it was Desafio who emerged with their bow in front, Cayard just pressing Quantum thirty seconds before the start, making them tack up and staying with them, so Desafio get away with their bows in front, Bribon start by the boat and Matador are left with space further down the line, Desafio really getting the upper hand, Matador on the left of the course.

16:01:47
Still very shifty, Desafio looked to have jumped a boat length ahead but a right hand shift forced them to tack back into the middle of the lead pack in the middle of the course, Quantum are now out on the right, Platoon extreme left. Breeze six knots. Quantum have tacked back on to port and are ducking the main group. Desafio and Bribon looking best of the middle, lead pack.

16:08:39
Big differences in pressure across the course, Matador, Platoon and Mutua Madrilena are coming in from the high left with good height all the way but a bit less, Matador is on the lay line and could lead.

16:10:44
At the mark it is Bribon coming through to lead with Matador, Mutua Madrilena, Platoon, Bigamist, Audi Q8 who were recalled, Artemis, Synergym ONO, Desafio rolled by Quamtum at the mark, and CXG.

16:19:23
Breeeze has headed a little on this run, Bribon if anything have extended a little on Matador, quite slow going and the need to keep the bow up and keep boat speed up.

16:26:30
Bribon ease around the leeward mark with lead of over one minute from Matador, third will be Mutua Madrilena, and a gap to Audi Q8 who gained two places on the run going more right and direct on the shift, they were just outside Bigamist at the turn, with Platoon behind, Desafio go round ninth on the left mark, Quantum at the same time on the righ side gate mark.

16:34:46
Bribon look to have extended more on the high right but mainly as the breeze is lifting them, but to leeward about 300m Matador are in better pressure and moving quicker, while on the far left now Quantum have hooked into a lane of new pressure, and were going well for a while, but are knocking again. Certainly conflict between different late afternoon breezes, with a growing influence of the gradient and a dying sea breeze, but it is nail biting stuff. Bribon holding their nerves at the moment, but you can be sure there is some chicken dancing going on in their heads.

16:46:43
And that strand of pressure paying off for Matador who round ahead of Bribon with Mutua Madrilena third with their spinnaker up now, ONO and CXG next and close together.

16:48:18
Bigamist round in fifth, it is a slow run, Artemis getting round sixth, Platoon seventh, Quantum eighth ahead of Desafio, Artemis do a penalty. Matador now one third of the way down the run and keeping their distance on Bribon.

16:48:18
Bigamist round in fifth, it is a slow run, Artemis getting round sixth, Platoon seventh, Quantum eighth ahead of Desafio, Artemis do a penalty. Matador now one third of the way down the run and keeping their distance on Bribon.

16:51:50
So it is in the balance on this run, Matador need to keep Bribon behind them to win on countback, with more firsts, winning the coastal race race and winning the last race….if they can hold on that is. But they have made a double gybe and Bribon are working down in better pressure having split to the left, they look to be gaining, but Matador have alway hung on or gained on the final run.

16:56:38
Bribon are on the higher line with better pace at the moment, Matador ar lower and sailing more directly to the line and are visibly slower, it is going to be very very close.

16:58:25
Bribon have gybed and are getting through them, crossing ahead by two boat lengths.

Rien ne va plus. The fat lady sings. Bribon win their first regatta this season, the Region of Murcia Trophy, 47 points, after a desperately close final run there, winning by a single point from Matador, 49 points, who has sailed a great regatta and podium for the second time in a row after Breitling Regatta and Desafio third 51 points. Quantum Racing finish fourth with 54 points.

What a day, well done Bribon. Well done all teams!

Next is Portimao, Portugal, for the final event of the 2008 AUDI MedCup. 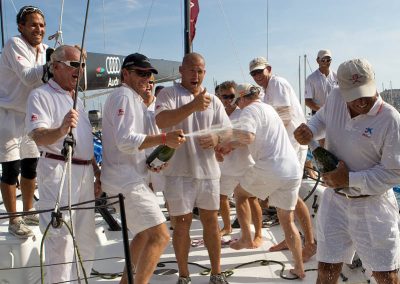 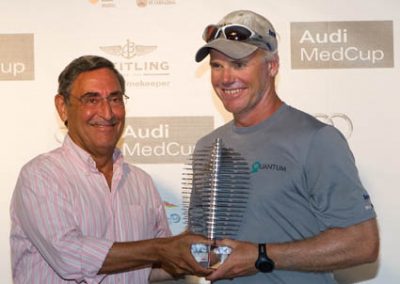 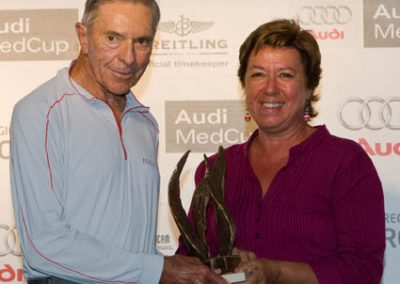 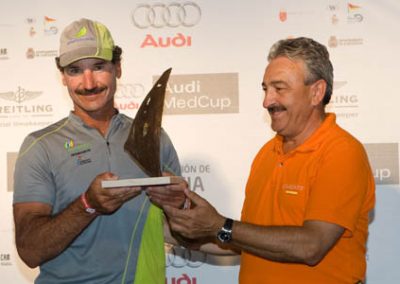 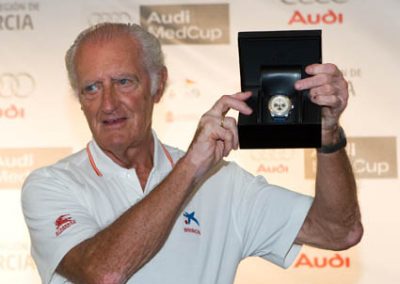 Back
← A shifty place to sail, exiting but tough Oldies but Goldies →