Coastal Day Not For The Faint Hearted

Conditions are traditionally difficult for this race and this year seems no exception.

Headlands that cause all sorts of local effects, nasty chop, puffy.

The course distance is around 35 miles. Breeze from the NW’ly Mistral direction, 310-330 degrees.

The course starts with a short, sharp windward-leeward in the Rade Nord in, probably, around 15kts of breeze before rounding the SW tip of the Frioul islands and heading SE across the entrance to the Rade Sud.

At the Ile Maire and Ile Riou, the islands just around the corner from Point Rouge to the east of the bay, the wind is expected to build to over 20 knots with more on the long run to the turning mark. The mark off Cassis has been deleted from the course this morning, so it is straight back in on a nerve wrecking beat.

Straight after the start the dice were on the table, to be rolled till the bitter end.

All teams had their moment(s) of glory but in the end it was Container who followed a solid run up with an even more impressive show of control and speed in the long beat home.

All4One again caused its fans great moment of pain and joy, not without misfortune, this time by parking the boat on a moonfish. And not without fortune to claw back to 3rd with a daunting move in the beat home. Where others followed the traditional route along the shore All4One stayed “at sea” for a “one-and-in”. It worked…

Azzurra flew downwind and looked set to win when rounding first, but had the misfortune it was Containers day all the way back in. When they threatened to lose 2nd place, which they did for a bit to Bribon, they refound their balance and from then on stayed in fase with the breeze to comfortably finish in 2nd.

Quantum struggled downwind and till half way up the beat was not looking very flash either, hanging around 6th. But then a few clever  moves lifted them to 3rd, only to see All4One comein out of the blue to push them back to 4th.

Bribon, Ran, Synergy and Gladiator all had their moments, but the consistency and/or luck lacked this time. At the finish the boats were very close, but that is not much comfort if you are at the back of the queue.

Few quotes from the horse’s mouth:

Ed Baird (USA), Skipper, Quantum Racing (USA):
“We had a pretty good start but it´s been a little disappointing because we picked the wrong side in the first leg. We managed to get back to the group down the run. It seems that we picked the wrong way underneath the island downwind a little bit, lost everybody at one point. Then we broke our spinnaker and had to catch up from there. It was long and crazy but we got back into the group. We were third and then the red boat came from their position and crossed us by two lengths. That´s the point that made the difference in the overall standings. We have one more race tomorrow and we hope to have a good opportunity to do a good job.”

Víctor Marino (ESP), strategist, Container (GER):
“Overall, it´s been a really complicated coastal race, with really shifty winds. We hoped it to be more stable, but it didn´t happen. The truth is that we sailed consistently in the middle of the fleet, and got close to the leading pack because our boat was going really fast. We trusted the fact that we were going to be fast with strong winds and it happened that way. We didn´t make any mistakes maneuvering and that´s important. The secret was to get close to the leading boats and use the opportunity that they gave us to pick the favored side. Coming back we chose to sail in the middle, avoiding the sides. Once we were first we covered our position well. It´s been a great job, we improve with windy conditions. The forecast says that tomorrow will be a tough day. We are all quite close and Quantum is a very strong boat. We´ll pay for any mistake we make”.

Philippe Mourniac (FRA) navigator Audi Sailing Team powered by All4ONE :
“We were second on the run with the kite to Cassis but we caught a fish of a meter and a half with the rudder! We had to drop the spinnaker and go backwards because after ten minutes we still hadn’t got rid of it…So we were last! After Cassis we had already decided we were going to go offshore hoping to have more stable wind than along the coast. It meant no risk cause we thought the wind was going to shift to the left: that wasn’t the case, but we’ve had more stable wind than on the offshore side. There’s plenty of things that we still can’t do on this new boat: we aren’t in control of everything but the potential of all4one is there. We have to learn and progress”

Markus Wieser (GER) skipper-helm Container (GER):
“I always said we would win a race soon so it is good to get one under our belts. We sailed well with good upwind speed, just all the time learning to sail the boat better and better.”

Kevin Hall (USA) navigator Quantum Racing (USA):
“It was not our best race ever, but we had a lot of good moments and a few frustrating moments to be disappointed in. Container sailed a really nice race. Before the scoring gate we were right alongside them and chose to peel to the A4 but did not have the smoothest peel, and then actually we were looking at making gains in the low lane all the way across and we were worried about getting up to the mark, so if we had taken a little more risk against the fleet we might have played right around them, but we lost a lot of our gain in the lighter pressure to get up to the mark, but maybe if we had lived with it and said ‘ok we have to put the job up to get there’ it would have been different. The score was about what it should have been given how the top two boats sailed today. We would have liked to have gone into tomorrow at least tied, but Audi Red played a little spoiler out on the outside, good on them for making it work. And so tomorrow now we need to get a good start and find a boat to put between us.” 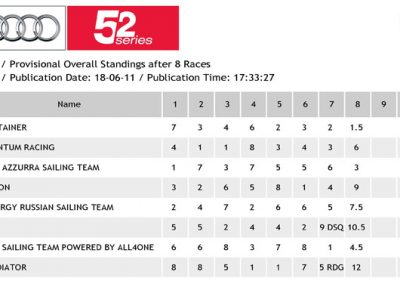 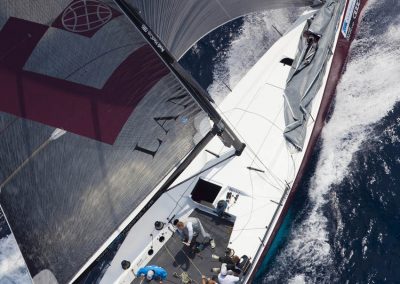 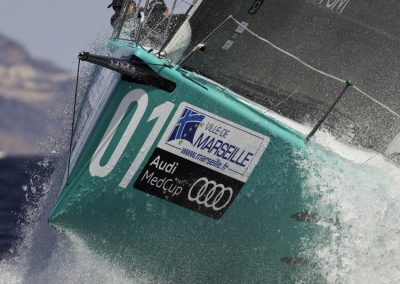 Back
← Drama & Excellent Racing Day 3 Marseille And The Winner Is →