The terraces of the Real Club Náutico of Palma have hosted the presentation of the twenty-ninth edition of the Copa del Rey Audi Mapfre, which will take place on the waters of the bay of Palma between Monday the 2nd and Saturday the 7th of August inclusive.

The 29th Copa del Rey Audi Mapfre has been presented today duwing a press conference held at the terraces of the RCNP. Javier Sanz, president of the Organizing Committee of the 29th Copa del Rey Audi Mapfre, presided over the act, accompanied by representatives of the co-sponsors of the competition, Mapfre and Audi, and M ª Isabel González Carrasco, Sports Councillor of the City Council of Palma.

“91 boats have registered for the current edition, whose level will be higher this year. We remain one of the most important events in cruiser racing in the world”, said Javier Sanz. “The Copa del Rey isn’t immune to the crisis, but we’ve managed to deal with it, and are meeting goals that seemed unattainable just some years ago. We remain true to the model we chose in 2007, when we reinvented the Cup: a regatta with monotypes and compensated time, with professional and amateur sailors, and the best boats”.

“The main novelty this year”, he added, “is the three winners program: one in monotype, one in RI and one on IRC”. The President of the Real Club Náutico of Palma also thanked “the 200 people who are working behind this”.

7 TP52’s from Norway, Spain, USA, UK and Argentina will compete in the IRC division.

The competition schedule includes a total of 12 races from Monday the 2nd till Saturday the 7th of August. 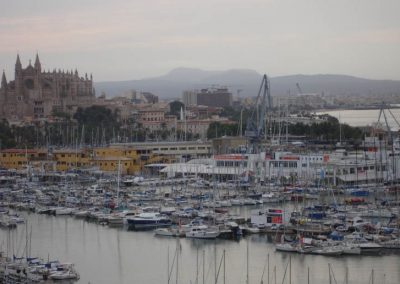