Down To The Wire

As the TP52 World Championship heads into the final day of racing Saturday, could it be the revenge of the countback bridesmaids? Last year in Palma both Quantum Racing and Synergy lost out on first and third respectively on countback to Matador and Artemis. This time they have the upper hand, but only just.

The American team, who won their 2008 world title in breezy Lanzarote and tied on overall points with winners Matador in Palma last Autumn, just got the better of their rivals to win the key second race today.

After a nail-biting opening beat Matador had only just lead around the windward mark but Quantum split away on the run and were able to just squeeze in front of Matador when they converged on the approach to the first leeward gate.

“It is just great racing against them.” Said Quantum Racing’s tactician Adrian Stead (GBR) of the second, cliffhanger race: “ We have of course been racing against them all season and so we know them pretty well and they know us.”

Their 2,1 for the day against Matador’s 3,2 sees Quantum Racing go into the regatta’s final day with a small cushion, their reward for now only once finished outside the top three over the eight races to date.

In third place overall remain Russia’s Synergy team, who finished fourth last year, losing their claim to Artemis’ third on countback. This time the Russian crew, with Kiwi Rod Dawson doing sterling work as tactician, lead Artemis into the final day by a margin of just one point. But their day’s work today was marred by disqualification from Race 7 after a protest against them by Audi A1 powered by All4ONE (FRA/GER).

Noticeably today the pairs of duelling protagonists often stayed within the same stretch of water as the regatta nears its conclusion, with more protective rather than attacking tactics evident.

Race 7
It was John Cook’s Cristabella (GBR) which triumphed in the first race, the fifth boat to win a race at these 2010 World Championship. They started with speed off the pin end of the line and were able to gain leverage on the fleet out on the left side of the course. Quantum Racing finished second with Matador containing Audi A1 powered by All4ONE for third.

Race 8
In 6-8 kts of sea later afternoon sea breeze Quantum Racing started mid-line and Matador at the committee boat end of the start line the duo tussled for the lead on the approach to the windward mark. Matador got round just a boat length ahead.

They went to the left down the run and made an initial gain but Quantum Racing found slightly more pressure and a small favourable shift in the dying breeze went slightly right and only just crossed ahead of their rivals.

As they rounded the leeward gate, Quantum Racing rounded the right hand gate mark and gained a small jump as the new breeze built more from the right, while Matador suffered a little.

Quotes of the day:

Adrian Stead (GBR), tactician Quantum Racing (GBR):
‘Its going to go down to the last race I think. Matador sailed a very good day today and we sailed slightly better, we got some good starts we sailed the boat fast and I think the key was in the second race today getting past matador on the first downwind and that sort of made a little difference to the day.”
“But we were really pleased we got two races today, Maria and the team did great. Great team effort today, it was good to bounce back after a disappointing race yesterday. We are really pleased”.

On the key second race against Matador (ARG):
“At best we were even. (on the first beat) In terms of bearing there was not much in it. It was one of those where we could have closed them down, but in the end they got their tack in with a boat length to spare. They forced the decision on whether we go behind them and we then got them down the run.”
“ We were happy to split with them. They did well to start with but then they had to come back against the shift which just got us across. But it just goes to show how incredibly tight the racing is. That was probably decided by the result in that race which was effectively a two pointer, decided by a one degree shift. It could have gone either way, so it is great stuff.”

John Cutler (GBR/NZL), skipper Cristabella (GBR):
“It was surprinsingly good for us. We got a great start and we didn’t go for very far and then the breeze went left and we tacked and we had more pressure than the fleet,  so we went back across and were comfortable.
So it was quite exciting. We had a nice race, sailed on our own, so we are happy about that. Normally our races are really close and it was nice to just sail round five or six lengths in front. We were relaxed. I’ve sailed with Nacho Braquehais on this TP52 when it was Desafío and it’s really helpful to have a local strategist, someone I know as well.
So there’s a lot of talk about what’s going to happen next so he’s helping a lot and making our lives much easier”.

Rod Dawson (NZL), tactician Synergy (RUS):
“You have now got a few boats at the top of the fleet who are all very close, so everyone is tacking on each other, and trying to defend not only their place in the race but their position in the overall regatta so you can actually see people going to the side of the course more with their opposition, than where they think the wind is going to come from. In the end I think the top boats have come to the top and obviously Quantum and Matador are very fast boats in the light air and those two showed their ability.
But we are pretty happy with were we are. The light air we had today, 7 to 9 knots is not quite our optimum conditions for the boat so to come away from a day like that with two fours we are really happy”.

Francesco Bruni (ITA), tactician Matador (ITA):
“It was a good day today cause we made just an average start in the first race but managed to pass several boats thus finishing third, just one point behind Quantum, so we are really happy with that. In the next race Alberto did a great start, it was really the best of the championship up to now, the boat was going fast and we were first at the top mark and then we went for a jibe set but on the run there was a right shift of around 20º and Quantum passed us, it was a pitty, but it was a decision we made with the head, ans sometimes your are right and some you are not, and you have to live with that. Because the distance to Quantum was so small, we had to make a decision, we just couldn’t keep chasing him”. 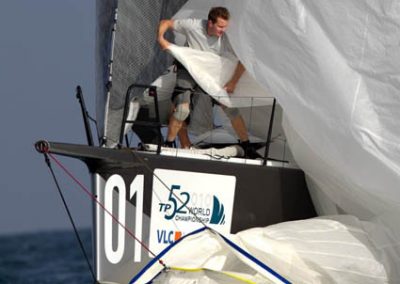 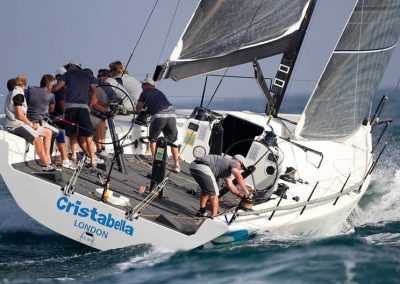 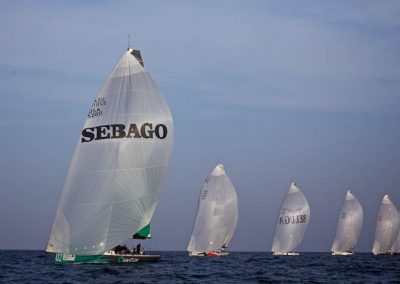