In a real rarity and a true testament to outstanding sailing, winners of all four classes at the Acura Miami Grand Prix went wire-to-wire. Ran (IRC 1), Soozal (IRC 2), Nerone (Farr 40) and Bliksem (Melges 32) all led from start to finish, a remarkable feat, but they hadn’t clinched going into the final day and all sailed every race.

Competition was tight in all four classes of this powerhouse fleet of 42 boats from seven countries, but the Farr 40 was deemed to be the most competitive and that earned Nerone the Acura Boat of the Week honor. The Italian entry won six of 10 races, an almost unheard of achievement in the professional-laden Farr 40 class.

America’s Cup (and TP52) veteran Vasco Vascotto called tactics on Nerone, which also won this regatta in 2000 and 2003. “We love Miami. For some reason, our boat and team performs very well here. We have never had this many firsts in one event… it really is unbelievable. We were very, very fast downwind and I think that was a big key.”

Jeremy Wilmot, a member of the intercollegiate dinghy team at powerhouse St. Mary’s College of Maryland, called tactics on Bliksem, the winner in Melges 32. The Australian native was skipper of the TP52 Morning Light program and served notice he will make a fine professional one day.

“Jeremy was just awesome this week. He is a young guy, but a real natural talent. He sees shifts about a minute before the competition, which was a huge advantage for us.” commented Pieter Taselaar, his dutch skipper.

Owner Dan Woolery and close friend Scott Easom spent a year gearing up to sail Soozal in the two winter regattas organized by Premiere Racing. The King 40, designed by Mark Mills and built by Summit Yachts, has proven a real rocket ship by capturing IRC 2 class at both Acura Key West 2009 and the Acura Miami Grand Prix.

Veteran professional Robbie Haines called tactics on Soozal and drew high praise from Woolery. “Robbie was excellent as usual. He is just a wizard at calling the shifts and deserves a lot of credit for our success” he said.

“We had really fantastic conditions here in Miami this week. It was sunny and windy every day, which made for fun and exciting racing,” Peponnet said. “We are very happy with the performance of our team. Everyone did their job well and we made very few mistakes.”

Ran was a double winner yesterday as it also captured the Acura Grand Prix Championship Trophy, awarded to the boat with the best combined performance in Key West and Miami. Zennstrom’s team won six of 10 races in taking IRC 1 class at Acura Key West 2009 as well.

“We had very good competition with Rio here and in Key West. It was like match racing. They have a good team and really pushed us hard,” Peponnet said.

Temperatures in the 80s, sunny skies and winds that never dipped below double digits made the 2009 Acura Miami Grand Prix one of the best in recent memory.

“I don’t know if I have ever seen so many happy faces leaving a regatta,” event director Peter Craig said. “The weather was phenomenal, the race committee work was outstanding and the competition in all four classes was very, very good. All the owners I spoke with are looking forward to coming back.” 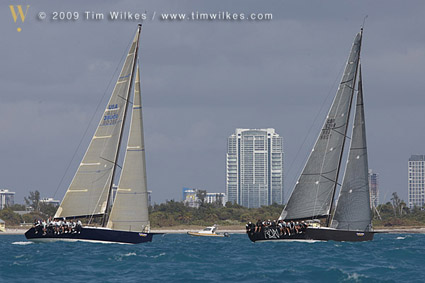 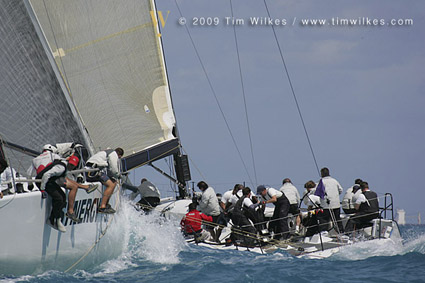