The Podium is Open in Sardinia

The first regatta of the 52 SUPER SERIES 2015 proved there is no real hierarchy established in the white hot TP52 fleet this early in the season. With a very high proportion of race teams still looking to get the best, the final 10-15% per cent of performance, from their newly launched 2015 boats, it is widely believed that any one of six or seven teams have already proven they have the credentials and the hardware to win a regatta this season, and there is certainly no outstanding favourite to win the overall 52 SUPER SERIES 2015 title. Due to long planned business commitments last month’s Ford Vignale Valencia Sailing Week regatta winner Rán Racing’s owner Niklas Zennström, and his crew, are unable to race in the second of the season’s five regattas, next week’s Settima Delle Boche hosted in Sardinia by the Yacht Club Costa Smeralda. But the nine boat fleet will still comprise eight new 2015 TP52s. Valencia revealed five different boats as race winners. Four teams won two races and Azzurra, who will be on home waters next week, won three, and two different boats – Rán and Andy Soriano’s Alegre – lead the regatta at different stages.

There are several fundamental changes which will add yet more interest and excitement when the world’s leading grand prix monohull circuit races off Port Cervo.  For one thing the focus moves from Valencia’s programme of all windward-leeward races to an itinerary which should offer at least two Coastal Races. On the spectacular Costa Smeralda the world renowned coastal race tracks offer a completely different set of challenges, often rewarding well prepared strategies and course reconnaissance as well as split second tactical and navigational decisions. And the wind conditions in recent years have produced spectacular, physically demanding racing. Two coastal races are likely but there is a hope that one day may include a windward-leeward and short coastal to maximise the variety and really  put the teams through their paces.

Quantum Racing, the 52 SUPER SERIES 2014 champions, return to a more familiar line up, closer to that which won the World Championship on these hallowed waters one year ago. As per the pre-season planning Terry Hutchinson is back on board as tactician to work with owner-driver Doug DeVos. They are supported by Adrian Stead as strategist and Juan Vila as navigator.

Project director Ed Reynolds comments on the return of Hutchinson to Quantum Racing which finished sixth in Valencia:
“This year is very different to past years. We have three different helms programmed over the season and in particular Doug just loves to sail with Terry. They feed off each other and Doug enjoys what Terry brings to the boat. It is a really different dynamic on the boat. Terry is much more the puppet-master on everything. There is a different decision making process.”
“ We could and should have sailed better in Valencia. We are all so much looking forwards to having Doug on board steering. He brings a huge, infectious passion and is so driven.”

Quantum Racing did not win a race in Valencia but have won each and every one of the Costa Smeralda stages of the 52 SUPER SERIES since 2012. In Porto Cervo last year they won the five race series by two points from the Brazilian TP52 Phoenix which is expected to rejoin the circuit in Palma.

Azzurra took some time to really start firing on all cylinders in Valencia but finished with a flourish, winning both races on the final day to return to the Yacht Club in whose colours they race, the YCCS, brimful of confidence:

“ We are confident as always.” Highlights Azzurra skipper-helm Guillermo Parada. “In fact winning the last day doesn`t actually change our approach. I think it is more what it says to our rivals, and especially in helped us on the scoreboard ! And we have to sail clean. In Valencia we learned that doing a penalty once  the spinnaker is up is very hard, so we hope not to have any more of those ones.”

Costa Smeralda has been a successful hunting ground for Andy Soriano’s Alegre crew and holds no secrets. They won the MiniMaxi world championship on these same waters last year and, with their close second in Valencia highlighted their potential as title contenders, while fellow 2015 circuit debutants Bronenosec – have a strong Italian afterguard with a lot of Costa Smeralda experience – and also won two races in Valencia.

Racing starts Tuesday with the final prizegiving Saturday. The podium awaits but just which three teams will fill the top spots is absolutely wide open. 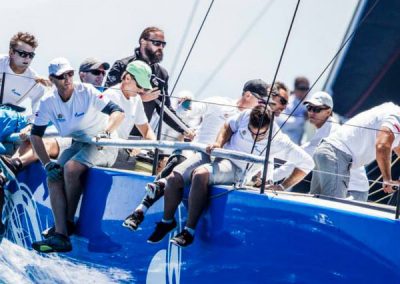 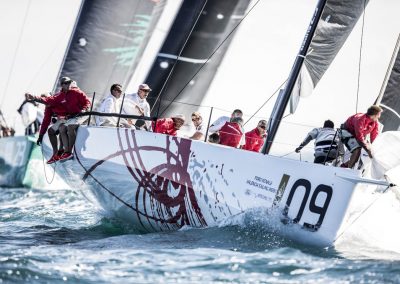