Winners of four of the five regattas this season, Quantum Racing were crowned 2016 52 SUPER SERIES champions in Cascais, Portugal on Saturday evening. The American-flagged team – who has also won the circuit in 2013 and 2014 – secured their third 52 SUPER SERIES title on Thursday with two days to spare, finishing Saturday with an overall aggregate of 140 points after 45 races contested in Scarlino (Tuscany), Porto Cervo (Sardinia), Puerto Portals (Mallorca), Mahón (Menorca) and Cascais (Portugal).

Niklas Zennström’s Rán Racing Team take third step on the season’s podium after a nervous final day showdown against Ergin Imre’s Provezza and Harm Müller-Spreer’s Platoon. Rán Racing fought back spectacularly from a penalty at the final mark that dumped them into last place, but quickly rallied to a critical fifth place, which ensured they take third for the season. Just as last year’s battle for third overall was decided on the last race of the season, so it was again on the same waters in Portugal. Rán finish on 241pts, Platoon on 245pts, Provezza on 248pts and Bronenosec on 251pts.

On Friday, Provezza had earned a tentative grip of third place but a bitterly disappointing run of 9,9,9 from their last three races saw them crumple to fifth overall on the season’s standings, losing out to Platoon who had brought in John Kostecki as tactician for their final push.

Quantum Racing have set an exceptional level from the start of the season. They served notice of their intentions when they won the pre-season warm up regatta Gaastra Palma Vela. Four different teams led at the opening regatta in Scarlino, Tuscany but it was Quantum Racing who prevailed. Doug DeVos’s team won the 52 World Championship title in Mahón, Menorca in September also. Between last season and this season, Quantum Racing had won six regattas on the hop. But the resurgent Azzurra team were back to their imperious best in Cascais where they won four of the eight races and held the overall title winners to second, eight points behind.

There has been no dark magic nor no reliably boat speed silver bullet for the Quantum Racing crew. Their success has been down to the unrelenting daily grind, seeking perfection on and off the water by the entire team, at regattas and between events.

It has been widely acknowledged by many members of the Quantum Racing crew – not least Terry Hutchinson – that the catalyst for this never ending pursuit was finishing second overall to Azzurra last year.

Similarly when he stood on the dock in the Marina de Cascais, relieved and contented at their final day regatta win, Azzurra’s skipper Guillermo Parada in turn paid tribute to the high benchmark set by Quantum Racing that forced them to up their game. Azzurra made significant gains since mid season, July in Puerto Portals and since then won nine of the last 18 races.

With the top two teams now seemingly on equal terms, a mouth watering opening to the 2017 season is already anticipated in Key West, USA in just twelve weeks time.

The key difference has always been Quantum Racing’s ability to grind out rock solid sequences of top-fours, or at worst top-fives, avoiding the weighty ballast of double digit scores from the basement of the fleet. This year has been the most competitive yet with 13 different boats competing. Ed Reynolds, the long serving Quantum Racing boss who has been at every single TP52 event since 2005 explained: “The biggest thing that we focussed on this season was never crashing down to a big number in a race. Everybody seems to focus on two boat testing, trying to be the fastest boat, but more often than not, we’re not the fastest boat out there. But we’re never the slowest boat. Trying to develop sails that are good for racing, and not just to win tuning setups has given us a lot of awareness. You always hear about shifting gears on boats, well, we really focussed on our first, second and third gear. Getting off the line or when you get into trouble, when you have fine lines or really thin lanes, you have to have a completely different setup than when you’ve got the bow out, sending the boat. Probably the biggest thing we saw this year was that we were never slow. We weren’t always the fastest boat on the course, and a lot of the other boats were set up to win races. If you look back on our history, we don’t win many races, but we rarely get out of the top four.”

The final day of the season will remain one of the most memorable of the year. Azzurra went into the final race with a lead of three points. They sailed an impeccable first beat – beating bow to bow with Quantum Racing, striving for the smallest advantage. At the top mark Azzurra were just ahead of Sled. Quantum Racing slid to a sixth place finish, their worst result of the regatta.

The overall podium for the EGNOS 52 SUPER SERIES Cascais Cup is composed of the same three teams as in 2015. Last year Azzurra clinched the circuit title when Quantum Racing won the Cascais Cup. Both times Takashi Okura’s Sled have finished third at this regatta.

Niklas Zennström was delighted at Rán’s third overall for the season, also lifting the top owner-driver award: “It was a pretty stressful day. But it also shows how tight the class is this year and I think we had Provezza, Platoon and Bronenosec. Third place overall is the most important thing for us because its also about us being able to race against the best in the world, against Azzurra and Quantum and some of the other really good pro drivers. And so to be third overall for the season trumps being best owner driver. It was pretty tight, we got a penalty. Then you say ‘shit we’re last’ but you just have to keep fighting. It’s all about fighting til the last second.”

Provezza’s Tony Rey was disappointed to drop so much on the last day: “We had a great season but today was a tragedy, there’s no sugar coating it. We started off the day in fourth, just a couple of points behind. Bit by bit we closed on Rán over the last two events and ended up as close as you can get. But we couldn’t get it done this afternoon. We bled points throughout the season doing different things here and there and it all came down to today and we couldn’t get it done. But that’s sport and you just have to live with it. We’ve learned an enormous amount, we joke that we’re tired of learning and we just want to go win now.”

Quotes
Guillermo Parada (ARG) skipper-helm Azzurra (ITA): “It was obviously a good day for us. Finishing the regatta with another win and winning the regatta is a good feeling, but obviously it’s important to keep learning, because Key West is around the corner and we need to put our minds straight into that, otherwise we are going to be late again, as we were at the beginning of this season.”

Ross MacDonald (CAN) tactician Sled (USA): “Third in the regatta, and it’s fantastic. Great week for us, and a great way to end the season. It’s kind of surprising that the first three boats from the end of the season last year are one, two, three at this event. It gives you a little bit of a reflection about what we did for the rest of the season. We focussed on our speed more than anything. It allowed us to stay with the fleet and be relatively conservative. Even if we had a bad start we knew that we were quick enough to get back into it. We had some ups and downs with our starts, but they’re coming along and I think the one thing we’re doing a really nice job of is accelerating the boat at the start.” 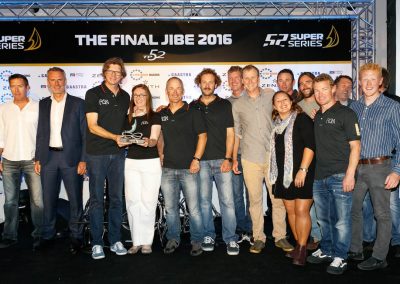 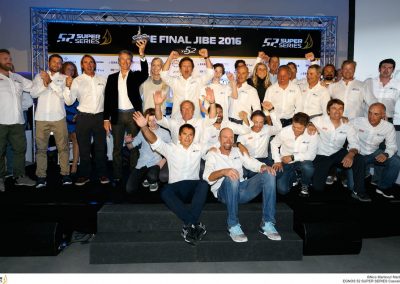 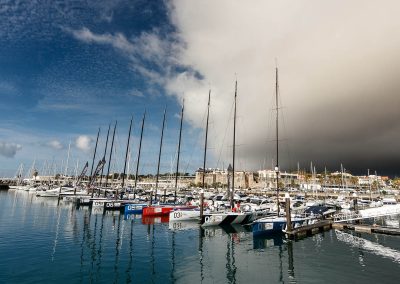 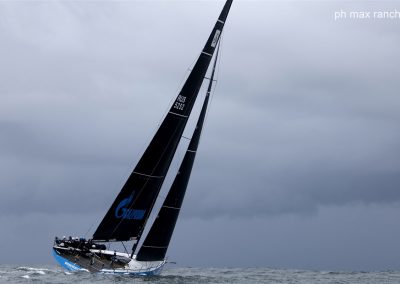 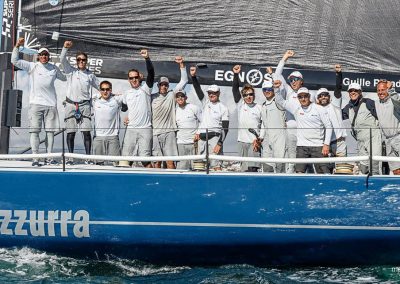 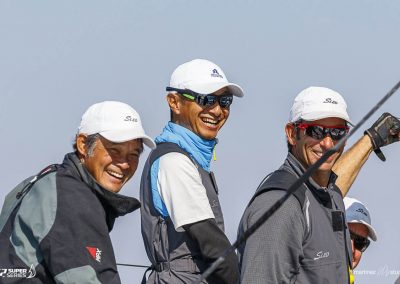 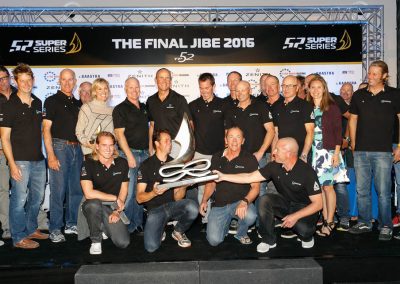 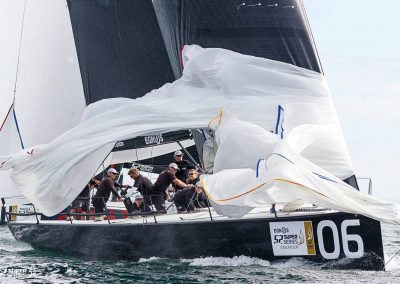 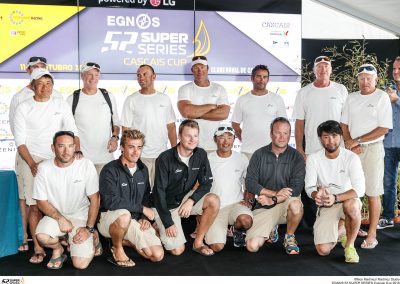 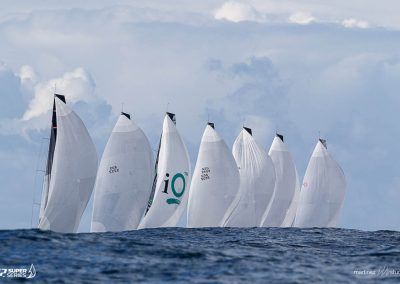 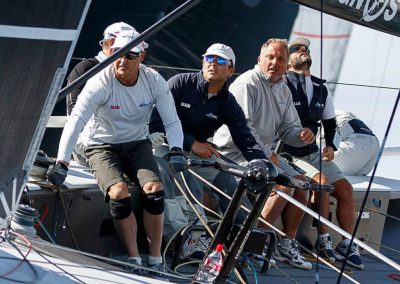 Back
← The TP52 World Champion is Quantum Racing!!