Overnight, light winds brought a steady stream of competitors up the Derwent River to the finish line, filling the Rolex Sydney Hobart race village in time for the New Year’s Eve celebration. All eyes were on Quikpoint Azzurro, the dark horse and smallest boat in the fleet, and for most of Wednesday afternoon Shane Kearn’s Sparkman & Stephens 34 raced towards the finish on pace to potentially claim the overall win on handicap. The 34-footer needed to reach the finish line by 0443 AEDT Thursday.

Paul Clitheroe, owner of TP52 Balance, was on tender hooks, checking the race tracker constantly to chart their progress. Commenting on the impressive achievements of his closest competitor, Clitheroe said that after such a long and challenging race it would be unfair for Quikpoint Azzurro to sit just metres from the finish line should the wind die.  Yet at the mouth of the river, the hopes of Quikpoint Azzurro  were dashed.

Clitheroe realised that he and his team had clinched the title upon calculating that Quikpoint Azzurro had half an hour left to finish, yet several miles to cover. “We knew it was a great little boat, but we just couldn’t see them doing 22 nautical miles, with just four knots of wind, in half an hour,” so Clitheroe asked his crew to hop back on a plane to Hobart to help claim their prize.

The 60-year-old financial consultant and TV presenter known as the ‘Money Man’, Paul Clitheroe has been advising Australians for decades on sound, long-term investment strategies.  Not unlike his approach to yacht racing, where planning and thorough preparation are key.  Yet when it comes to winning, he adds passion, teamwork and pure dedication to make the difference.

Elated about his win, Clitheroe commented: “They kept me up all night! In what sport are you going to get a modern, carbon 52-footer up against an old 34-footer bought on a credit card.  Either of us could have won it within five minutes.  It’s crackerjack!”

Paul Clitheroe and his crew were presented with the Tattersall’s Cup and engraved Rolex Yacht Master timepiece onboard Balance and following at a public prizegiving on Constitution Wharf.

At time of press, 75 yachts have finished, 31 retired and two yachts are still racing but expected to arrive in time for the official Rolex Sydney Hobart Yacht Race prizegiving will take place Friday, 1 January 2016 at 1000 AEDT at the Grand Chancellor Hotel in Hobart.

Other TP52s in the race:
– Celestial, owner Sam Haynes, 3rd in class and 29th overall IRC.
– Ragamuffin 52, raced by Brenton Fisher, finished 2nd overall and in class, BUT after a protest hearing a time penalty of 20% was applied under SI 20.1(b) for failing to comply with RRS 19.2(b) in an incident with ARK 323 shortly after the start. Corrected results, 5th in class and 38th overall.
– Ark323 – Retired, damaged in incident with Ragamuffin 52.
– Cougar II – Retired. Mutual protest by and against Lupa of London for an incident after the start. Cougar II found to have failed as port tack boat to keep clear of Lupa of London but as both boats had retired no penalty could be applied. Tasmanian boat Cougar II returned inside an hour wearing the most damage, with an entire corner ripped off the stern after an incident with the bigger Lupa of London.
– Frantic – Retired – Torn Mainsail
– GYR Wot Eva – Retired
– Koa – Retired – Steering damage
– M3 – Retired – Broken Forestay

The Balance Story.
For Clitheroe, who turned 60 in July, this is the first time he has won the Cruising Yacht Club of Australia’s 628 nautical mile race, but not the boat’s first time. As Quest, it won the 2008 race for Bob Steel, and aboard again were two of his winning crew, sailing master Mike Green, a veteran of 37 Hobarts, and Adam Brown, a veteran of 29 races. Green also won on a previous Quest in 2002 and took line honours on Ninety Seven in the storm ravaged 1993 race. Brown, was with Green in 2008 and 1993, with an additional overall win on Ragamuffin in 1992.

CYCA director Paul Clitheroe purchased his fifth Balance mid-last year and it has won two Sydney Hobarts from just five attempts. The 10 year-old Farr designed yacht has represented great value for her various owners, with other great results to her credit. “It’s an absolute honour to win this great race. I thought the little boat had beaten us, until the Derwent River decided otherwise,” Clitheroe said. “When you put a dumbo like me on a boat as good as this, it’s easy to win. In fact Greeny and Brownie are relieved when I leave the helm,” Clitheroe said, understating his value. “The CYCA does a fantastic job of organizing the race and making sure everyone is safe. I thank the sponsor, Rolex and the Royal Yacht Club of Tasmania, all the volunteers and everyone involved – it is a mammoth exercise. And to my crew; Greeny and Brownie are two of the best – and the rest of the crew who do an outstanding job.”

Of the conditions, the Sydney yachtsman said: “We had the hell beaten out of us on the first night and then it was pretty light in Bass Strait. The boat would launch into the air in the first 24 hours and you would count one, then two and if you get to three, (a crew member interjects: ‘You get the cheque book out’.

Clitheroe had a fall on the boat and hurt his back, and was aware of others in the race who came off second best, including Black Jack’s owner Peter Harburg who broke a leg, and Victoire owner Darryl Hodgkinson, who cracked ribs. “What other sport do you know of where competitors stop and help others in trouble? We have a great sport and I’m lucky to be involved in it,” he said.

Clitheroe was convinced Quikpoint Azzurro had beaten them and so half the crew went home, back to their jobs, only to receive a phone call from their skipper to “get on a plane fast and get back here. We thought they’d beat us by three hours, and after all their efforts, I hoped they get home quickly, but it wasn’t to be.” 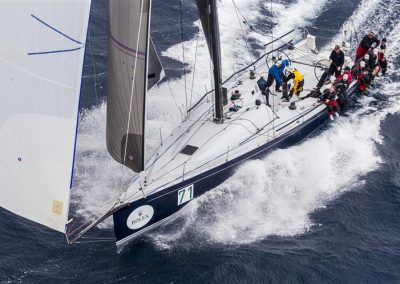 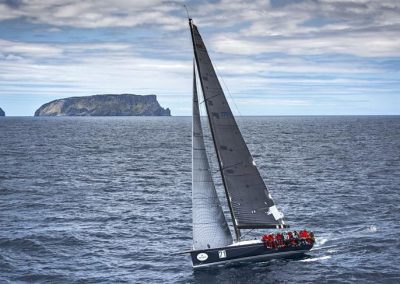 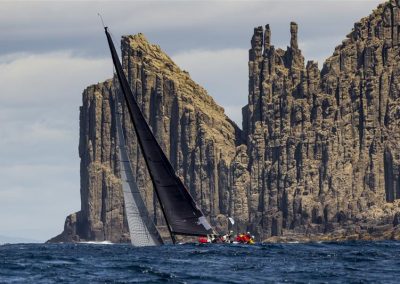