“Another fantastic day of sailing in Key West. Days like this are why we come here. The conditions were outstanding,” Melges 24 skipper Riccardo Simoneschi said.

Simoneschi is a two-time winner of Acura Key West, presented by Nautica. The Italian skipper posted a solid line of 4-3 on Tuesday and holds third place overall in Melges 24, largest class in the regatta with 33 boats.

Another Italian team continued its impressive performance in the professional-laden Farr 40 class. Mascalzone Latino, owned and driven by Vincenzo Onorato, has won three of four races with the other result being a second. Briton Adrian Stead has been on fire calling tactics for the three-time defending world champs, who hold a comfortable six-point lead over Acura Key West 2008 winner Barking Mad.

“We are sailing well, but obviously not nearly as well as they are,” said Terry Hutchinson, tactician for owner Jim Richardson aboard Barking Mad.

Hutchinson was just named Rolex Yachtsman of the Year by US Sailing, but is not afraid to admit that he can pick up a few subtle nuances from a team that is clearly at the top of its game.

“We have learned heaps in two days just from watching Mascalzone… how their sails are set up, how they are driving, what they are doing tactically,” he said. “It’s not over yet. There are still a lot of races left. We just have to keep chipping away and hope we’re in range going into the last day.”

Action is heating up in IRC 1 as well after Rosebud/Team DYT stretched its legs and showed its prowess in the heavy air. The STP 65-footer, largest entry in the regatta, won Race 3 then finished second in Race 4 by 34 seconds on corrected time. Ran, a TP52 owned by Niklas Zennstrom of Hamble, Great Britain, now has an impressive line of 1-1-2-1. 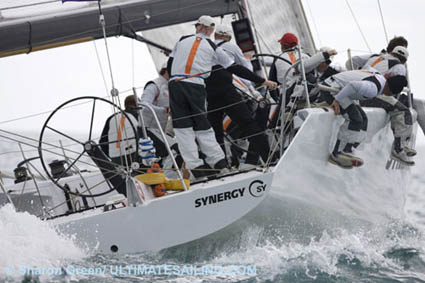 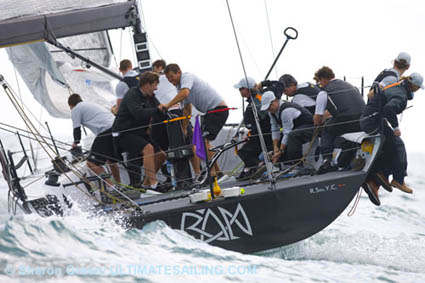