Can Azzurra check out of 2015 with double top?

Their double bullet, dream day, as they count down to their season’s title winning line, also gives them an overall lead of five points over Quantum Racing in the regatta standings for the Cascais Royal Cup. The perfect double in on for the Roemmers family team winning the circuit and winning the fifth and final regatta of the season. If they can it would be their third regatta win, after Sardinia and Puerto Portals.

Azzurra proved how comfortable they are in the big breezes when they clinched Settimana delle Boche regatta title in Sardinia on a day when the wind scale rose to 30kts before racing was canned. There, on their home waters, they were in a class of their own. And so it pretty much was again today, tactician Vasco Vascotto confirming they saw 28 knots in the gusty NW’ly breeze today.

Quantum Racing had their own double win on Thursday. But they could only reinforce that today with a hard won fourth – which came after a start line penalty left them languishing in the dark depths of the pack on the first beat – and then a sixth. Their choice of the early right from the start line was not as profitable as previously. The breeze proved stronger offshore, a fact identified by the super confident, on form Vasco Vascotto, and Quantum Racing were on the back foot early on in what proved a very tightly compacted first beat.

And there is just no let up in the utterly compelling battle for third step on the 52 SUPER SERIES podium. Platoon substantially enhanced their claim today with a pair of solid, well deserved third places today. Ergin Imre’s Provezza crew took six points for the day with a 4,2. But fortunes were not so rosy for Sled – who broke their outhaul on the start line of the first race and could only struggle to 11th place – and for third place rivals Bronenosec which exploded a spinnaker – at least their third, if not their fourth of the season – on the first run of Race 5.

Race 5
Provezza started well in the first race and got to the right side early, ahead of Azzurra. But Azzurra found substantially more breeze down the first run, erring to the left closer to the shore and were ahead by the leeward gate. Despite a last second kite glitch they still pipped Platoon to second on the line while Azzurra crossed the line a long way ahead.

Race 6
The race area was moved slightly for the second race of the day. With some bias on the pin end of the line Azzurra were happy to push for this early gain which very quickly allowed them control of the fleet. Andy Soriano’s Alegre worked hard for a good second place, accelerating their climb up the leaderboard after a nightmare opening of 12,10,11. They showed their true mettle today with a 5,2 to lie sixth overall.

Patience may not always be perceived as one of the virtues most readily associated with Azzurra’s tactician  Vasco Vascotto but he claims he does not mind exactly when their title is sealed, be it tomorrow Saturday or Sunday, as long as it comes…. ” I don’t care if its tomorrow or the day after the important thing is that it happens because for us, I think the Roemmers family have put a lot of effort to try to win this circuit and if that happens it will be fantastic for us, we will have a nice night all together.”

Today, Friday, might prove to be the breeziest day of the Cascais Cup. As is often the case the stronger winds and big waves exposed any late season weaknesses. Spookie, leaders after the first day, are reported to have torn two mainsails and the mechanical breakdowns for Sled and Bronenosec may yet prove pivotal.

And so the last two days of the 52 SUPER SERIES 2015 look set to deliver a completely engaging range of human emotions, from ecstasy to deep frustration. But for sure when the season hits the buffers Sunday afternoon there will be no doubts that this has been a great year for the TP52 Class.

Quotes:
Vasco Vascotto (ITA) tactician Azzurra (ITA): “I think that we had a very nice day. When you have a crew like we do I think it is easier because you are confident to do every single manoeuvre or ___at the top mark or one more jibe than everybody else because you are just confident that that jibe will be good and you can push harder at the bottom mark and jibe with just thirty seconds to go and take the right marker. So I think that this kind of result is because we have a fantastic crew that have the right attitude for every single minute and for me it is becoming easier. I think we also sailed well today because I think that we made the right call in the last race to start at the pin it was light wind on the right and we started going right at this time and there was a lull on the right so the pin was the favourite so you have to take a risk to win the pin in this kind of condition. We have two different strategies compared to Quantum. Quantum starts on the committee and tack, still the right is favourite but you need to be sure to stay inside the wind and I think that we did a great job. Everything works very, very well. I think it is great fun and also watching this kind of regatta with 25kts at the top mark or more, 28kts we saw. I think that Guille drove the boat very well and everybody put the right amount of strength to try to win this.”

Ed Reynolds (USA) team director Quantum Racing (USA): “ It was a tough day and it happens almost every event with all the boats, you have a great day and then the next day – It’s up and down so the most important part is jjust keeping a smooth steady attitude through it. Tomorrow is another day, today I think was a little frustrating because we got what we wanted off the start, ended up getting called for a penalty. I think people thought we were OCS but it was a penalty. Which, I think, that one we were set-up to get what we wanted off to the right and then the second race- the right was still right, the pin was so favoured. The right has been so strong, we got a perfect start headed to the right but it was just the one time it completely caved in. It’s easy to look back and say it was a mistake but it was pretty much just playing the same odds that we have been using most of the week so sometimes it bites you and sometimes it doesn’t.”

“Tomorrow it’s just the same thing, they [Azzurra] have got the momentum and they’re pretty loose, they really have nothing to lose at this point. We’re kind of locked in where we are I think, the points are pretty strong. We would like to win the event and we’re really focused on winning the event so it’s frustrating to take a step back but tomorrow is another day and yesterday showed we are capable of getting on a run and doing pretty well.”

Tony Rey (USA) tactician Provezza (TUR): “We had a great day. Honestly if you had told us we’d cop six points at the end of the day we would be ecstatic, it’s a hard battle out there We actually lost a place in each race which is frustrating and we will debrief the hell out of it I’m sure tonight but to be honest I let the guys down a little bit on a few lay-lines. We have got a new navigator here this week and we’re learning how that works together and by Sunday we’ll be tight. It’s going to take us until Sunday to work it out though.”

What made the difference today? “ Andy and the guys did a great job on the starting line and typically our boat handling has been a weakness in this type of condition and the guys honestly did a great job, everyone was excellent and we pushed the boat harder than we have and we came out with a reasonable race. We hope we have another windy day tomorrow.”

Having John Cutler in the coach boat?
“ It’s been great because he [John Cutler] knows the boats but he’s been outside enough that he has a really clean perspective on things and it’s been a pleasure to have him here and the guys are loving it. He’s a tactician so most of his input tends to be tactical. He’s been great he’s given us a really good all round spectrum on the set-up and just the general differences. It’s been really helpful on just a few little things around the boat and keeping it light too, he’s got a great spirit to have as part of our team.”

Markus Wieser (GER) tactician Platoon (GER): “So it is all good……for the moment. We feel more comfortable in the breeze. The boat moves a little better in the breeze and we struggle in the light winds when the positions are shifting up and down with the pressure we struggle a little bit more. But today we had a game-plan and we executed it very well. For sure that was to go right, we had average starts but we had a really good boat speed and we came through the middle a little bit and we were fourth on the upward mark in the second race today. Downwind we sailed very conservatively because we wanted to avoid the other boats so we sailed a bit slower so we were fighting upwind and then downwind we were just defending our position a little bit and it worked out very well today. Our upwind speed is very good, our starts were a little bit average today but our upwind speed was very good. It’s about the feeling of the boat if it’s loaded up Harm likes it on the helm. If it’s light we are still struggling with the boat a little bit but it’s our first year in a TP together and we learn every day.” 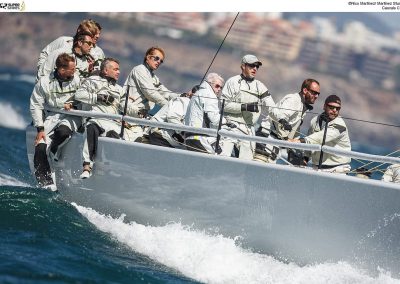 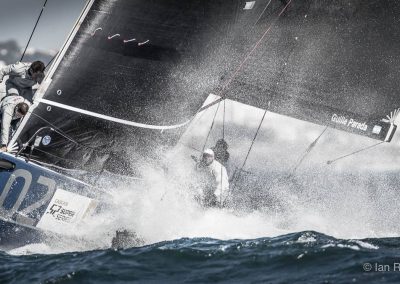 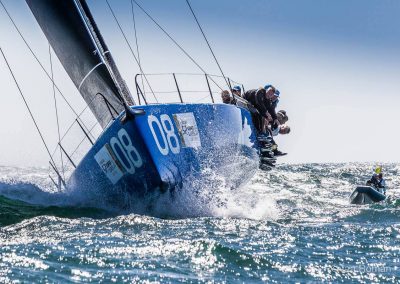 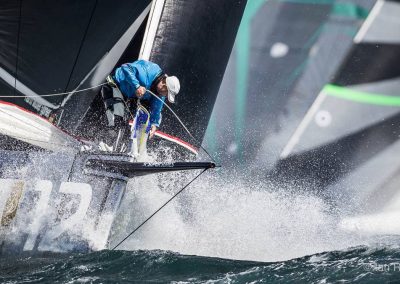 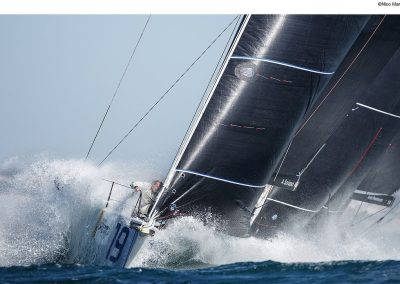 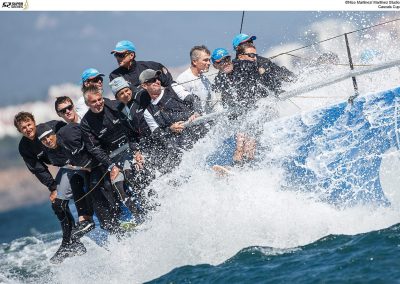 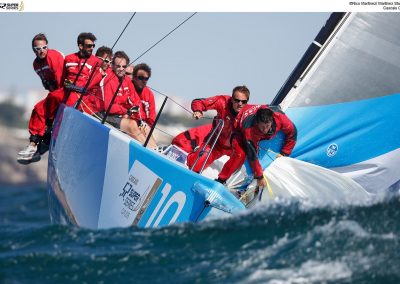 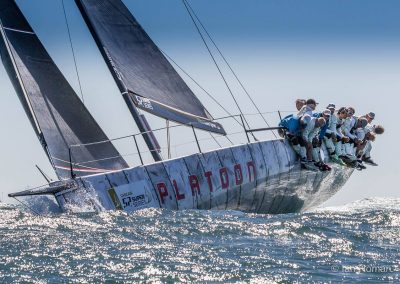 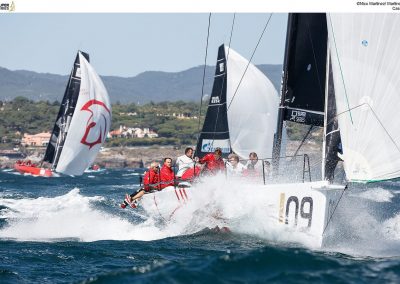 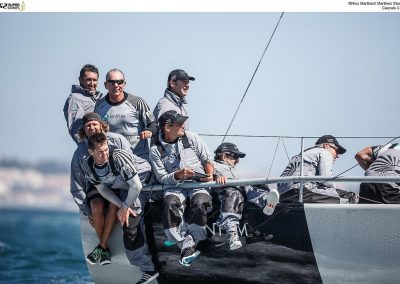 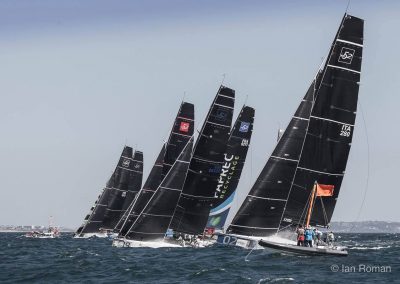 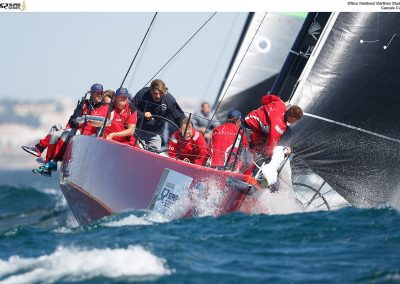 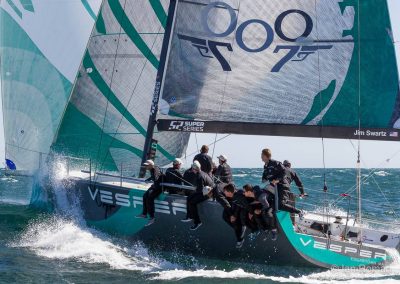 Back
← Perfect Sailing Day For All, Two Perfect Wins For Quantum Racing. Azzurra Are The 52 Super Series 2015 Champions! →