Twice in a row today Quantum Racing stuck to and executed their game plan perfectly. Consequently they won both races today at the Cascais Royal Cup to take the overall regatta lead, three points ahead of Azzurra. The champions elect composed two excellent second places to keep their 2015 title chase on target. Although strong sunshine made a welcome return and added a late season sparkle to the crests of the big Atlantic rollers, the breezes remained uncharacteristically light and so the challenge for the helms and sail trimmers stayed equally acute all the way through Race 3 – a windward leeward – and Race 4 which was a short, upwind downwind Coastal Race out just around Cabo Raso and back. Quantum Racing were on devastating form. Page 1, Line 1 of their Thursday playbook required great starts and the ability to get right early. Ed Baird on the helm delivered nicely off both start lines and so the 2014 overall champions were able to make an early jump on the fleet. Under these testing conditions which require the teams to work in perfect harmony, in sync with the rhythm with the big waves, especially downwind, being in front affords the freedom to sail optimum angles more of the time. As such Quantum Racing could extend steadily and in the coastal race had equipped themselves with a margin of more than 500 metres by the time they crossed the finish line set within a couple of hundred metres of the Marina de Cascais breakwater. Tactician Ado Stead offered an insight into Quantum Racing’s downwind speed in these exacting conditions: “We certainly settle quickly. We settle, we look for the first wave and try to find the rhythm and the rhythm might be different from jibe to jibe. Even after you jibe you just have to settle into that mode, get the boat going, get the crew weight up and just get the thing going, get the apparent wind forward. I think as soon as you have to start watching someone else or sailing to someone else’s mode then that’s when you’re losing VMG. If you sail out in a nice clear lane then you’re in good shape.”

He adds: “We managed to lead from the start we’re really pleased with how it went today, our goal, ‘plan A’ was committee boat end first and early on to port. There was a bit more current relief on the right and it certainly seemed to work.”

Azzurra worked no less diligently, arguably risking a little less. Their strategy is simply to close out the season title and so the team’s main drivers are staying out of trouble, starting simply and relying more on their good boat speed and solid boat handling from a team which has remained largely unchanged over the course of the season. In fact only in Porto Cervo was one team member substituted due to a prior commitment. It is true to say then that the team line up which started in Valencia in May will be exactly the same as finish the season on Sunday. With just six to nine knots of NW’ly breeze still containing holes and small puffs of additional pressure Azzurra sailed the top third of the first beat well in the first race to round second behind Quantum Racing with Provezza third. All three gybe set and with the course relatively one sided then that was the order through the finish line. In the longer race Azzurra made sure of their second place when they outfoxed Vesper on the long downwind back from Cabo Raso, working the inside, inshore lane to get themselves into an attacking position before the wily Vasco Vascotto pressed home a clever move which got them up to second. Vesper, with a 4,3 for today hold third place on the Cascais Royal Cup podium with this morning’s leader Spookie dropping to fourth, ballasted down by two eighth places today. The battle for third overall for the 2015 season intensifies by the day. Bronenosec got themselves back into third after Race 3, but a penalty turn not long after the start line – punished for a port starboard crossing with Xio – annulled what was otherwise a strong opening to Race 4. Sled are in third overall but just three points up on the Russian team.

Live coverage showing all the action from the race course will run through Friday, Saturday and Sunday and is available on the 52 SUPER SERIES Virtual Eye mobile which is available through iTunes and Google Play on line stores. More wind is expected for Friday.

Season standings as at the end Day 2 Cascais

Quotes:
Guille Parada (ARG) skipper-helm Azzurra (ITA): “I think everything is going pretty much according to plan. We said that we wanted to survive the first day and make sure that we get as close as possible to sealing the deal of the season which obviously our main objective, and once we are there; try to be as close as possible to the regatta leadership in order to fight for the regatta. So two second places today i think was wonderful for us and also today we sailed the boat a lot better  so I think it is all positive. Congratulations to Quantum, they had a very good day, they sailed brilliantly, they won both starts and did everything right but fortunately we were always able to keep them tight and we are only away by two points so we are only three away for the overall regatta of Cascais so everything is looking good. The reality is that we are not pushing a lot, we are relying on having all the basics well covered. As I have said before we have the boat which is going fast, the crew is doing a wonderful job with all the maneuvers. We are always going forwards today we gained one position on the final run. Then having clean starts, no fouls and enjoying the boat speed lets Vasco play his game and I think by doing that we are already in good shape. If we need to take risks we will analyse it at the situation but the concept of this regatta is low risk. We are 32 points ahead and divided by 12 points we are 3 races clear so there are still a couple of races before we can say it is done but hopefully we are a big step closer now. I think that with only sixth places we are champions. So it is all good and positive for us but we need to keep concentrating and pushing till the end because we are fighting against a very, very good team.”

Ado Stead (GBR) tactician Quantum Racing (USA): “With a windward-leeward to start with and then a short coastal where we managed to lead from the start we’re really pleased with how it went today, our goal, ‘plan A’ was committee boat end first and early on to port. There was a bit more current relief on the right and it certainly seemed to work. They’re [the currents] a little bit streaky but at times up to 0.7 and other places a bit less but the right was strong for most of the day and it’s a question of how you play the right and how much you took it before the breeze ran out. The boat is going really well and once we are out we are going really well both upwind and definitely downwind we seem to have a pretty good technique because we’re going pretty well downwind. We certainly settle quickly. We settle, we look for the first wave and try to find the rhythm and the rhythm might be different from jibe to jibe. Even after you jibe you just have to settle into that mode, get the boat going, get the crew weight up and just get the thing going, get the apparent wind forward. I think as soon as you have to start watching someone else or sailing to someone else’s mode then that’s when you’re losing VMG. If you sail out in a nice clear lane then you’re in good shape. If you can get yourself clear then you can use the first wave, that gets you that little bit in front which means you can pick your time to jibe, you can pick your time for each wave and get yourself going. We’re all sort of working together, we’re all conscious of what mode we are trying to sail and there’s a very big difference between 13kts and 9kts, we’ve still got the same size of waves but a lot less pressure of how you get on them and how you long stay on them and how much the breeze moves forwards once you’re going so it’s just coordinating all of that and reacting to what you’ve got.”
Preference? Sailing as tactician with Ed Baird steering or as strategist with Terry Hutchinson as tactician? “I like both. I would say with Ed driving and me as tactician we’re hitting the gears now, we’re pleased with how we’re sailing, we’re very consistent but at the same time, sailing with Terry as strategist on the 52 and also on the Bella Mente it’s been pretty good. It’s a good relationship that works very well.” 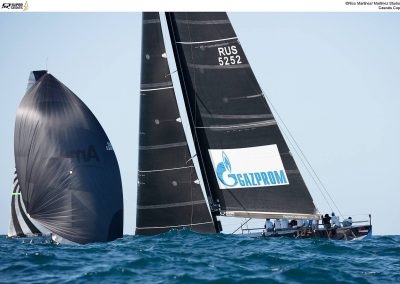 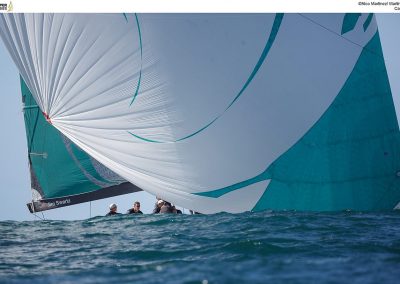 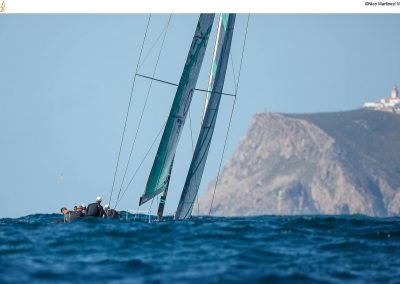 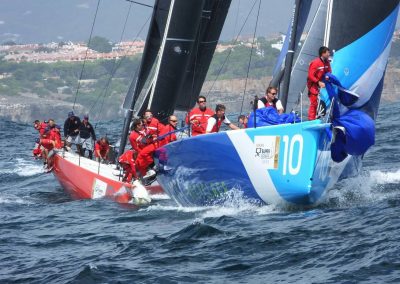 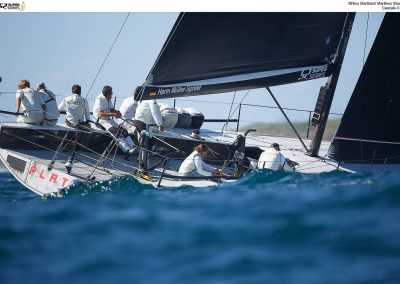 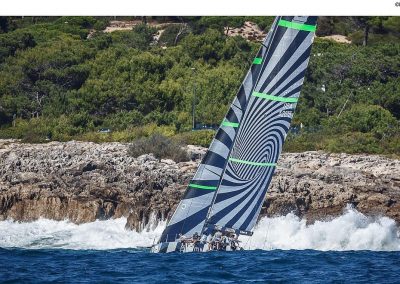 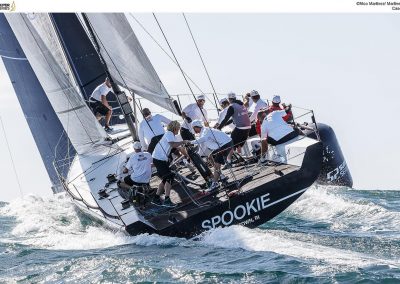 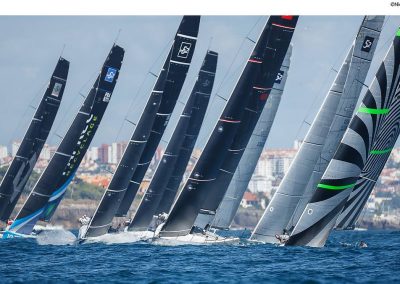 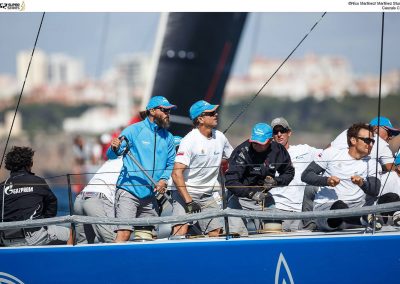 Back
← First-Day-Cascais-Royal-Cup-Sees-USA-Teams-In-The-Lead. Azzurra Hard Act To Follow In The Breeze. →