It is the second time in four years that Azzurra have won on their own home turf, adding to their 2013 triumph at this regatta. They avenge the 2014 World Championship win of Quantum Racing on  these waters, the teams sitting 2-2 now in terms of Sardinian honours on the 52 SUPER SERIES.

Azzurra trailed Quantum Racing by two points when the nine boat TP52 fleet went afloat from the Yacht Club Costa Smeralda early this morning, seeking to outrun the 35 knots forecast for the afternoon. Even at that it proved the breeziest and most exciting race of the season, a 25 knots foam up which saw the Azzurra team keeping tight control, showing off their big winds prowess which has been their passport to success many times.

Even is tactician Vascotto has raced on the this Straits race course many many times over the 25 years he has raced on the Costa Smeralda, he confirmed today was the first time he had raced in the wind direction 135 degrees on the windward-leeward loop off the Bay of Sardinia. And so it was on what he saw and the water, plus the tidal current advantage on the left of the course, that contributed to their winning choice of the left side of the first upwind.

Spurred perhaps by having lost a photo finish to Quantum Racing by two metres on Friday, Azzurra bolted from the pin end of the line with a perfectly timed start to reap the dividends on the left side of the course, to lead around the top mark. With Quantum Racing in fourth the championship was in the balance. A stunning first run from Quantum Racing, owner-driver Doug DeVos sailing an accomplished smooth downwind in the fast, 25-28kts gusty, squally surfing conditions, took the 2014 champions up to second, chasing Azzurra in second, just two boat lengths.
But after making the wrong call up the first beat, unfortunately the champions got it wrong again on the second. A left shift brought Platoon, Alegre and Gladiator back into the top group. While Azzurra raced away to hold Gladiator off across the finish line, Quantum Racing could only make sixth, leaving the blue hulled home team as champions by three points.

Adding something of a hollow, but moral extra win, Azzurra were ahead in Race 8 when it had to be called off when the wind almost went off the scale, gusting up to close to 40kts at times. Vascotto, holding an ice cold Sardinian beer, smiled:
“In fact I have never sailed with that true wind direction on that area before. It is new for me and I have sailed here for 25 years. My first regatta here was in 1991. We tried to understand what was best here very quickly. We chose the left because there was half a knot pushing with us in that corner against half a knot of current the other way in the other corner. There was more split breeze, more left on the beginning of the left. It worked and we are happy. It is a fantastic result for the club but I am especially happy for the Roemmers family who put so much effort into this class. And to skipper Guillermo Parada, he had a hard time and worked very hard after Valencia and we are rewarded.”

Azzurra’s winning scoreline included three victories on the windward-leeward courses, pipping the 2014 series and world champions Quantum Racing by four points in the regatta standings. Russian flagged team Bronenosec won both coastal races and one windward leeward but bookended an otherwise impressive set of scores with ninth places in the first and last races. They take third on countback ahead of Ergin Imre’s quietly consistent Provezza team.

Second for Doug DeVos, who had not steered his TP52 for 18 months, since winning Key West in 2014, is an excellent result. He will be back to helm at the Copa del Rey but Ed Baird will steer for the TP52 World Championships Puerto Portals, Mallorca next month when Valencia champions Rán Racing return to the fleet.

Terry Hutchinson (USA) Quantum Racing’s tactician this week, concluded:
“I actually think we sailed the boat pretty well. When you consider that Doug has not raced a boat in 18 months and we were two points up going in to today, it was always going to be a challenging day. In retrospect this is a great result considering the time that Doug has steering the boat. He did such nice work. He is so intense and focused on steering the boat and he allows me to stay on him and we have a great relationship like that. And then you look through our team, seeing how good the team is from front to stern. It is an awesome week of sailing. It is hard to complain.”

Quotes
Terry Hutchinson (USA) tactician Quantum Racing (USA): “ We have some development to take place in mainsail world that I know they have been working on, there are developments to take place in jib world. I will not be on the boat at the TP25 World Championships, Ed Baird will steer and Ado Stead will do tactics. I will sail at the Copa del Rey when Doug steers. How we finished here exceeded our expectations. I’d have said finishing on the podium then we would have sailed well, and I base that on my time investment sailing the boat, and Doug’s time sailing the boat. We are so fortunate having Warwick Fleury and Brett Jones, Lorenzo Maas and Greg Gendell and so forth and so forth, they make up for a lot of our average mistakes shared between Doug and I. But, there you are, you get a little bit of a taste of the honey…..and you want more and more. It is a dangerous thing. The Azzurra guys sailed well. We jagged a win yesterday but if you think about it in terms of swings and roundabouts…well the fifth we turned into a first did not deserve to be and a first, but I don’t really think we deserved sixth today. I am impressed with the evolution that has gone into the sail programme. I know they were just feeling a little behind the eight ball with the boat being late and so on. But there are a couple of things in the configuration that show a lot of promise. But they take a bit of time to evolve. We have been fortunate to have Ed Baird in the coach boat, taking everything in. That just shows us the strength of the team. I am making a conscious effort to not do as much sailing, and to do the best job I can with my kids and to be at home. You just know that if you can’t be at 100 per cent, and there is someone like Warwick trimming the mainsail, then you have to be at 100 per cent. You can apply the same logic through the team and so if I can only be 80 per cent. It is not fair on the team. So I will go home, I will do some Wednesday night racing. I will probably mow the lawn. It is my daughter’s birthday Sunday when she turns 14 and I will be home for that. “

Michele Ivaldi (ITA) tactician Bronenosec (RUS): “Our most optimistic ambition for this regatta was third, so we are really, really happy. Unfortunately we started bad and finished bad. In the middle we did some great racing. We did some good coastal races and showed the fleet what we can do. We just need to keep improving. We still have some things we can do to clean up. We have all the right tools and all the right people to better. Our goal is to keep chipping away, keep improving. Our package  is good, the rig, sail and boat is fast. Our speed is really good. Upwind in 12 kts we are within the top three – I would put Azzurra and Quantum as the best overall in this fleet. For sure they are the team to be copied.
We did no start so well but had great days in the middle, we won three races, two coastals and then we made a few mistakes on the final day which leaves us with a bit of a sour taste in the mouth, but overall third, for a new team, is very, very good.

Vasco Vascotto (ITA), tactician Azzurra (ITA): “It is a tough regatta, the new boats are so competitive. To win in the breeze is a great feeling too. I said yesterday I hoped we would sail like we did yesterday and that is exactly what we did. I think we deserved to win this event. It is also true that realised we can do a good job. We have good preparation. The boat is fast. The shore team did an amazing job to prepare the boat and that makes it easier for me as the tactician to do a good job.
In fact I have never sailed with that true wind direction on that are before. It is new for me and I have sailed here for 25 years. My first regatta here was in 1991. We tried to understand what was best here very quickly. We chose the left because there was half a knot pushing with us in that corner against half a knot of current the other way in the other corner. There was more split breeze, more left on the beginning of the left. It worked and we are happy. It is a fantastic result for the club but I am especially happy for the Roemmers family who put so much effort into this class. And to Guillermo Parada, he had a hard time and worked very hard after Valencia and we are rewarded.

Guillermo Parada (ARG) skipper-helm Azzurra (ITA): “We worked very hard to make this happen this week. We knew how important it is as an event. We really wanted to win and for one reason or another we were not making it happen. So today we left the dock and decided to give it our all. Ansd we knew the conditions would be tough and we would have only one chance. So we need to make sure we made the best of it. We made it happen and it feels nice to win here for the second time and give the Yacht Club, the boat, the team a victory in home waters. We are very, very happy winning the regatta and now leading the 52 SUPER SERIES circuit in front of the yacht club in front of our families. It is very special.
I think we really wanted it. Yesterday when the breeze came on we were on it and leading the race but we missed the win by a couple of metres. I think Quantum Racing grabbed that opportunity. Today we won the pin went left and then managed to control the boat in the hard conditions. We were leading in the second race too. It was good to cancel it as there was a lot of risk coming in, but for us it to be leading it too proved we were in control. Our strengths are that we are a very, very tight group with different culture to everyone else. And so when it all kicks in we are tough. That same thing is our weakness. We are Latinos and so we get overexcited, we overdo things a little bit. But that is the way we are. We need to exploit our strengths as much as we can and we try to keep our weaknesses under control. We are feeling very, very good this year. We have a very, very good boat. It is not a coincidence that it is King Marine boats which lead the circuit in the top two places. And one of our strengths is we know how to celebrate as a team!  “ 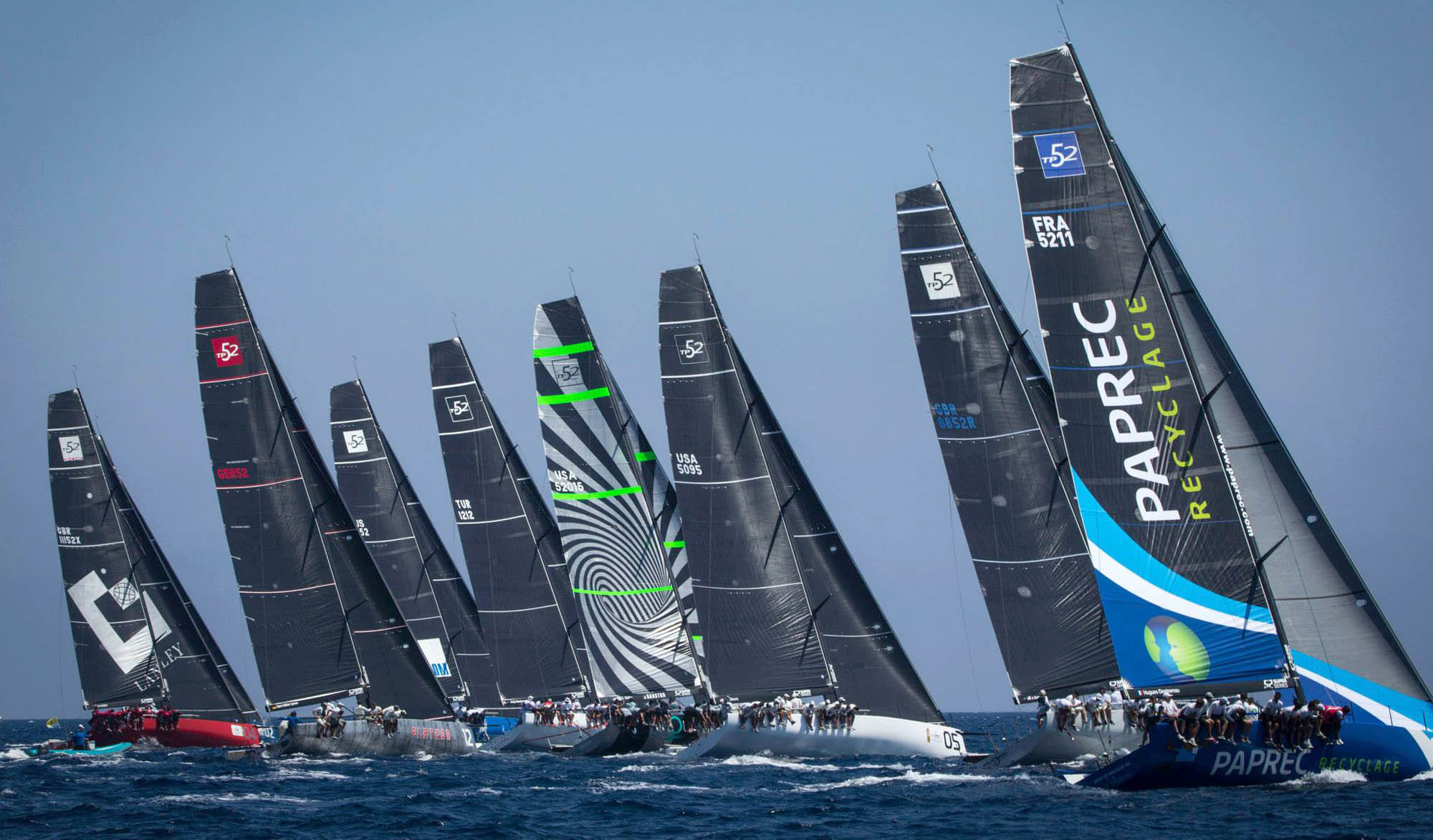 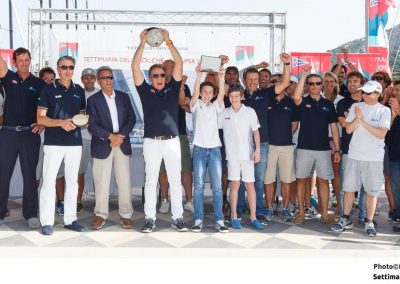 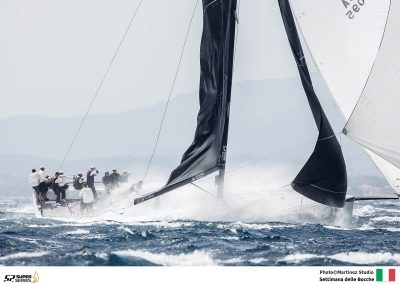 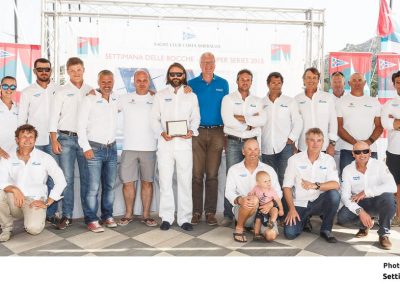 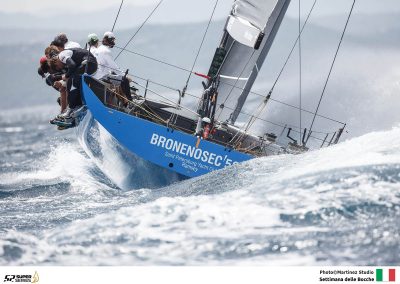 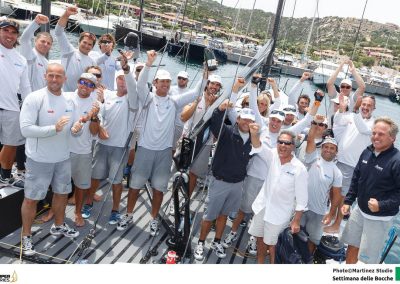 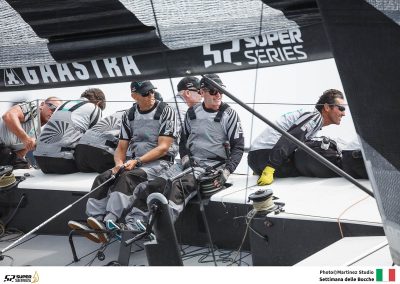 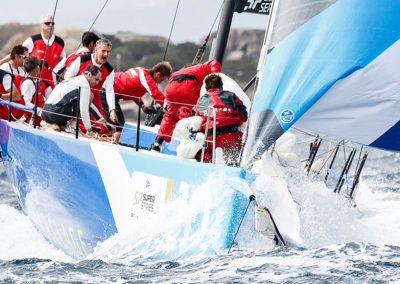 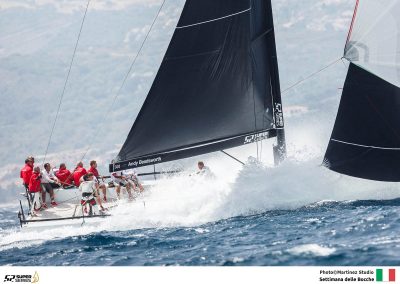 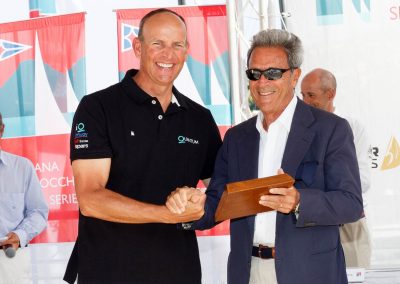 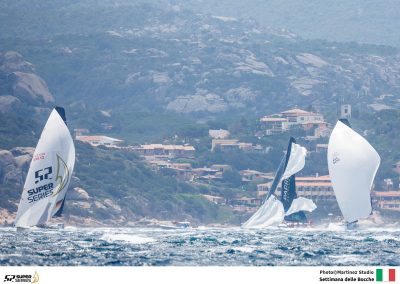 Back
← One Fast And Furious Race Sees Quantum Up Front. Coming up: the TP52 World Championship. →