After a slow start on Monday and Tuesday, when light wind conditions postponed racing until late afternoon, officials cancelled racing altogether on Wednesday but then amped up again on Thursday with a lively running of the event’s traditional Around the Island Race. Light air was the soup of the day again today, but none of the more than 1,000 sailors here seemed to mind—they just wanted one final chance to make some power plays and enjoy their last moments on tiny Block Island at one of the country’s most beloved and classic of sailing competitions.

Jim Swartz’s (Park City, Utah) IRC 52 Vesper won IRC 1 class on the merit of five victories in six races and the 2011 IRC East Coast Championship by having the fastest average corrected speed from among all IRC-rated boats competing. The team’s only performance flaw seemed to come in yesterday’s Around the Island Race when it fouled a boat from another class at the start, did its penalty turn, and slugged to fifth.

In the meantime, Austin and Gwen Fragomen’s (Newport, R.I.) JV 52 Interlodge won the race to move into third overall and today made a heroic bid at dethroning Vesper but only managed to move itself to second overall with finish positions of 2-4 while Vesper won both races.

“In our class we had all 52 footers, so the competition was side-by-side a lot,” said America’s Cup veteran Gavin Brady(Annapolis, Md.), who stepped in today to drive when Swartz had to leave the island early. “Today, we won the start of the first race, so that was pretty easy, and we won the race by two to three minutes. The second race was closer, and it was only on the third leg that we took the lead. We all finished within one and a half minutes of each other, so after an hour of sailing, that’s pretty close.”

Brady added that Swartz is especially pleased with becoming the 2011 IRC East Coast Champion. “He has spent a lot of time on this 52 program, and it fits well with us right now…the team…the chemistry…all stars are in line at the moment.”

Peter Cunningham’s (George Town, Grand Cayman, CAY) PowerPlay, fell from second to third after today’s action, equal on points with Interlodge but losing to a tiebreaker. Interlodge was awarded a Rolex Oyster Perpetual Submariner timepiece for its top IRC performance in the Around the Island Race while Vesper received the IRC East Coast Championship Clarion Partners Trophy. 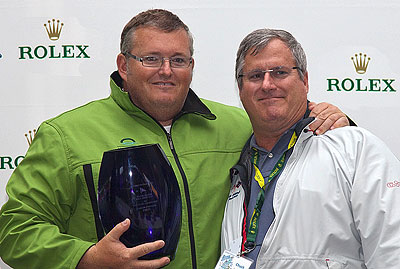 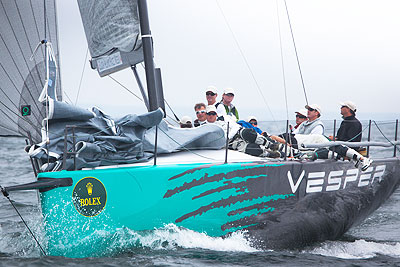 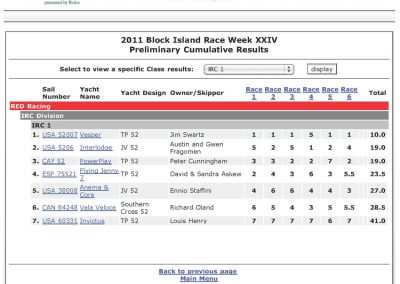 Back
← And The Winner Is TP52 Win Gotlant Runt →