“It was great, good waves and different open race course, nice to get a shifty race course. We took a few boats on the first run of the first race, and Ross did some nice work on the second beat and in the second race we managed to come away with a third, so we are pleased with that. It was shifty and pretty puffy, and so it was really nice racing, and the forecast is for even more tomorrow and so it might even be a bit like Marseille. One of the things today was there was opportunities on both sides of the race course, and then the nice thing is when you do get a bit of an opportunity to mix it up, it works. It was really good for us. We are slowly getting more and more out of this boat, but we are certainly not as quick as the newer boats. In that breeze our speed is OK, but not as good as the newer boats.” said Dean Barker (NZL), Bribon’s helm.

Terry Hutchinson (USA), Skipper-Helmsman of Quantum Racing (USA): “ It was a disappointing first race, we had a great work up the first beat and rounded the top mark in the lead, we set our spinnaker and then the spinnaker sheet got wrapped around the coaming in the back of the boat, and started sawing through the back of the boat – a little bit of a worry! Our eight or nine boat length lead went down to zero and from there we were passed by all, but again the guys did some great work on the last run and we got back into fifth. In the second race we got the end of the line we wanted but I didn’t do such a good last wrap-up, but if today is anything to go by it is going to be full-on this week, and some awesome racing expected. It’s a good feeling to get started again. The race committee did some great work out there holding the marks, because these conditions are pretty tough on everybody.”

Ignati Triay (ESP), jib trimmer on Bribon: “Nobody is used to these kinds of conditions, you get the feeling you are in the middle of the sea, rather than in a bay or gulf, or some kind of protected area like in Marseille, Cagliari or Palma. The shape of the coastline, coupled with a north-easterly wind on a race course set quite far from the shore means that you have a more open-water effect, and with big seas. The wind does its own thing which leaves tactics wide open. What most impressed me today was coming back from a 12th on the first beat to a 3rd on the following run, after choosing the right downwind along with ONO and CXG which put the three of us in the lead at the gate. There are a lot more options than in a normal bay and that makes the competition fantastic.”

Guillermo Parada (ARG) skipper of Matador (ARG): “It was a good Start to the week since we didn’t sail brilliantly and made quite a lot of mistakes, and even then got some decent results. It has been a while since we sailed with this kind of wind and there were a few errors, as well as my starts not being too good either. I am going to have to read the manuals again, but if we can get it all straightened we will be feeling confident.” “ The boat is going well and we still have quite a few new sails both for here and Portimao. We have run our programme well so we still have some good material to use. The race course is tough, and the depth and shifts makes it very hard for the committee to lay the marks, something we have to keep an eye on especially at the start, as they move around quite a lot!”

Steve Hayles (GBR), Navigator of Matador: “It was very tricky out there, big wind and waves and although the breeze was up it was very shifty. Normally when the wind is up it doesn’t move around so much but with the two winds, and big mountains inland it makes it very hard to fathom out. We felt quite confused at times but we have come away with a couple of good results so as an opener that’s not bad!”
If conditions stay like this it certainly is going to make very interesting racing upwind and downwind with lots of place changes. Often in these races things don’t usually alter after the first beat but there was a lot going on out there today; a huge amount at stake which obviously makes it very interesting. When you are in the lead it is hard to maintain and behind there are always good opportunities to get by- an interesting week ahead of us for sure!”
“ Thierry Peponnet and I are a new partnership, I haven’t worked with him before but I’m really enjoying it. Of course every one works in a different way and that takes some time to fit in individually. It is an on-going battle to keep in the top three and look at results overall and not just this regatta.” 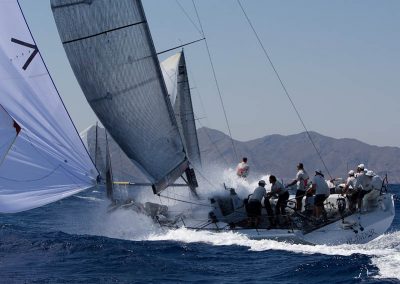 Back
← In the mean time, Down Under Tough day for most, good one for some →