Tough day for most, good one for some

In brisk winds and moderate seas off Cartagena the day’s biggest misfortune visited Platoon powered by Team Germany when a forestay fitting failed and they had to retire immediately.

Bribón got  involved in an incident with Artemis (SWE). While Bribón sailed clear and did a penalty turn subsequently the two crews went in to the protest room with Bribón winning and Artemis suffering disqualification from race 4.

Quantum Racing struggled a bit. Last off the start line they worked hard to get back to third at the top of the second beat, but they lost five places down a thrilling final run to score a weighty eighth.  “I sailed like a lemon.” said a visibly frustrated Terry Hutchinson (USA), “That’s all there is to it.”

At the top of the Region of Murcia Trophy regatta standings it is now Bribón who lead Mutua Madrilena with both on 15 points, with El Desafio third two points behind them on 17 and Quantum Racing fourth on 18pts.

“ We had a plan of what we wanted to do, we toughed it out and our side came through and we sailed a clean race. Today it was nice for us to make it stick. There have been times in the past where we have been in the lead in the past and worked our way back into the pack. Today was nice and everyone did a nice job. We are a bit more relaxed. We have been working very hard on some downwind techniques to get a bit more speed. Just learning a bit more each time. It has taken a bit of while to get one on the board, but it is important to feel that we can win. Paul has had some more time on the boat and things are going well.” said John Cutler. “We are really liking it here. The conditions are interesting, challenging and different and it is a nice City.”

“It was interesting today because the breeze was shifting and you really needed to stay in phase with it, and if you were allowed to do that you did well. There was a very definite pattern to it and staying in phase was the name of the game.” said Nacho Postigo (ESP) Mutua Madrilena’s navigator. “ In general we have been going well since Cagliari but just needed to cut out the stupidmistakes, and I think we did that today.”

Paul Cayard, Skipper/Helmsman of El Desafio
“ We had a decent start and John had a good game plan. He wanted the right in both races and we managed to get over there, and we did a good job of cashing in when it was time or being patient when we had to wait for a shift. Nacho did a great job trimming the main because there were very difficult conditions out there especially on port tack, it was very rough and hard to keep the speed. When it is that rough you have to find the right trim where the boat has the best balance and the guys kept the boat balanced very well both up and downwind, and we didn’t lose our composure.”

Jochen Schuemann, Skipper/Helmsman of Platoon powered by Team Germany:
“I think the superstition came true again, after winning the practice race as today we won the first regatta, and had a good start to the last one, but after just a quarter of the first beat we broke the head stay and had to retire. A little luck with no third race means we only lose one and I think we can make repairs rapidly to be back in it again tomorrow. We are obviously keen to get good results here, it is very bad luck to break a piece which is hard to check – it either hold or it breaks, but these pieces should be solid enough on an offshore boat.” 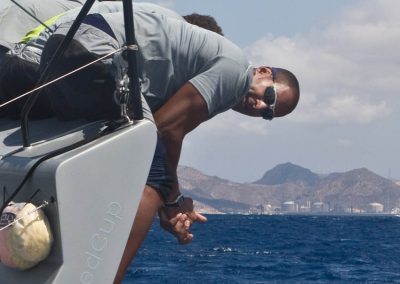