Action, excitement, thrills, spills and tension right to the finish line, Mutua Madrileña’s two solid scored sees them top the leader board at the Region of Murcia Trophy regatta.

From what was undoubtedly one of the most challenging and exciting coastal races of the last couple of years on the MedCup Circuit it was the consistency of Vasco Vascotto and crew of Mutua Madrileña today which sees them top the overall leader board of the Region of Murcia Trophy Regatta.

Historic Cartagena has seen many, many important sea battles over the years, with the rich local mineral resources nearby and strategic importance of the city at stake, but today’s coastal race produced an epic finale over the final two miles, in shifty, puffy breezes when a three way battle to the line was won by Alberto Roemmers (ARG) Matador, holding off Jochen Schuemann (GER) and the crew of Platoon powered by Team Germany, who in turn had their hands successfully containing Mutua Madrileña to take third.

“Ask me if I’d rather win a regatta or gain places up the overall standings and I’d want both, always, but we always were targeting winning the Circuit from the beginning, but we lost too many points in Marseille, but today was good for us. We were patient again and the crew did a good job on every leg, working hard. And I think we were always right with our sail selections and that made a big difference.” said Vascotto.

Ross MacDonald (CAN), tactician on Bribón (ESP).
“ It looked like a bit of a disaster at the leeward mark there, we are not 100% sure what happened. The spinnaker was on the lock, and we think the lock was working but that the jammer broke, the clutch just stuck, so we had to send Roman up the mast to spike it off and then recover the halyard next time up.
It was a bit of a fire drill. With the big wind shift on the long reaching leg to the south we caught up a bit and then on the second leg we took places.
In fairness today that was not the plan to go out and beat Artemis, we just wanted to have a good day because points count double and we wanted to be always in the top group. That was the plan.. It was an interesting race on a difficult track and that makes it fun, enjoyable and a little different to some of the other venues where one side pays all the time, which is fun too.
I think we are just trying to do the best we can and keep getting a little more out of this boat. There is no real agenda other than keep trying to get better each day.”

Morgan Larson (USA) tactician on Quantum Racing:
“ It was challenging. The left breeze was 35-50 degrees and the right breeze 65-90 degrees and there was not much breeze in the middle, and so one side was going to pay or the other and once you were committed to one side it was hard to cross to the other. The course was a challenging one and then with the reaching leg, the wind shifted so much on the leg, you needed so many sails. Round the weather mark we saw a 40 degrees wind and at the reaching mark it was a 90 degrees mark.”
“ On their second run we thought we would sail back in with some pressure but we didn’t. “
“ But, hats off to the Germans. They sailed the best race, being ahead and getting passed, then fouling us and having to do a 720 and then they got behind, got back and blew a spinnaker up, and got back again for second. Great, brilliant, they sailed the best race on the day.”
“ I am happy. We have had a couple of challenging days but we have no particular agenda, we just have to de-brief and see what we are doing wrong and put it right. It is by no means over.”

Jochen Schuemann (GER) skipper-helmsman of Platoon powered by Team Germany:
“ You needed a good start and some good upwind sailing, but the two difficult reaching legs were key today. It was all about the right sail choice and good crew handling on those legs which were very tight and extremely difficult. There were a lot of differences in sail choices and a number of boats made mistakes so that just helped our comeback.”
“ After yesterday we are quite happy finishing second as that is obviously a double score for the coastal race. We had a little problem with Quantum and had to do a penalty turn so were at the back for a while but on the reaching legs managed to come back with good crew work and boat speed, and had a good fight at the end with Mutua Madrileña and Matador.

Steve Hayles (GBR), Navigator of Matador (ARG):
“The finish inside the harbour certainly made it interesting, the whole race really with huge shifts, and lots of interesting stuff going on! It’s nice to come out with a good result, its been a bit of a weakness of ours in these coastal races up to now! We put a lot of effort into preparation. You do the windward-leewards every day, and just one coastal race per regatta. There are more sails, and a lot more factors. It’s not something you practice much and we set some time aside and sat down and put together a plan, it was a tough day to put it into practice but it turned out well!
It is tough when there are three boats like we had at the end, two boats behind us and their splits, and wind shifting though 40º whilst all of us were obviously watching each other. When it’s a three way battle like that its more complex still!” 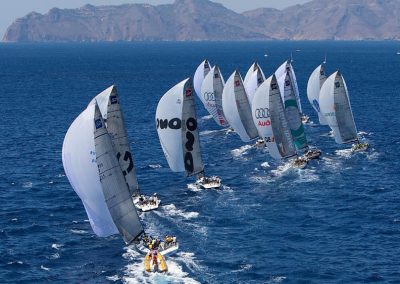 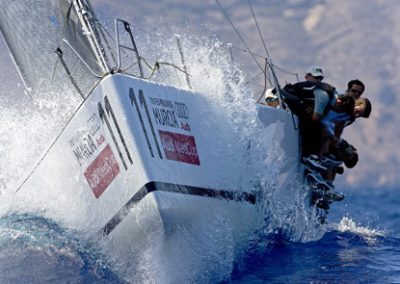 Back
← Tough day for most, good one for some A shifty place to sail, exiting but tough →