Practise days are over and it is time to resume racing on the 2009 Audi MedCup Circuit for the TP52 Series today.

Winds are forecast to be S to SE’ly up to 10 knots, perhaps with a little more depending on the thermal help.

Riccardo Simoneschi’s team on Audi Q8 deciphered the difficult, changeable breeze on the Rade sud best to win the Marseille Trophy’s practice race today for the 11 TP52 Series crews, but the lesson learned by all is that fortune will favour the brave on a race area which today offered many different patterns to the winds which are affected heavily by the majestic surrounding geography.

Racing in the moderate S to SE’ly breeze, with the high, rocky mountainous promontory of the Point Rouge inshore to the left, and the Isles Frioul to the right of the course arena, the breeze was often uneven across the race track. Upwind there was often the choice of staying inshore where the breeze was puffier and the gusts offered a beneficial angle, or offshore where there was a more settled wind.

The winning gun today is a confidence boost for owner-driver Simoneschi’s mainly Italian team who struggled at times in Alicante. They proved today that they can build from a good start and first beat to work up a big, comfortable lead.

Tactician Charlie McKee (USA) – double Olympic medallist – called a gybe-set at the windward mark to earn the lead on the first run, but Audi Q8’s biggest gain was in the shifty gusts at the top of the second beat where they jumped to 1 minute and 42 seconds ahead of the jousting Emirates Team New Zealand (NZL) and Circuit leaders Matador (ARG).

Downwind, when the breeze peaked at 16-17 knots there were sparkling moments of fast marginal planing speeds, just a brief reminder of last year’s great conditions here.

Emirates Team New Zealand were able to hold off the Alicante Trophy winners Matador to take second across the finish line, over one and a half minutes behind Audi Sailing Team powered by Q8. 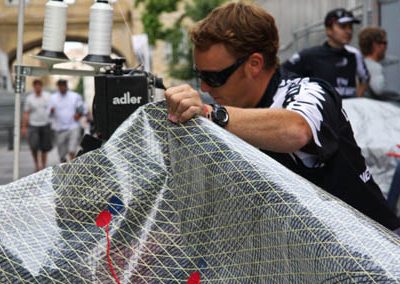 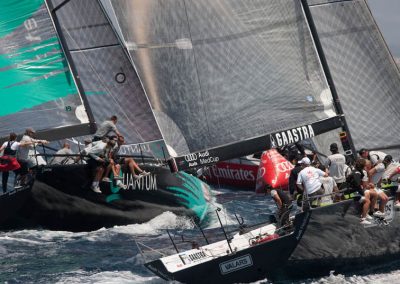 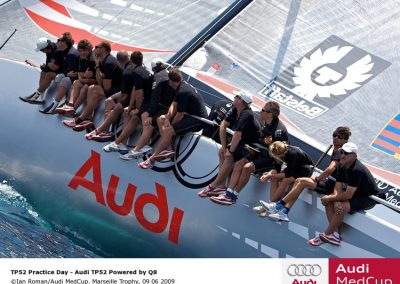