In breezes which built from 10 knots for Race 1 to a sparkling 16-18 knots for the third heat, it was a day marked by tit-for-tat racing between the two rivals with the current 52 SUPER SERIES champions laying down the early marker by winning Race 1 comfortably.

Quantum Racing countered by winning the second race with Azzurra third to leave the top duo on equal points going into Race 3. The team which races under the flag of the Yacht Club Costa Smeralda then executed another great pin end start, a near facsimile of their Race 1 opening, and were well clear of second placed Quantum Racing by the finish line.

The differences between the leading two boats were small across the day. Quantum Racing’s strategy in Race 1 did not work as planned and they rounded each mark in sixth but staged a valuable recovery on the final run, using the building breeze to good effect, to just steal a useful third on final approach to the finish line. After that they looked increasingly strong.

Ed Baird, skipper-helm of Quantum Racing recalled:“ We made an assumption about the first race and stuck to our plan but the plan didn’t quite work out but we were fortunate at the end of that race that the breeze came up from behind and we were able to get into some good situations and we were able to get third. We rounded sixth in most of the mark roundings so we were lucky there.”

Well executed starts at the pin end of the start line twice were the foundations for Azzurra to build on. The number of sails allowed over the season is limited. With their programme foregoing new sails in the USA in order to bring on line a new inventory for the European season Azzurra were notably quick in key situations:

“ The reality is that we didn’t use new sails for Miami. We suffered a little for that. We decided to keep all our new buttons (each counted sail has a registered button) for European season.  So we have an all new fresh inventory here. We are going  a little quicker and so can hang in there when we get in some tough positions.” Guillermo Parada, Azzurra’s skipper explained.

For Quantum Racing Terry Hutchinson and Jordi Calafat combined neatly on the first run of the final race, more readily identifying a big change in the late afternoon breeze which allowed them to pass Rán Racing and Interlodge to gain that second place.

Niklas Zennstrom’s world champions Rán Racing finish the first day of racing in third place overall counting a 2,4,3, a consistent scoreline given that conditions may have looked good but there was always something happening to challenge the tacticians.

Adrian Stead, Rán Racing’s tactician confirmed that he felt they could have been one or two points better for the day and that now need to be going out punching tomorrow to win races.

Good starts and first windward legs were vital. Austin Fragomen’s Interlodge – with John Cutler calling tactics – held on to second all the way around Race 2 and in Race 3 Ergin Imre’s team on Provezza scored a good fourth place which keeps them in touch with Interlodge which lie fourth overall.

Quotes
Ed Baird (USA) skipper-helm Quantum Racing (USA):  “It was a pretty interesting day there was a lot going on, especially towards the end of the day with some major windshifts but we made it through with a pretty reasonable scoreline.”

“ The new guys are all great but that’s part of the mission is to figure out the communication between each other and make sure we are doing the right things that each other are expecting of what has to happen around the race course, and understanding that language. It’s all English but everybody says it a bit differently!”

“ Azzurra had a good day but we are very happy to be in the hunt and looking for our opportunities.”

Guillermo Parada (ARG) skipper-helm Azzurra (ITA): “ It’s a good start if you look at the scoreboard its shows that the fleet is still pretty much together still. Its good to start on the right foot, we had two very good races, two clean ones but in the other one we were in the middle of the fleet but we hung in there and we were able to recover one position in the last run which was very good. I think that was the most important part of the day. It is a lot easier when you are in front but when you are not so good you have to be tough.”

“ It is a difficult venue because many times you are looking at the right but the starts were a little bit on the left and so in order to get that advantage to get the bias of the line you need to make it perfect, to take all the bias that you can and then hope that when the right comes you have enough of a lead to hang on to the lead. We were lucky that there was not a big fight for the pin and Tomislav did a very good job on the starts, getting the starts that Vasco was after.” 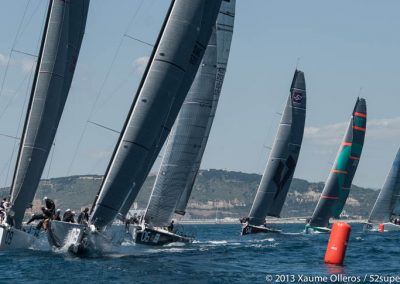 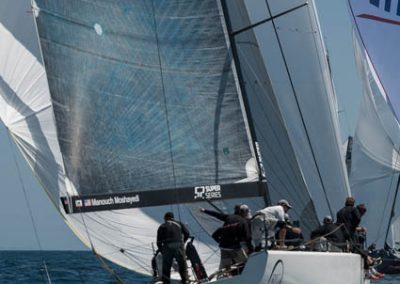 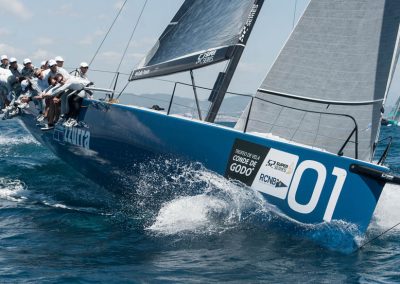 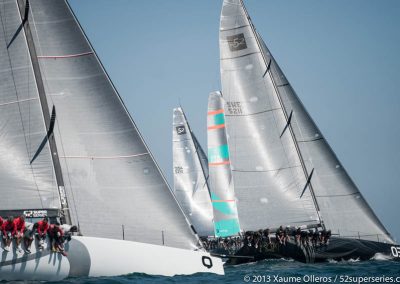 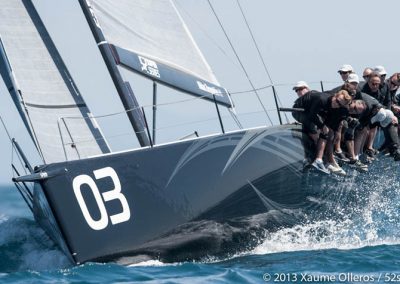