The internationally crewed Team Beau Geste from the Royal Hong Kong Yacht Club mounted a stunning defence of their first round result in the TP52 Southern Cross Cup, wrapping up stage two this afternoon on Melbourne’s Port Phillip by a whopping 15 points.

In a repeat of the stage one finishing order, second on the ladder to Team Beau Geste’s final score of 11 points was Marcus Blackmore’s Hooligan on 26 points. Coming in third, in the eight-race round, was Jason Van Der Slot’s Calm 2 on 29 points.

The partnership of successful Chinese businessman Karl Kwok and his trusty helmsman Gavin Brady, who grew up in New Zealand the son of a commercial fisherman and went on to sailing greatness, has been a match made in heaven for close to two decades.

On their final result Kwok said, “The competition was very keen and the standard of racing very high. Mother Nature threw in some variety, particularly yesterday…. it was like a Hobart race just two miles off the beach, I’ve never seen anything like it.

“The fact this is an owner driven association makes it most friendly. The race management and the facilities were world class; Sandringham Yacht Club is probably the best looking club I’ve ever been to,” Kwok praised.

Eleven different boats called Beau Geste, soon to be 12 with an 80-foot existing maxi being revamped by Kwok, have delivered the Hong Kong skipper and his classy crew countless line honours and handicap victories around the world. The latest came today in the innovative four-stage circuit devised by a passionate bunch of Australian owners.

In WSW winds, which started out at 16 knots moderating to 10 knots by the final race, plus a nasty chop at times, Team Beau Geste used the final four races to put daylight between them and second on the IRC overall pointscore.

Marcus Blackmore’s TP52 Hooligan, helmed for two of the three day regatta by one of the country’s best known maxi yacht skippers, Mark Richards, encountered a major problem in race six when their mainsail developed a half-metre tear, rendering them a DNF.

“We had three sail makers and a good sail repair kit on board,” Hooligan’s tactician Stu Bannatyne said. “The boys did a great job of fixing the sail and that got us back in the next couple of races.”

Bannatyne paid tribute to his Kiwi countrymen on the winning boat, “Beau Geste sailed a safe, smart regatta and didn’t make mistakes when others did, including us. They showed that consistent, conservative sailing wins regattas, sometimes by a big margin.

“All in all there were a lot of positives for us to take away. The potential is there, we are only half way through the series,” Bannatyne reminded.

Conditions varied wildly over the three-day, eight boat class wrangle. Friday saw an average 10 knot WNW breeze while in contrast a forecast northerly hit the track on Saturday with a vengeance. Gusts up to 36 knots were recorded by SYC’s tower before the wind settled down to 22-24 knots for that day’s one and only start on a cranky white-capped Port Phillip. The breeze then steadily climbed over the owners’ agreed upper limit of 24 knots and the fleet was given an early mark by Principal Race Officer Denis Thompson.

Event organisers New Tack are excited to be taking the remaining two rounds of the inaugural Australian TP52 series to Sydney later in the year. The venue and dates are yet to be announced.

While Rob Date’s RP52 Scarlet Runner is leaving the series to go ocean racing, the association is hoping more Australian and New Zealand TP52 owners will join their classmates for the second half of what is arguably of the best grand prix series currently on offer on the Australian east coast. 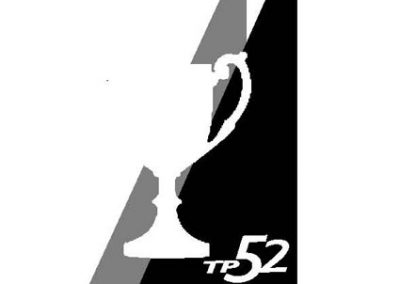 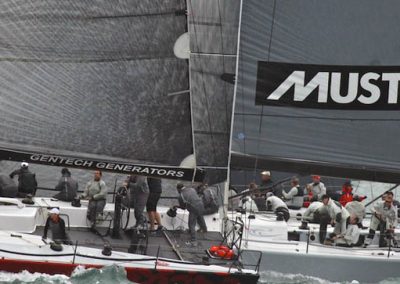 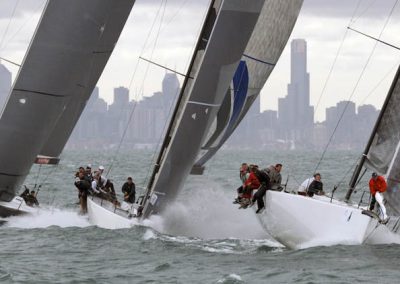 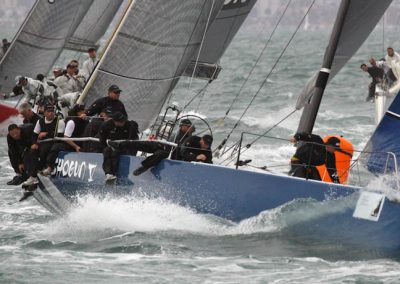 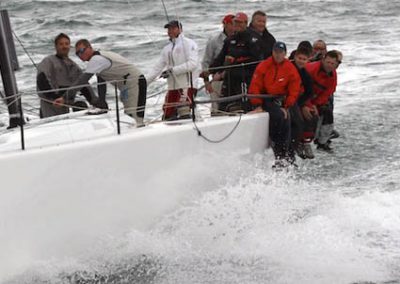