Mutua shows the way at Day 2

It was another tricky day on the Lanzarotean waters for the 14 crews taking part in the TP52 World Championship – Islas Canarias Puerto Calero. The race committee had to move the starting line a mile further offshore, trying to get a better breeze but had to fire the gun with no more than 7 knots of a northeasterly. There was no shortage of challenges for the tacticians today, albeit less than yesterday, but for Mutua Madrileña it was another day in the office. Vasco Vascotto’s team with 3 victories in 5 races is now leading the championship, 7 points clear of second placed Quantum Racing. Artemis is still third overall but their performance today was far from what one would have expected, scoring an 11 th and a 13 th.

The day’s first race was a one way victory for Vasco Vascotto’s Mutua Madrileña that sailed as close to perfection as possible. Favini, in concert with Bruni on tactics and Vascotto, took control of the situation with a clean start at the pin end and from there on stayed on top of the fleet until they crossed the finish line. Together with Bribón and Synergy they opted for the left side of the course and stuck to it. Dean Barker on the helm of Bribón was constantly putting pressure on the Italians but was unable to make them relinquish leadership.

The other story of the race was the great recovery by Platoon, despite the penalty for being early over the starting line. Jochen Schuemann’s boat made the right tactic calls and got the shifts right and by the leeward gate they had already stolen third place from Synergy. Quantum as well recovered in the second beat but the race’s real surprise was Artemis. Not only were they early over the line, they were unable to close the gap and finished 11 th.

The second race, fifth of the event, was another victory for Mutua Madrileña, but definitely harder than the first one. Flavio Favini got another perfect start, opting again for the left side, but the race didn’t turn out to be as easy, given the Italians constantly had to fight with Platoon for leadership. In fact the top spot switched between the two a couple of times but the Germans were finally third after Desafío sailed a much better race, especially in the last leg. John Cutler on the Spanish America’s Cup challenger’s boat made better calls after a mediocre first race.  Third place was again for the German Platoon whose crew was evidently better than yesterday.

Francesco Bruni, tactician on Mutua Madrileña:
We are very happy, very satisfied with our performance today. Everything worked perfectly aboard Mutua Madrileña, boat speed, tactics, and crew work. It is obviously a great start for this championship and an eventual victory will close a great 2008 campaign. Nevertheless, it is still too early to open the champaign bottle; this is going to be a tough event and we have to remain concentrated. Although it was shifty today, the breeze was more stable than yesterday and the left side of the course was even more favourable, almost throughout the day. In addition, our starts turned out perfectly and we were able to position ourselves exactly where we wanted and get the side we wanted.

Jochen Schuemann, helmsman of Platoon:
Today we were luckier, we survived a premature start and we had to recross together with Russell, otherwise we would have been in the leading group. The boat is performing well even if it’s not a new boat. Nevertheless, it was undoubtedly a good day after yesterday’s poor performance when we dropped from 4 th to 12 th in the last race. It hurts to lose 10 points. Today we showed we are fast and good enough to be among the leaders and I hope we get at least a medal in this Championship.

Dean Barker, helmsman of Bribón:
We had quite a difficult start but we still managed to sail well both in the first and the second race. We are satisfied because things didn’t go so well yesterday. Today we did much better, we had the ideal conditions to start the way we wanted to and stay clear from the rest of the fleet. Still, wind conditions are very tough and complicated.

Russell Coutts, tactician of Artemis:
Today we had a light and complicated breeze, we were early over the line and had to go back and if you stay back in this fleet it’s really tough to climb back, it’s a real battle. Under these wind conditions you don’t try to win, you try to avoid losing and you have to be quite conservative. We had a couple of opportunities to separate from the fleet but some stupid errors made us slip back. You can say we didn’t have our best day, let’s hope tomorrow we sail better.

John Cuttler, tactician of Desafío:
Conditions were really tough today but the race committee moved the course slightly east and that made things a little bit better. The first race was very tough, in the start we were pushed back, we were then able to slowly recover but in the last leg we sailed badly and fell back two places. In the second race we had a good start and despite the very light conditions we clearly showed it was possible to climb through the fleet. 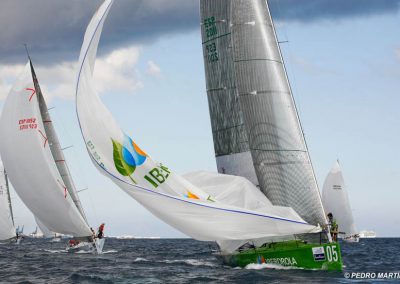 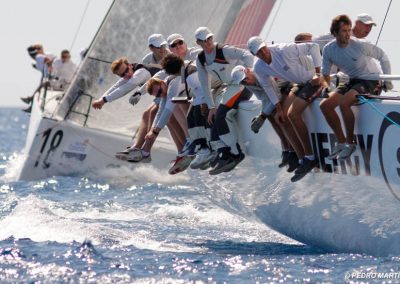 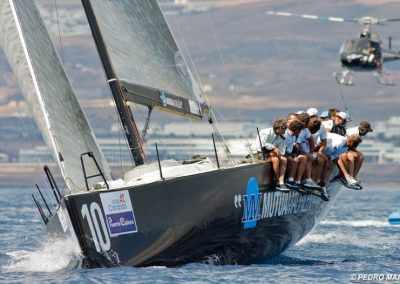 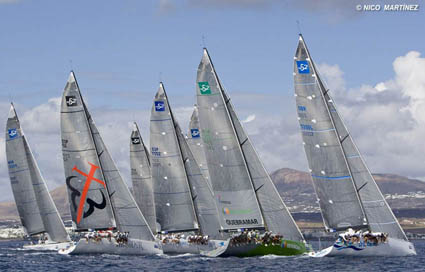 Back
← Classic Lanzarote weather for Day 1 of the TP52 Worlds Short Coastal, Artemis back on track →