Three first, the final one an impressive 100 meter comeback to pass the leading duo Synergy and Bribon. Synergy by two nailbiting gybes near the finish  resulting in a split second photo finish. Maybe we never know for sure whose bow was really first?

Matador only boat to get close in points, two thirds and a four.

Artemis doing just fine with two seconds and a seven.

Cristabella 9, 10, 5, seem to be okay for speed, still finding out a lot about their new boat.

Whilst the current Audi MedCup Circuit leaders were able to clear the first windward mark with a comfortable early lead over the team which had gone furthest to the right upwind, Russia’s Synergy. Quantum Racing rounded tenth.

From there Emirates Team New Zealand were unchallenged to the finish, while Paul Cayard (USA) guided Torbjorn Tornqvist (SWE) to a valuable second place on Artemis (SWE), with Matador (ARG) taking third.

Race 2
Emirates Team New Zealand won the second race in much the same manner that they earned victory in Race 1 With a start which was close to perfection in terms of timing and speed build, the Kiwi team were quickly in control of the fleet on the first beat, again leading at every mark of the windward leeward course.

Cayard and Hamish Pepper (NZL) conspired to sail a strong, confident race on Artemis, profiting a little when Matador and Bribon tussled towards the top end of the second beat.

Bribon were third all the way around the course but suffered when they went too far to the right on the final downwind, dropping to a sixth place finish.

Race 3
The third race was probably the most exciting. Synergy started well and were able to profit from an early position to the right. While they were then able to hold their lead around the windward mark Bribon were forced to tuck behind starboard tack Emirates Team New Zealand to round a close third.

The leading duo were comfortably clear down the final run when Emirates Team New Zealand took the race to leaders Synergy who were not quite as slick gybing under pressure. But the Russian team fought back and were less than half a boat length behind at the finish line. 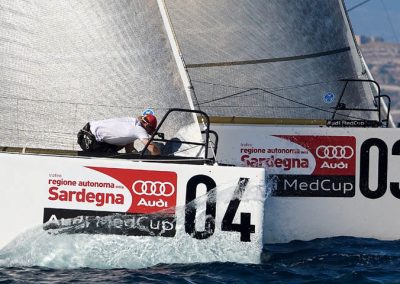 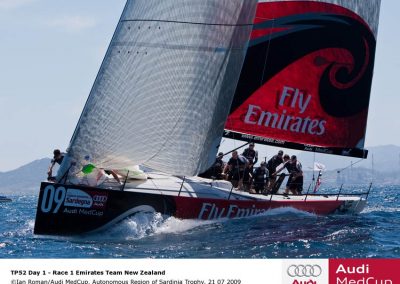