Quantum in the driving seat

Quantum increases overall advantage to 15 points with a 1st and 3rd.

Puerto Calero, 24 October 2008: Two more windward/leeward races were sailed today and two more opportunities for Terry Hutchinson and Quantum Racing to show their excellent tactics, crew work and boat speed. Showing great consistency, the American boat has consolidated its leadership, building a healthy 15-point advantage over second-placed Mutua Madrileña. In fact, Quantum has won two races out of 9 but has never finished worse than 6th. With two more races scheduled for the final day, Vasco Vascotto will have to race to perfection in order to have a chance in winning the championship.

The first race started after a 30-minute postponement, the time necessary for the breeze to get as stable as possible. Quantum had a clean start and opted for the left side of course, together with AUDI Q8, Platoon, Bigamist and Matador. The first beat finished with Quantum in the lead, while AUDI Q8 and Platoon rounded 2nd and 3rd respectively. At the leeward gate Platoon was now in front of AUDI Q8 and the shifty conditions forced the race committee to do a 15-degree change course. The left had once again paid and the leading three would keep their spots till the 2nd top mark. The last leg was a great one for Bigamist, the oldest boat in Puerto Calero. Showing no nerves and full confidence, Hugo Rocha called tactics in a spotless way and after having climbed several spots, overtook AUDI Q8 and finished 3rd, behind Quantum and Platoon.

In the 5-leg second race, Artemis, the reigning champion prevailed from start to finish. Russell Coutts was spot on in his calls and played the shifts correctly, unlike the previous race where they finished 11th. The real movement and action was taking place right behind them for second and third place. It could have been a straightforward issue between Bribón and Mutua Madrileña, both trading places on and off, but once again the American steam-train “Quantum Express” spoiled the party for Vasco Vascotto. After missing the first couple of shifts and rounding the first leeward gate 6th, good calls and boatspeed allowed Quantum to start the last leg in 4th place. That’s where Francesco Bruni probably made the worst call with the fleet opting for the right and Mutua Madrileña for the left. The hoped-for left shift didn’t materialize and Quantum grabbed 3rd place, behind Artemis and Bribón, while Cristabella stole 4th place from the Italians. With this victory Artemis is closer to securing 3rd overall, especially after Platoon finished 11th, following a penalty for a port-starboard incident with Desafío halfway up the first leg.

Sean Clarkson, mainsail trimmer on Quantum:
It was a fantastic day for Quantum. In the first race it was really fun being part of the boat’s afterguard. They just sailed a fantastic race. In the second one we missed the first couple of shifts after a perfect start. We were patient and waited for the shifts to come our way through, we passed Vascotto and had a great race. The left paid today but the boat was really fast; the trimmers did an excellent job. Compared to the MedCup, downwind we are going much faster with the new sails and the designers have done a great job with the sails. We used to feel weak downwind but now we are clearly faster. So, a perfect combination of a great afterguard, sail trimming and boatspeed resulted in an impressive day.

Pedro Mendonça, owner of Bigamist:
Today was a very good day for Bigamist and before its end we knew we would have achieved a good spot. Tactics in the first race were excellent and as everybody knows, this boat is not as fast as the rest, so tactics have to be very good, and this is what happened. We chose the left side on the start and downwind as well, we sailed the best we could. The level in this Championship is extremely high and I have to admit our crew is giving its best carrying out manoeuvres in the best way since a long time. We have found the best crew possible to optimize the boat’s performance. .

Tim Kröger, mainsail grinder of Platoon:
The first race was quite good. We positioned ourselves well on the start and throughout the race in this very shifty and tricky course. We were third at the top mark and managed to gain one spot and finish second. The left shift played well today even if sometimes you could see the boats from the right gaining. In the second race we had an incident with Desafío. We were on port and Desafío tacked rightfully on starboard in front of us. We had a very short time to react on that, either tack or veer off and pass behind them. We didn’t quite make it and passed behind them touching their stern. Luckily there was very slight damage and that was encouraging given the fact we were hit yesterday by the Russians. We immediately realized it was our fault, we were wrong and exonerated ourselves. From there on it was very difficult to recover, although in these very shifty conditions one should never give up because sometimes the opportunity what come for you to just walk through the fleet. At least we managed to pass AUDI Q8 and TAU Andalucia.

Ross Macdonald, tactician on Bribón:
It was one bad and one good for today. We had two good starts and in the first race we played the right side a little bit and when the wind got light we had trouble getting out of there once the wind filled in on the left. In these really short courses there is no chance of getting back once you are stuck. In the second race we started on the port end and that worked out really good for us. We went to the left side and played the shifts on the left side. We were third in the first mark; we managed to pass Mutua Madrileña in the second beat and finished second. It was a good race. 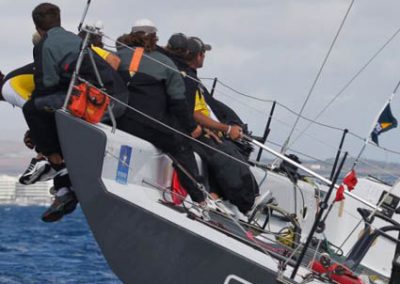 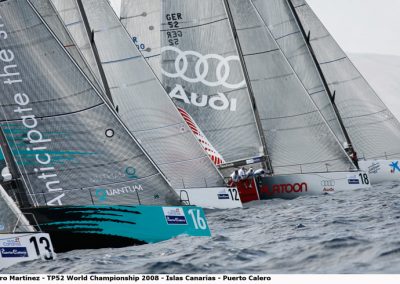 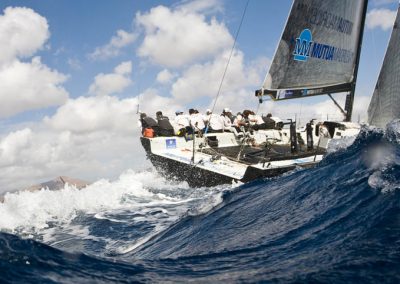