Great performance by Desafío, showing great control and the crew enjoying every minute of the race.

To say the long coastal race of the TP52 World Championship Islas Canarias Puerto Calero was exciting would be a major understatement. While the start of the week offered us light and shifty conditions, Lanzarote’s true breeze made its majestic entrance today. After yesterday’s short coastal race, the 14-strong TP52 fleet sailed the long one, approximately 53 miles long, in well less than 5 hours under conditions that offered accidents, failures, disqualifications and lots of emotion. The northern breeze blew with an intensity of 20 to 25 knots throughout the race and gusts reaching 35 knots on the western coast of the island.

The course initially took the fleet to a windward mark 1.6 miles from the starting line in front of the airport, before turning south towards Puerto Calero, where two buoys a few dozen meters from the breakwater gave the hundreds of spectators ashore the chance to watch the TP52’s flying by. They then headed south for the longest leg of the race towards the small island of Lobos. After rounding the mark just north of the island, the course headed northwest in a straight upwind leg to the westernmost tip of Lanzarote, off cape San Jacinto. That was the middle point of the race and the fleet returned back to the island of Lobos before the last upwind stretch to Puerto Calero to finish just off the marina entrance.

With 20 knots of northern breeze blowing off the race track, the race committee didn’t waste a moment and fired the gun at 11am. Similar to the trend this week, the left side of the course was clearly the favored one and Quantum, Platoon, Synergy, Desafío and AUDI Q8, opted for it and rounded the first offset mark in that order. Vasco Vascotto’s Mutua Madrileña was over the line and obviously started the race with a handicap. The rounding was eventful as Synergy was involved in port-starboard incident with Bribón and Desafío that resulted in the Russian boat’s bow hitting the stern of Platoon. As it was expected, all four boats raised the protest flags and the jury disqualified Bribón for not giving Synergy room.

Just like yesterday, doing well in the first leg at least guaranteed a large part of the result. Quantum stayed ahead of the fleet as they headed towards the next marks in front of the Puerto Calero Marina. Sailing upwind like steam-trains Quantum, Platoon and Synergy, rounded the two marks and headed south towards the island of Lobos. The reigning champion, Artemis had trouble recovering any positions, trailing the leaders in 9th place. The correct sail choices in the longest leg of the races, gave Platoon the leadership as they rounded the buoy north of Lobos.

The beat towards the San Jacinto buoy was to cause the first failures in the fleet. Yachts had to head back north in order to avoid the shallow waters around the island and then tack towards the mark. It was then when Artemis hit a wave and split their jib, causing damage to their headfoil, forcing the Swedish boat to sail the rest of the leg with mainsail and storm jib, closer to the Lanzarote coast while trying to repair the damage. The leg saw the leaders go front to back and front again but Platoon was first, followed by Quantum and Desafío in the San Jacinto buoy. In the run back to Lobos it was Quantum’s turn to break their spinnaker, giving Desafío the opportunity to grab the lead.

After Bribón’s disqualification and the sail damages on Artemis, Quantum and MutuaMadrileña seem to be the favorites but with 4 windward/leeward races in schedule it might just be too early to cry victory.

Paul Cayard, helmsman on Desafío:
It was a tough race, hard, rough conditions, we just sailed a little bit better than the rest of the fleet and got first place after also gaining a couple of positions. Under these conditions the key is to find the balance of sails and trim the boat properly. Most of the times we had a good trim and everybody else had difficulties because we didn’t always had the right jib on. On the last beat back home our jib was a little bit too big but we managed to protect our position. We sailed well, we had our boat balanced and we won in these very windy conditions. Tomorrow is just another day and we’ll have to sail well again.

Robert Hopkins, tactician on Quantum:
It was a very good day for us. We sailed around the course in one piece and had a great time; it was a fine race. We broke the spinnaker and had a cautious approach to the leeward mark and had to come in with the jib in the last minute. Desafío picked a better layline and beat us around the mark. The key was not to break anything but also going fast in a straight line as there was a lot of straight-line grinding, like the long windward beat. In the beat and the run we were fast and that’s why we weren’t fifth.

Cameron Dunn, tactician on Synergy:
We are protesting Bribón, we were calling for room to go behind Platoon and they just never came down, they didn’t give us enough space and we ended up hitting Platoon and Bribón. For us it’s quite unbelievable. The rest of the race was good; it was pretty windy at times, with real fresh breeze. We lost our wind instruments for about half the race and that made it a little bit more challenging to try and understand what was going on out there. In general lines it was a very good course, it was a nice windward/leeward game from mark 6 up to mark 8 and back. We have a fast boat for today’s conditions, we are fast reaching and that gives us a certain advantage. Yesterday we had a really bad first but managed to catch up. Today our first leg was definitely better.

Jochen Schuemann, helmsman of Platoon:
My whole body aches; it has been a very tough day. We had a collision with Synergy in the first mark that made a hole in the stern of the boat. Bribón was also involved in that incident. It took place 10 minutes into the race and as a result we were quite disadvantaged due to the water intake. We obviously protested but we’ll have to wait for the jury’s decision. During the first part of the race we were behind Quantum but after the leeward mark, with a very choppy sea, we were able to overtake them and place ourselves on the lead. We then had some problems sailing under spinnaker and they passed us again. Today’s conditions were very tough, to be honest we didn’t expect so much wind and waves, but we had a lot of fun.

Vasco Vascotto, skipper Mutua Madrileña:
Unfortunately, we started over the line. We then had quite a nice recovery and we chose an A5. It was a good choice that gave us the opportunity to pass a lot of boats but obviously our course was lower than the ones that chose the jib. Unfortunately, the wind increased and turned left more than what was expected in the forecast and as a result we were unable to gain as much as we wanted. Then we also chose a wrong jib for the last beat and we slipped back a lot. I don’t know why we sailed so slow, usually we are really fast under these conditions. Well, these things happen. At the top mark we were 13 th or 14 th and then under spinnaker we came back strongly, we pushed hard. This is obviously a bad result if you are aiming at the championship but we are still alive. Quantum is now 8 points ahead but this could be erased in just one race.

Russell Coutts, tactician on Artemis:
It was a great race today; we were able to see the true local conditions. To be true the wind didn’t surprise us because it was more or less what we had expected. Still, we broke our jib after the Lobos Island, but in any case we were behind the fleet and I don’t think we could have climbed up. 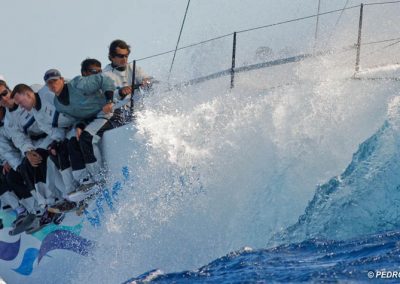 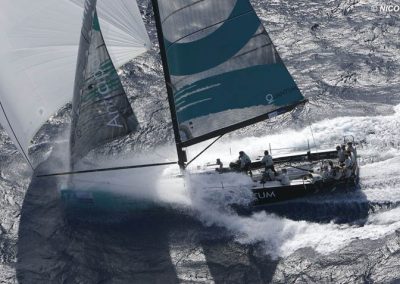 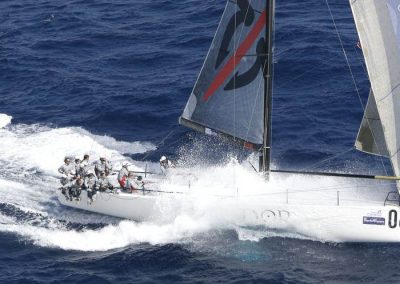 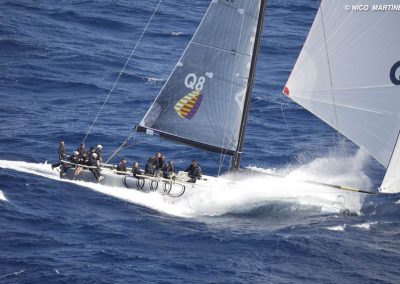 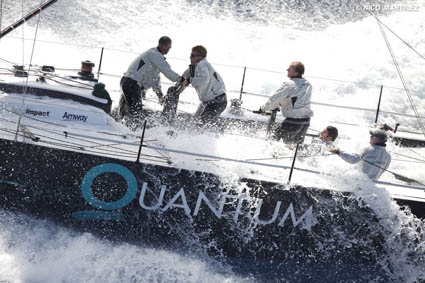 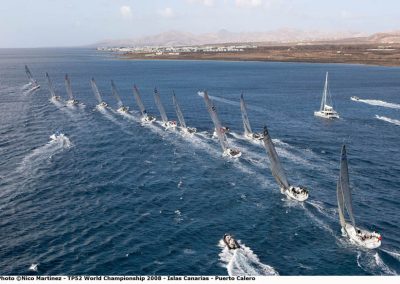 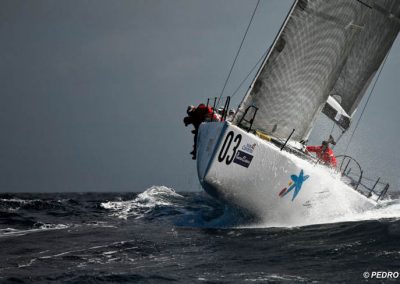 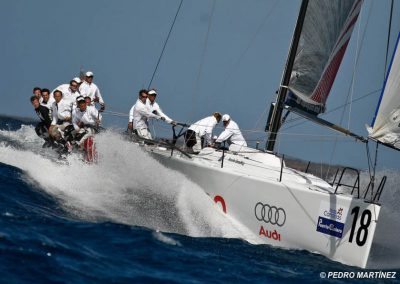 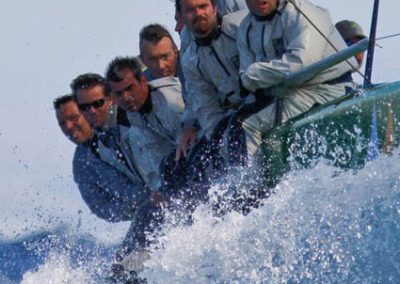 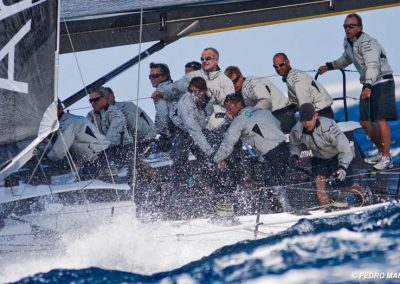 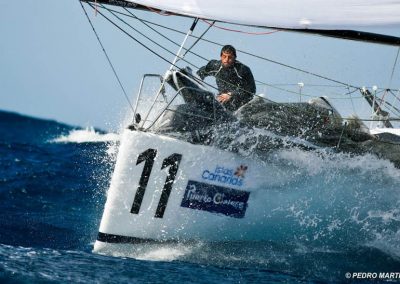 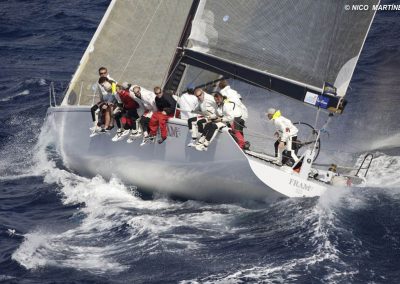 Back
← Short Coastal, Artemis back on track Quantum in the driving seat →