Ran In The Running,

On the strength of a first place and a second on Tuesday at Quantum Key West 2013, Niklas Zennström’s Rán Racing team stepped clear of the 52 SUPER SERIES pack with a lead of two points over defending 2012 52 SUPER SERIES champions Azzurra. Ironically neither of the top two boats sailed an error free day, both making penalty turns in successive races.

Racing conditions were close to perfect. The assembled 52 SUPER SERIES teams would always like more breeze – and look set to get have that wish satisfied Wednesday – but the 12-16kts of northerly winds for Races 3 and 4 of the ten race regatta carried plenty of shifts in direction and changes in pressure to challenge the afterguard members and ensure there were always options for gains and losses.

With Adrian Stead calling tactics for owner-helm Zennström, Rán Racing proved to be most consistent in the quest to use the shifts and changes to best effect. Azzurra’s coach Rod Davis summarised the challenge: “There were some reasonably big shifts, especially going back and forth in the first race. So the quest was to try and stay in phase with the shifts and still keep tabs on the whole fleet. It was a little bit complicated that way.”

In the first race of the day Rán Racing took the lead at the bottom end of the first run, whilst early leaders Azzurra had to take a two turns penalty as they left the leeward gate for fouling Rán on the approach to the gate. Azzurra’s resulting 720 proved a high tariff initially as they dropped to sixth, but the Italian flagged series champions managed to recover to fourth by the finish.

After a modest start to the second race, during which the breeze built to 16kts in the puffs, Rán Racing were first to push to the right side of the course and were able to very quickly build a strong lead ahead of Azzurra, nearly 60 metres clear half way up the second beat. But Vasco Vascotto hooked into a 30 degree shift with Azzurra which came in so quickly that Rán Racing could not get across to it and the blue hulled boat was able to lead at the second top mark. On a tight approach to the final windward mark Rán Racing judged themselves to have fouled Azzurra and, being safe, they chose to take a penalty. But, holding on to second, their results 3 points aggregate – sets them up as overall regatta leaders.

Rán’s tactician Adrian Stead is loving the 52 SUPER SERIES racing at Quantum Key West:
“ There is nothing in it right through the fleet. All credit to the guys on Rio. We know Synergy was always a very good boat and the guys are doing a good job in getting the boat up to speed and are sailing well, and the Interlodge guys have had a year in their boat and definitely have some pace. And Gladiator much stronger, stuff with the extra righting moment and so good for them, and Doug DeVos is doing a great job jumping into Quantum Racing and driving the boat. It is lovely. It is great racing. All six biats are in it, and you make a mistake and are suddenly sixth.”

Azzurra’s fourth in the first race could so easily have been better. Tactician Vasco Vascotto was less concerned about the big errors they have made than the fact he feels they have just not been sailing as well as they can as a team:
“We are lucky to be in the position we are because we have not sailed very well. So we are happy to be where we are. It gives us the opportunity to go out tomorrow and fight for something important. We can sail better, we made mistakes around the course and we need to sail a better level if we want to win. There are plenty of mistakes. The result is about how you sail the boat and if we carry on sailing the way we have been then we will not win the event.”

A disappointing sixth place in the second race of the day saw Tony Langley’s Gladiator slide from second overall to lie fourth, but still only four points separate the top five boats after four races.

Austen and Gwen Fragomen’s Interlodge and Manouch Moshayedi’s Rio were in the middle  of the action in both races, certainly showing good speed. With a 2nd in Race 3 the Interlodge team showed their potential. Equally pleased was the Rio crew with their 4th in Race 4. They were in or close to top 3 positions for most of that race, which was not only the 4th race of QKW, but also the 4th race they ever sailed on the boat. 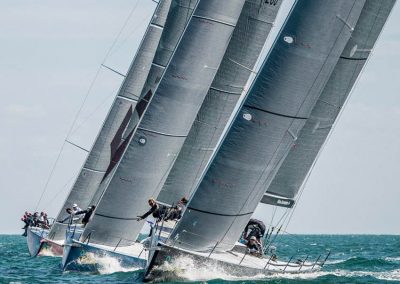 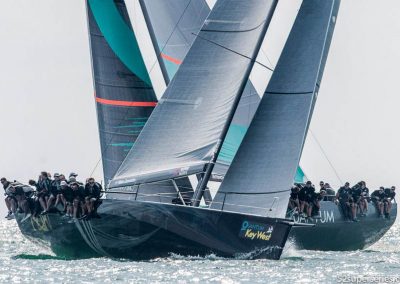 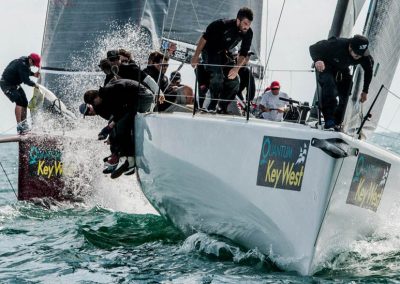 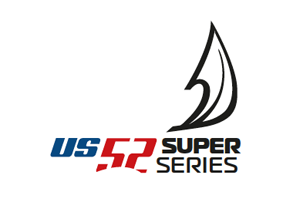