LOS ANGELES (AP) — Roy E. Disney, who died Wednesday at 79, was an avid ocean sailor who won the California-to-Hawaii Transpacific Yacht Race in record time a decade ago and backed programs to bring youth to the sport.

“He was very competitive, but we always had a lot of fun on the boat,” said Gregg Hedrick, who managed Disney’s boats and sailed 100,000 miles with him over 24 years. “We always had the best sailors on the boat and that was what made it fun ’cause he was such a good sailor and he could hold his own with any of them.”

The nephew of Walt Disney competed 15 times in the Transpac, a 2,225-mile race that begins off Los Angeles and ends off Oahu’s Diamond Head.

Hedrick said Disney was a sportsman “but you knew when it was a competitive moment on the boat … and we all worked really hard, you’d all work a lot harder for Roy because you wanted to see him win.”

In 1999, his 74-foot Pyewacket III was first to finish, completing the voyage in seven days, 11 hours, 41 minutes and 27 seconds. That broke the record of 7:15:24:40 set in 1997 by his son, Roy Pat Disney, who took over the job of skippering Pyewacket II after his father broke a leg and was unable to sail.

The record stood until 2007. Another new record was set this year.

Disney last sailed in the biennial Transpac in 2005. He planned to sail in 2007 but changed his mind just before the race began and turned his boat over to his son.

Transpac spokesman Rich Roberts said the surprise decision involved a project that Disney and wife Leslie DeMeuse-Disney were working on to train a team of young sailors to compete on their own in that Transpac.

The project drew more than 500 applicants in their late teens and early 20s. After a long period of training, 11 were selected to crew a TP52 named Morning Light.

Disney said at the time that he had become concerned about trying to follow Morning Light’s progress and sail his own boat at the same time.

“I’ve been apprehensive about it, and when you’re worried, maybe it’s not the smart thing to do,” he said.

A documentary called “Morning Light” was released in 2008.

Roberts said that on Wednesday, he received word that a member of that crew, Genny Tulloch, who has gone on to world class racing, had just learned she was a nominee for a woman-of-the-year award presented by U.S. Sailing sponsor Rolex.

“She’s the first one out of that Morning Light group to be nominated for that,” he said.

U.S. Sailing said in a statement that Disney made an impact on the sport from youth sailing to the Olympic level and beyond. 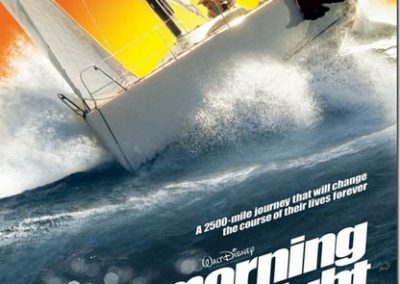