The Audi IRC Australian Class A Champion for 2013 has been decided with local entry, Rob Hanna’s Shogun V hitting the jackpot in a cliff hanger countback finish to the nine-race series.

Like the last time the championship was run at Audi Hamilton Island Race Week in August, the winning numbers didn’t drop until the lottery wheel was spun on the final day, and in fact the better score in the final race was the clincher.

Shogun V and Marcus Blackmore’s 2011 and 2012 Audi IRC champion, Hooligan, both finished with 16 points, the former winning the tie-break with Calm 2 third on 18 points.

“That’s amazing, we thought Hooligan had it,” said a surprised Hanna as the news was relayed on the dock.

“We were first around the top mark, Hooligan went for a fractional spinnaker and we went for the big bag (spinnaker) and tried to hold it all the way across; fortunately we could,” a grinning Hanna said on what he believed was their winning move in the final 16 nautical mile special course that finished spectacularly off Hanna’s home club, the Royal Geelong Yacht Club.

When asked whether a win for the local lad would be popular, Hanna laughed: “I hope so! It’s popular with me and my crew.”

“There isn’t much to separate the TPs here; they are three very fast boats. Congratulations to both crews, Hooligan and Calm 2. We thought we lost it because our crew work in the first race this morning was pretty ordinary, then we ripped our spinnaker. We were shaking our heads.”

“I have a really good crew but I can’t say enough about the competitors, they made the regatta and it was a lot of fun.”

Tactician Steve McConaghy was knocked for six: “To win on a countback is so special. It’s been good winds and an exciting regatta, it doesn’t get much better.”

Once results were announced, runner-up Marcus Blackmore immediately shook hands with Hanna, who had dogged him all week, saying “They’ve sailed well and deserve to win.”

“It was unbelievable, it’s pretty amazing racing when you have three of the best TP52s in the world all trying to beat each other, and letting the other guys in occasionally. Unfortunately that’s what we did today. We had a Code O up and Shogun didn’t, then we got on the wrong side of a 20 degree wind shift,” Blackmore added.

Jason Van Der Slot’s Calm 2 came to the Audi IRC Australian Championship anticipating a third but not such a close finish.

“It was a good weekend; we are still learning the boat and every race we learnt more,” he said. “We always thought we’d finish third but didn’t ‘think we’d be able to take it away from the other boats like we did. Marcus has had his boat for three years, Rob for two and we got on the water in October.”

By that race’s conclusion, Jason Van Der Slot’s TP Calm 2 had out-maneuvered the duelling pair and was wedged in between them in second place with a point either side.

The final race, a 16 nautical miler was a thriller, with the wind shifting 25 degrees around 160 degrees and building to 15 knots. 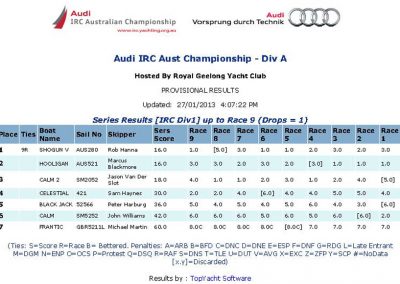 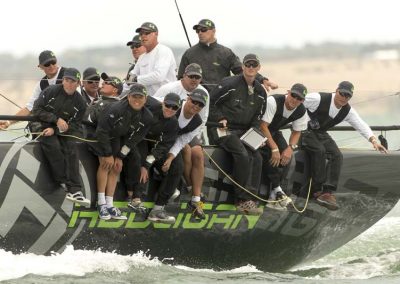 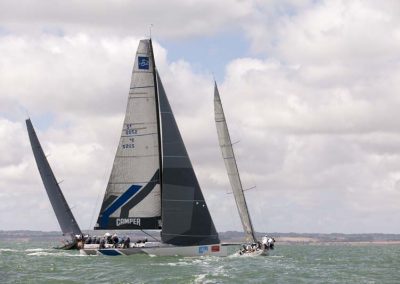 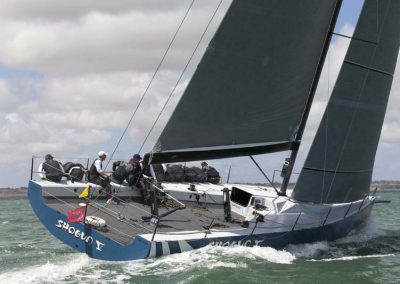