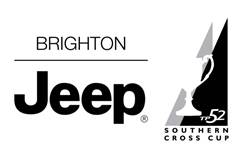 Mistakes will be costly as seven TP52s and one RP52 race under IRC handicap with an age allowance for the three early generation TPs, which has encouraged owners of these older boats to be part of the exceptional line-up.

The countback finish at Geelong’s Festival of Sails for Rob Hanna’s Geelong registered Shogun V and Marcus Blackmore’s Hooligan from Sydney’s Royal Prince Alfred Yacht Club is still fresh, and bets are on a re-match between the sparring partners.

Shogun V’s crew has confidence from their stirring win less than a fortnight ago to mount a solid defence and equally Blackmore, the dual Audi IRC Australian Champion who was shaping up for the trifecta until Hanna thwarted his plan at Geelong, is raring to get in the ring again and reverse the result.

“While it was good for the class and all credit to Shogun who was always knocking on the door, coming second is a bit like coming second in a fight – it’s not fun,” admitted Blackmore today.

“I’m really looking forward to this weekend. Four of the best TP52s in the world will be there and as owners we’ve adopted some exciting initiatives. I think the clue is keeping the owners happy by letting them take responsibility for the location, the format and the race officers. If this weekend works, we are hoping to take yachting in Australia to another dimension,” he added.

With the Audi IRC Australian Championship leaning on the final race at Geelong, nerves have barely had time to settle for Steve McConaghy, tactician on Shogun V.

“Our Geelong result has given us the confidence, but the breeze will play a big part,” he said this morning. “Hooligan is hard to beat in under 15 knots and Beau Geste will have the brilliance of Gavin Brady on the helm.

“It’s going to be super close, the four latest TPs will be inches apart and mistakes will be very costly. Final results will come down to boat speed, handling, and staying out of trouble.

“The age allowance is a good thing, if the older TPs sail well that might bring them into the results,” McConaghy added.

“How the sea breeze develops and what time it comes in will be the major influence,” Thompson reckons.

The options of a downwind start and laying a gate in the middle of the course aren’t common practice in Australian grand prix racing. Requested by the owners, these initiatives will cut down tactical options and compress the fleet at this juncture while making for breathtaking spectator viewing.

“The boats that get out early will break into clear air and gas the others,” suggests Thompson.

From his well-worn chair Thompson knows consistency over eight races will pay. He also suggests the fleet would be wise to stay wary of local entry Calm 2, Jason Van Der Slot’s latest TP which finished well within reach of Shogun and Hooligan at the recent IRC championship.

“This will be the best racing in the Southern Hemisphere in 2013 for big boats,” predicts Kiwi Gavin Brady, who will helm for Karl Kwok.

“Karl has not been in the 52 class for some time and we are looking forward to the short course battles after racing the maxi for three years. The short course takes away most, if not all of each boat’s advantages. This event will be all about the teams and getting the best out of the boats.”

Michael Martin’s Newcastle based 2004 launched Frantic is the class elder, followed by the two 2005 editions, John Williams’ Calm and Tony Lyall’s Cougar II from the Royal Yacht Club of Tasmania.

Scarlet Runner is actually an RP52 but its genesis is the TP52 design. The Southern Cross Cup is an IRC handicap regatta based on TP52 class racing and this has opened the door for Rob Date’s Sandringham Yacht Club based 52-footer to enter.

Racing is due to commence at midday tomorrow, Friday 8th February, off the host venue, Sandringham Yacht Club, with eight races comprising the series.

The public is invited to watch the action from the waterfront and from their own boats, and meet the owners and crew before and after racing.