Shogun Wraps It Up In New South Wales

It was a happy ending for Rob Hanna’s Victorian TP52 Shogun with a narrow countback win in division one of the Yachting NSW IRC Championship just reward for their herculean effort getting to the start line.

Shogun finished on equal points with Matt Allen and Warwick Rooklyn’s Farr 40 Bandit but took the Championship victory from the Sydney boat thanks to their five wins on corrected time from six races, with no drops.

“It’s always good to have a sail and it was a nice result at the end of the day. How can you knock this?” Hanna said motioning to the stunning Port Stephens playground as the sun set on the third annual Sail Port Stephens regatta.

“I’m not the greatest light air helmsman, having to focus for long periods gets to me after a while,” the winning skipper admitted.

According to tactician Steve McConaghy, Hanna did a superb job on the wheel, and the experienced and light-footed crew backed him to the hilt.

“We’ll be back” promised Hanna dockside.

Shogun will return to Sydney for the next event on the blue water calendar, the Audi Sydney Gold Coast Yacht Race in July, followed by Audi Hamilton Island Race Week in August then back to Melbourne for the Range Series and finally, a crack at the big one, the Rolex Sydney Hobart Yacht Race in December. 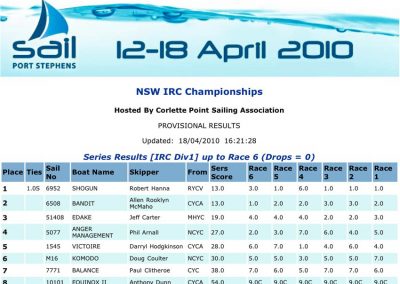