At the end Audi Azzurra Sailing Team glided serenely across the finish line of the one final race of the season in a gentle sea breeze and perfect September sunshine off Valencia to secure the overall 52 Super Series title.

When they started Race 8 of the Audi Valencia Cup, all that the team which races under the flag of the Yacht Club Costa Smeralda had to do was simply cross that last finish line in any place to ensure the season-long title was theirs.

In so doing they also won the Audi Valencia Cup, counting five first places, a second, third and fifth.

Their only regatta win of the four this season, Barcelona, Sardinia, Palma and Valencia, was achieved by a margin of seven points ahead of Jochen Schuemann’s Audi Sailing Team powered by All4One.

Niklas Zennström, the newly elected president of the TP52 class, steered Rán to a win this final contest of the season. With Quantum Racing finishing third, that was enough to give Zennström’s crew third step on the Audi Valencia Cup podium, and also third overall for the season.

The celebrations may have started early for the Audi Azzurra Sailing Team, having virtually wrapped up the title yesterday, but after seven years of trying the emotions and jubilation overflowed on the dock in front of the emblematic Veles e Vents building.

“We are very proud.” Grinned tactician Vasco Vascotto, “ It was a huge challenge, the standard is so high and so we are happy for the Yacht Club Costa Smeralda, for the Roemmers family (boat owners), for everybody involved it is such an important result.”

“But we need to start working tomorrow again, because I am sure that next year it will be harder and the teams will be ready to beat us. This is still a sport and so we have to always think not only how we won this year, but also how we lost in the past.”

Simon Fry, the British trimmer on board the winning Audi Azzurra Sailing team summarised: “I think the team has really endorsed the ‘leave nothing to chance’ philosophy. I think we have just been a little more diligent. I think the boat preparation has been excellent. And I think that on top of that we had the human element of a really, really steely focus. It was ‘the time has come, we have to deliver’. We have had the hardware in the past and failed to deliver. So there was a bit of personal pressure on, and a bit of peer pressure, this was the year we had to deliver.”

For Quantum Racing, the American flagged team which won the class title in 2008 and 20011, letting the 52 Super Series slip from their grasp at the last regatta is a bitter pill to swallow, but skipper Ed Baird stated they will learn from the experience:

“ Every race is a practice race for the next one. You have to learn from every mistake you have made and add it to your bank of knowledge for the next. And we certainly have learned a lot this week.” 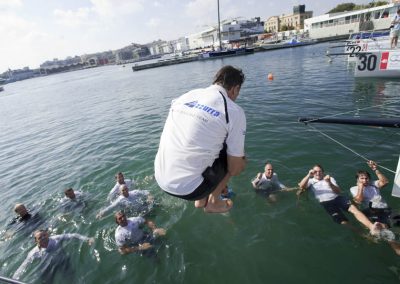 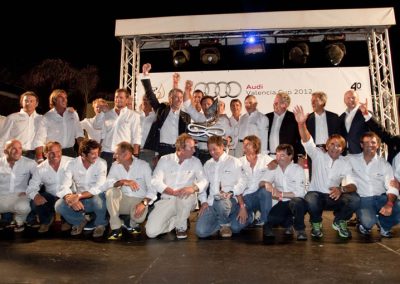 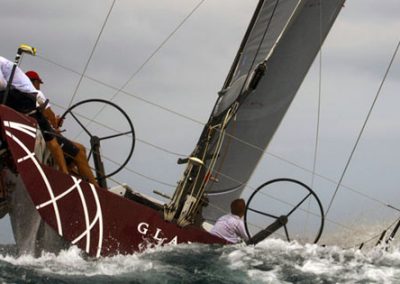 Back
← Thriller Finish Ahead Five Azzurra Bullets In 7 Races!! →