SoCal 52′ Class Association, a new TP52 initiave in the place where it all started!!

The SoCal 52 Class was created in April 2009 by a group of TP52 owners in Southern California who desire to race together as a class under a measured rating rule.  The Class is intended to promote and encourage racing among TP52s and former TP52s in Southern California.  Though some boats may still be in official TP52 Class configuration, the owners recognize that most will not – choosing to change sail area, displacement, and other items to generally improve boat handling and offshore racing capability.

The Class by-Laws were created with the same spirit in mind – encourage friendly competition among like-minded racers in fast TP52s.  The by-laws set reasonable limits on sails and crew to avoid an “arm’s race”, and the by-laws are flexible enough to meet the needs of what is intended to be a growing class.  A PDF of the by-laws is available on the SoCal 52 website: www.socal52.org
‘SoCal 52′ Class Series to debut in Hoag Regatta.

The Class has established a 2009 Championship Series with five Class regattas using a low point, no-toss system to determine an overall Class Champion.

April 20, 2009: Invitations are out for the 2009 Invitational Regatta for the Hoag Cup, which will feature the debut of the Southern California 52 Class Championship series for TP52s.

The June 12-14 event, organized and hosted by Hoag Hospital and the Balboa and Newport Harbor Yacht Clubs to benefit the Hoag Heart and Vascular Institute, is for large and fast monohulls adaptable to inshore or offshore racing. Five races are planned through Friday, Saturday and Sunday on windward- leeward courses close to shore.

Rasdal, a San Diego businessman who switched from racing sports cars to sailboats just a few years ago, sailed a conventional boat until acquiring Valkyrie a week before racing it in the Newport Harbor YC’s race to Cabo San Lucas in March. He came away raving about “the exhilarating planing and surfing performance of the boat in 18-plus knot winds.”

He added, “I don’t think anyone onboard has stopped smiling yet!”

The TP52, originally known as the Transpac 52, was conceived in 2000 by a consortium of naval architects involved with the Transpacific Yacht Race to create a simplified, all-round boat suitable for both distance and inshore buoy racing. It’s not a one-design class but one adhering to a “box rule” of limitations allowing, as many have, to change sail area, displacement and other items to optimize the boat’s handling and performance to meet conditions in various locations around the world.

Its extraordinary success is measured in the popularity of the Audi MedCup series in Europe in recent years.

The TP52’s appeal is a mix of performance, simplicity, versatility and inherent stability. It has no canting keel or running backstays to switch with every tack or jibe, and the class standard is a non-overlapping fractional jib.

Rasdal said, “The TP52 class represents the leading edge of design and construction technology in purpose-built racing yacht design and construction, but at the same time is engineered to be relatively simple to sail fast. [It] seemed like a perfect fit for our ‘Med-like’ Southern California wind and sea conditions. Equally as important, the TP52 is a great all-round athlete well suited for our combination of inshore buoy and offshore distance racing, including the 2009 Hoag Regatta and 2009 Transpac Race.”

In order to promote TP52s of all ages, the SoCal 52 class will be racing under IRC. The intention is to encourage participation from TP52s from all over the globe. More information on the SoCal 52 class may be found at www.socal52.org or by contacting Rasdal at 858.699.3878 or andyrasdal@gmail.com 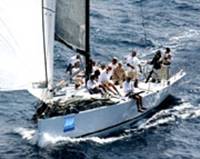