With 135 boats competing, the New York Yacht Club’s 157th Annual Regatta presented by Rolex, held June 10-12, broke all of its past attendance records, and with winds whipping into the high teens for buoy racing over the weekend, it certainly is in line for being the most memorable Annual Regatta in recent history.

The oldest regatta in the USA kicked off with an optional 18-nautical mile Around the Island Race on Friday that yielded Richard Oland’s (St. John, New Brunswick) Southern Cross 52 Vela Veloce as the IRC 2 class and overall winner, his performance worthy of a Rolex timepiece as prize.

In weekend racing, Oland’s team continued to fare well but was ultimately outmatched in IRC 2 by David and Sandra Askew’s (Annapolis, Md.) TP 52 Flying Jenny, which won and was followed in the standing by Peter Cunningham’s (CAY) IRC 52 PowerPlay, leaving third for Vela Veloce. 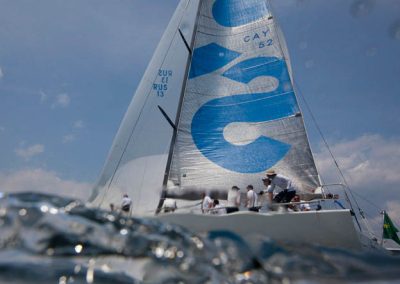