Ray Robert’s TP52 Evolution Racing had already wrapped up victory in the Racing Class after a dramatic days racing on Wednesday which featured a dead heat between Evolution Racing and Neil Pryde’s Hi Fi.

Had Hi Fi been a split second faster they would still have been in contention on the final day but as it was Evolution Racing had the luxury of knowing the series was won regardless of the outcome of the final race. It was a good day for Sam Chan’s TP52 Free Fire which ended Evolution Racing and Hi Fi’s monopoly on first place finishes after beating Hi Fi by less than a minute on corrected time. The result secured third spot for Free Fire ahead of King’s Cup veteran Frank Pong on Jelik III.

With the series victory Roberts and the crew of Evolution Racing soared into the lead in the Asian Yachting Grand Prix. They also gained revenge after losing out to Hi Fi last year and Roberts felt the dead heat in race 6 was the defining moment of the regatta, “Had it not been for the dead heat it would have been much more nervous today, there would have been a lot of pressure on but that’s sailing. People lose gold medals at the Olympic Games because of millimeters. It’s a tight business particularly when you have two very competitive boats and two very competitive skippers and crews, it’s always going to be a case of millimeters so it’s nail biting stuff,” he said.

Roberts was also quick to hail the efforts of everyone involved in organizing the regatta and is looking forward to the final day’s racing, which will not count towards the overall King’s Cup series, “Throughout the week we’ve had quite reasonable wind and it has been a really good close racing. I thought the courses were good and made for fair competition. It was good sailing and a good fun regatta, that’s why we all love to come here. We’re going to relax and have some fun tonight but we will still line up tomorrow and take the race seriously,” he said. 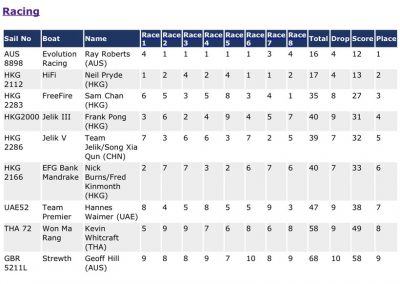 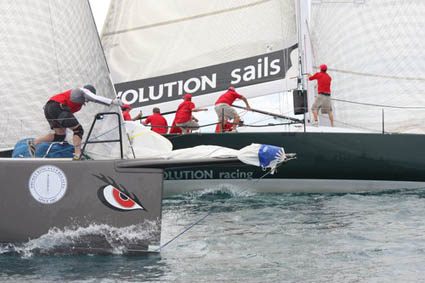