It was a long day on the water for the reward of just one race in the Cruising Yacht Club of Australia’s Rolex Trophy Rating Series today, where Marcus Blackmore and his TP52 Hooligan crew sailed into third place to maintain their series lead.

It was not all smooth sailing though, as both broke the start and had to return. Added to that, Hooligan is filing a protest against Wild’s  Reichel/Pugh 55 over a buoy room incident at the finish line.

Hooligan’s crew boss Terry Wetton told of a difficult day. “We made a good comeback and got back into it. We headed left and that got us back up into third place.”

“We had a very intensive start and came out pushing hard. We went left off the start and that paid well. It was mixed fortunes for us actually. We were leading the fleet after the first lap, but our upwind speed was disappointing. We managed to hold onto first place though,” said Hiatt, who owns the Living Doll clothing label.

Rob Hanna’s response to hearing he’d lost first place by 13 seconds to Hiatt was: “Ah, so he got me, I would have been happier with a bullet, but he’s a mate, so I’m happy for him”. However, Hanna brightened up when told he had moved into third place overall.

“I’m pleased to have a good result. I wish we’d had time for a second race; Shogun’s good in the really light stuff. The start was hairy though; it’s difficult when you get so many good boats trying to start in light breeze.”

PRO Denis Thompson initially delayed racing on the two lap windward/leeward offshore course, waiting for a stable breeze to fill in. They waited and they waited, but nothing more than 2 knots escaped from the skies and left the yachts on a merry-go-round as light airs kept going around the dial.

So uncomfortable was the waiting in such conditions, everyone moved to the more comfortable waters of Watsons Bay, just inside South Head and waited it out there. They were still there until called back offshore to start Race 3 at 2.30pm. Finally, in a 5 knot NNEerly, the fleet was away, the breeze clocking further left as the race developed. Those who went right paid the penalty.

Marcus Blackmore who won both races yesterday with his new TP52 Hooligan was over the start early, along with second place holder Bill Wild’s Rodd & Gunn Wedgetail and Peter Millard and John Honan’s super maxi Lahana, all having to return to the start.

Tomorrow crews will swap short windward/leeward races for an offshore passage race of up to 27 nautical miles, due to start at 11.00am, weather dependent. 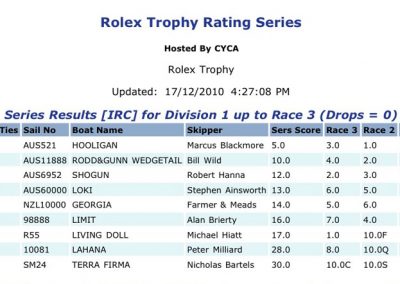 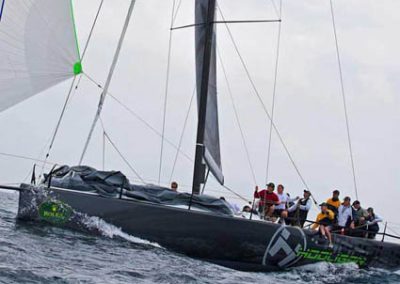