Cagliari Conditions At Its Best.

We tried a new combination of one WL Race and a short 30 mile Coastal and that worked fine. Certainly a combination that needs some breeze. Which we had, combined with a 12.00 start, the boats finished racing at 16.30hrs.

AUDI All4One had a strong day again. A 5th in the WL Race, but with Quantum in 6th still good business.

Container was impeccable in the WL Race to win, but could not keep the trend for the coastal (6th).

AUDI All4One and Quantum both realised the coastal would be the key to succes for the event and from the start made their intention clear to win this one. A great fight for 1st from start to finish showed us the two boats as connected by a piece of elastic, stretching to 7 or 8 boatlenghts the most.

Jochen and his team did it, equally fast at all angles of sail and with some surplus jib reaching. But also very equal in crewwork and mark roundings. The red brigade has come a long way.

Quantum did all they could, made very little if any mistakes. Great to watch.

Audi Azzurra was best of the rest, they had a similar bond as the first two with “good old” Bribon. The 2009 Bribon certainly is not showing her age.

Synergy, whose starts were again the best of the fleet, has to find how to keep the concentration up till the finish. Ran, after a good WL Race, could not get it right for the coastal. Too many tacks, too many small mistakes, put her at the back of the fleet only to find out they made the wrong choice of kites for the coastal causing the others to sailed away from a lonely Ran still on the jib.

At the finish it was very close for the first 6 boats, a great sight. Anyone can win this…

============
Seb Col, tactician, Audi Sailing Team powered by ALL4ONE (FRA/GER):
“In general we like coastal races, and sailing here in Cagliari is a real pleasure The race’s been very interesting because Ed Baird and the guys of Quantum have been pushing us so hard  throughout the whole course. Luckily we were fast, especially upwind but also reaching. We haven’t been able to open a gap on Quantum, they were always very close so we couldn’t afford the smallest mistake. I think we’ve only been able to make the difference five to 10 minutes before the finish when they’ve started to look behind in order to control Azzurra which was coming back on the right hand side, it’s been then when we’ve been able to get away. The key point was to be at the front as early as possible, and to keep solid in spite of Quantum’s attacks. Also it was a great last upwind…”

Jochen Schuemann (GER), skipper-helm, Audi Sailing Team powered by ALL4ONE:
“It was a tough race, and, I think, a well deserved win. We found some boat speed in the heavier airs and we are definitely not slower than the competition when it is windy, if anything a little faster upwind, which is a good sign as that was part of our struggle after the first three events.

Ideally with the Mistral tomorrow we are not scared of anything tomorrow.

We wanted to go left. Synergy crossed the fleet quite early, they got  very nice right hand shift and we were second at the windward mark. We were a little stronger downwind took the lead and from there on we lead all the way. I think that tight reaching and upwind we were a little stronger than Quantum Racing who were second all the way. I think there was never a chance for them to get past us.

I think it was a great coastal race for all of us. The fleet was very close and I think that os the beauty of this circuit. We have been coming to regattas and getting last and second last and now here we have a chance to win the regatta. That is how close these regattas are.

We love it here, we finished second here last year.”

Ed Baird (USA), Skipper, Quantum Racing (USA):
“The day ended up at the very top end in what we can do with these boats. Early in the day, in the first race, it was great, a bit shifty, but in the coastal race it got really windy it built up. It was 25-27 knots and that´s a lot of windspeed for any boat, everybody could feel it. It was interesting for a long race, people saw different opportunities to use their spinnakers, people that had smaller ones kept them up for longer, and those with bigger ones couldn´t use them as long. Tough choices had to be made. It was certainly interesting to see what was going on. We are thinking about the season not just about the race. Obviously, we didn´t like finishing sixth in the first one, but we are not looking at any position or any particular boat at this event. For the season ALL4ONE has moved forward, but we´ve also moved forward from the people who were close to us on the scoreboard”.

Vasco Vascotto (ITA) strategist, Audi Azzurra Sailing Team (ITA):
“ Finally a good day for us coming back to the dock without have to dry our tears. We sailed with the right approach, we passed a crisis moment. For us usually when the avalanche starts to come down we keep rolling down with it. But the teams that have the “balls” can stop it before it takes them away. We were the best boat today, so it was perfect.” 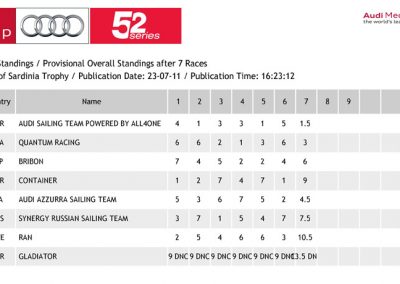 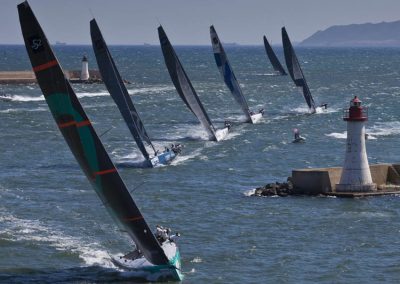 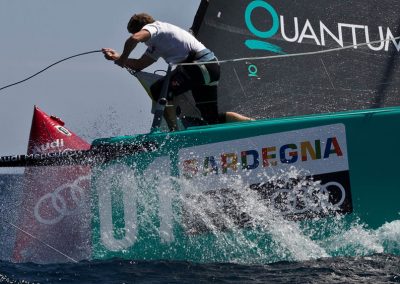 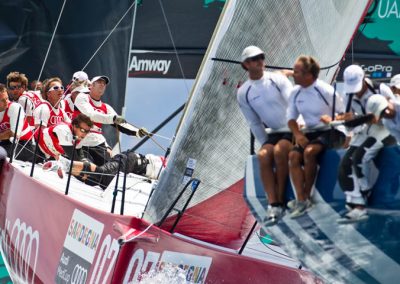 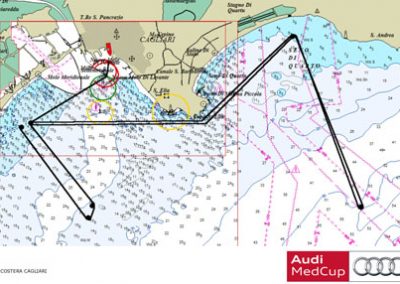 Back
← All4One Magic Not Over, Bribon Good Second Over The Moon & Big Relief →