Over The Moon & Big Relief

Audi Red and Audi Blue, All4One and Azzurra, two very different teams in identical boats, both struggling in their own way in the first two events, took away all doubt about both team’s and their boats abilities on the final day of the Audi MedCup Cagliari event.

It was Azzurra that took the day with a 2nd and 1st, but All4One that took the event and with quite some margin, 9 points over the second placed Azzurra.

Container was up and down this week, three firsts, but also two 7th and a 6th place.

Quantum Racing’s final day followed the pattern of their first day disaster, but this time by gear failure (backstay) and having to do a penalty turn in race 9. Resulting in 5th for the event. Still leading the series, but the others got closer and it is fair to say that it is all very open again.

Jochen Schuemann (GER), Skipper, Audi Sailing Team powered by ALL4ONE (FRA-GER):
“First event win ever for this Audi team, last year we finished twice second, so this is quite special for us, . We´ve sailed really solid these last days. Today, we broke the spinnaker in the first race while hoisting, that was quite stupid and could´ve put us at risk but the second race went great. It feels good to win, not more not less, it will be hard next time. We had a good lead but we had three boats really close behind us for a while. It´s a very close competition and we are looking forward for the next regatta in Cartagena”.

Sébastien Col (FR), tactician, Audi Sailing Team powered by ALL4ONE (FRA-GER):
“ It feels good to finally win a regatta. At the beginning of the race we didn’t expect it. We wanted to do things well. This is a victory we will enjoy. In Marseille we knew already that that the potential was there and we’ve finally found the key points the get the boat sailing well, which gives us confidence for the upcoming regattas. In the next one we should find similar conditions but with a bit bigger seas. We will still learn things from the boat and we’ll still discuss with the designers and our coach in order to get the maximum out of it. I believe we were at the maximum during the last two days, what’s really satisfying”.

Ed Reynolds (USA) project manager, Quantum Racing (USA):
“Over the years I don’t think we have had a breakdown, or done circles (penalty turns) and we end up with both on the same day. We came in and tacked too close to Synergy, it was not a cheap foul, it was one of those things.

You load these boats up so hard and although we check these things meticulously, it was the top terminal where it goes around the eye went. The guys sorted it really quickly. It is the first time we have had a major breakdown in the Audi MedCup Circuit.

But in the bigger picture, between crying and joking, we were saying that maybe wants to win the MedCup. Container did not have the week they wanted, but the two Audi boats did a great job here.

It is hard now to know who you need to focus on.

Cartagena will be difficult because anything can happen there. You can have the roughest inshore racing you will ever see, or it can be really docile. What is very intriguing is that we were surprised how quick we were compared to the fleet in Cascais, and I think none of us could explain it. We made some changes and had a jump in those conditions, but now you are starting to see the boats perform in the ‘bands’ we kind of expected.

It has been very erratic here. The first day we did not see anything which was broken, but our style of sailing did not translate well on this course. But the irony today was that if we had been back in that conservative mode of sailing we would probably have won that second race. But, staying out of the middle, towards the edges which seemed to work the whole time….It was not an easy regatta to be a tactician.

But I think that in the flat water, in the bigger breeze and flat water our bigger foils are not so good as in the bigger seas the fuller foils are a good thing. We will see in Cartagena. You are never going to win an event unless you sail better than the other guys.”

Francesco Bruni (ITA), tactician, Audi Azzurra Sailing Team (ITA):
“Looking where we were two days ago, finishing second it’s a great result. The boat was great today, we did small changes the were very helpful, but we sailed very well: nice starts, nice tactic, nice manoeuvres… Today and yesterday we sailed with our heads as we didn’t do in the first days. We also had great fun, when you win doing well with strong winds, it’s impossible to not have fun!”

Francesco Scalici (ITA), grinder, Bribón (SPA):
“After the bad result of Marseille, we came here to change the things our goal was to finish on the podium. But of course, to be third just 1.5 points behind the second leave us a little bit disappointed. It was a fun sailing this week, also if very, very tiring. I’m destroyed.”

Vasco Vascotto (ITA), strategist, Audi Azzurra Sailing Team (ITA):
“In the bad moments we always stick together and never give up. We finished second at this event it is almost a miracle. I am very proud of our shore crew we had some good meetings during the bad moments and that is the key, to keep working for the future.” “We are finally smiling! It’s a big move from last to second in two days, and gives us lot of hopes for the future. It’s also a message for the other teams: even if sometimes we are on the ropes we come back!”

Gonzalo Araujo (ESP), patrón, Bribón (ESP):
“We are happy, it has been a tough event, with a lot of wind, which is not our boat´s biggest strength. We are satisfied with how we hanged in the third position against more stable boats. Our boat doesn´t sail as well upwind, it goes faster downwind. So far it´s going well, we´ve improved quite a bit. In Cascais we were in the last positions because we had problems with the sails, but we fixed it. From then on, we´ve always been in the fight. We have to keep escalating, we´ve passed RÁN in this event and we are just one point short of Synergy”.

Guillermo Parada (ARG), patrón, Audi Azzurra Sailing Team (ITA):
“We had a rough beginning of the week, where things didn´t go our way. In times like those it´s important not to lose your motivation. We´ve proved both to ourselves and to the rest that we can recover and sail well together. We have to trust our team and keep fighting. The truth is that we were not mad at each other during those bad days, we knew that we had to keep on going, that´s this team´s key, to fight everyday.”

Paolo Bressani (ITA), deck hand, Audi Sailing Team powered by ALL4ONE (FRA/GER):
“It was almoust a perfect week, just today in the first race we did a mistake losing and breaking the spi, probably we got relaxed after seeing that Quantum retired. In the second one we did a great second, putting the sign on the week. At the beginning in Cascais we had problems with the spi, we changed founding more speed downwind. The boat is very difficult to sail and to understand, so we needed a little bit of time .” 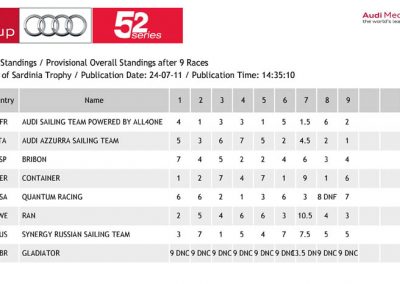 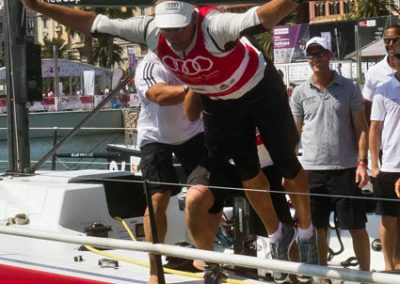 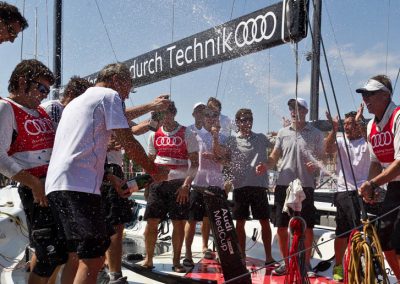 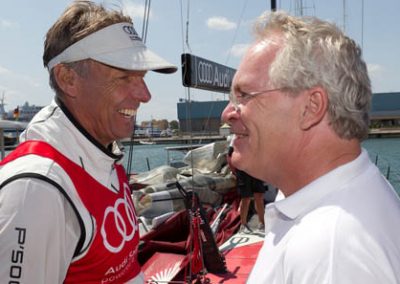 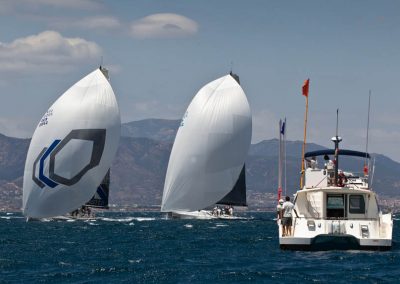 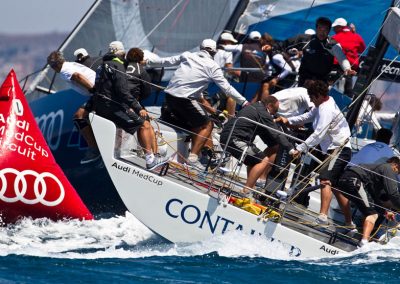 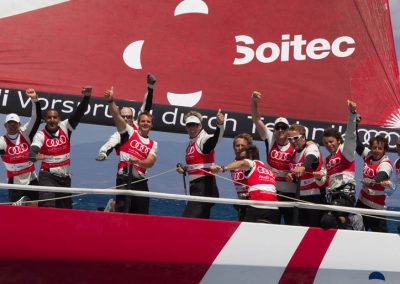 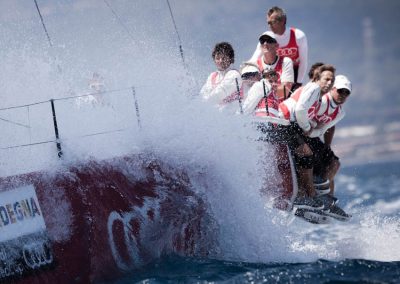 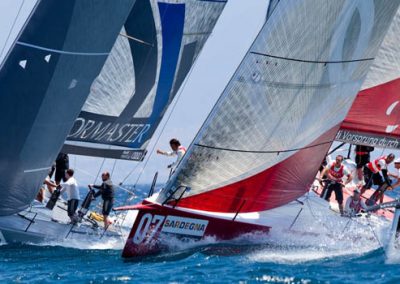