José Cusi looking back at the competition and 40 years of yacht racing with a big smile.

It has been communicated in the spanish press that his friend and sailing partner King Juan Carlos will retire from competitive sailing on the final day of the 2011 Audi MedCup, at the Barcelona event on September 17.

The Bribón I, launched in 1972, started the series. José Cusi acquired her at the Fair of Valencia, where the then Prince Juan Carlos also bought a sistership, called Shere Khan.

It was after the Munich Olympics, where Prince Juan Carlos took part in the Dragon, that it was decided to join forces.

The two men and the white boat stayed at the top of the game for near 40 years and were instrumental in bringing high level international yacht racing to Spain.

Brilliant to see José Cusi enjoying today’s racing so much and a pity that his friend could not be there to enjoy the day.

Today’s racing: Differences in wind pressure between the inner and the outer race areas and strong shifts have marked the second day of races of the 30th Copa del Rey Audi Mapfre. Difficult conditions for the 117 helmsmen of the seven fleets of this 2011 edition, and for the race committee which had to wait between half and one hour for the breeze to settle enough to race in all four race areas.

While in race area Alpha, in front of the airport, N-NWly was the predominant direction, the Bravo and Charlie areas enjoyed a SWly breeze, known as Xaloc in the local argot. Neither of the breezes built above the 11 knots today.

It was a good day for José Cusí’s Bribón, whose two bullets set them in second after day two. The first race for the IRC A fleet started in a NWly breeze which soon shifted to right reaching the 150, thus matching the prediction, and finally established at the 135.

This favored Bribón, which went to the left after a good start at the pin end to leeward of the fleet, and Aifos steered by HRH Princess Cristina, which chose the same side.

Leader in the scoreboard after day one Container could only finish eighth in this first race, but got even for it with a second in the second race, right behind Bribón, which signed her second win of the day. That gives Araujo and his crew a lead of five clear points upon Container which is second, followed by HRH Felipe of Borbón steered Hispano’s 5-3. A royal day… 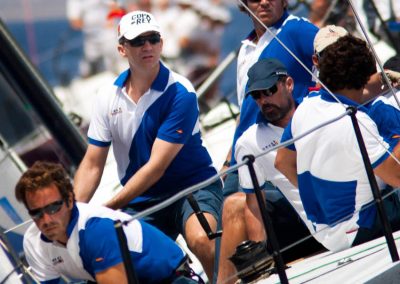 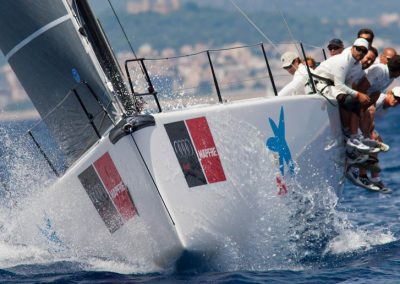 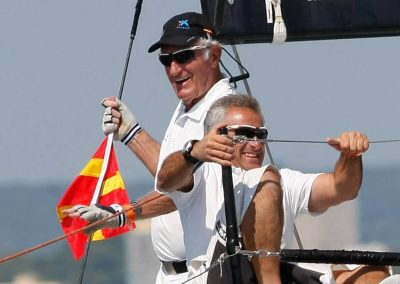 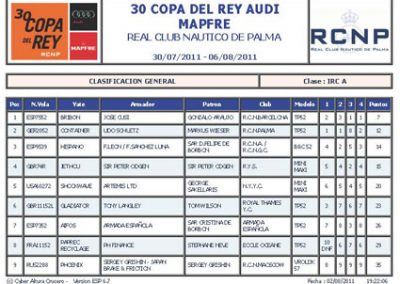