After a postponement of approximately one hour due to the lack of wind, racing started at 13:00 hours.

The coastal was shortened to 24 miles as the 10 knots of southerly breeze, known as Embat in the local slang, soon lost its intensity and dropped down to seven knots as it shifted to southwest. With six races to go a discard is likely to be applied from tomorrow after a minimum of eight races. That should bring Container closer to Bribon as they have an 8th position that they will be glad to see removed.

Bribon rounded the first scoring mark in first position on handicap, 14,3 miles from the start and managed to cross the finish line 14 miles later in 2nd, beaten by the american mini-maxi Shockwave of George Sakellaris, which now moves up to third in the overall classification after five races.

Not a good day for photo’s, so one of Bribon during todays race and one of a start of Day 2. 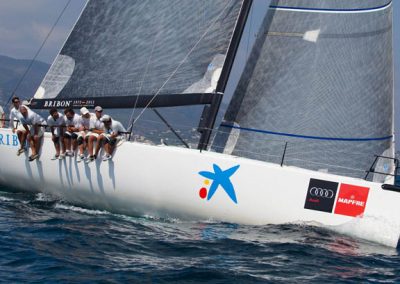