Gained from two contrasting races, a sixth and a first for Emirates Team New Zealand was enough for the Kiwi team to extend their overall lead in the Marseille Trophy regatta to sixteen points going in to the final day.

Dalton confirms that their mood, even with a comfortable lead into the last day, is focused but even, just as prevails through their America’s Cup campaigns, win or lose, looking at the long game rather than any short term outward satisfaction:

After the excitement and high speed thrills of Friday’s TP52 Series’ coastal race to Cassis, what started as a hot, slow and sticky day as Quantum Racing appeared to have increased the pressure on the overall leaders when they posted a third place in Race 8, three places ahead of the Kiwi team, ended with a sting in the tail.

Dean Barker (NZL) and the Kiwis bounced back with their fourth win of the regatta while their nearest rivals pulled the pin too early on their start.

Jumping the gun, Quantum Racing (USA) rescued an eighth just as they did in the first race when they committed the same mistake.

But the outstanding performance of the day was that of Synergy (RUS). With Cameron Dunn (NZL) calling tactics they posted a first and second to elevate themselves to fourth in the Marseille Trophy standings.

In hot sunshine, the light 9-10 knots SSW’ly breeze seemed to promise a decent day of racing with the TP52 Series and GP42 Series fleets moved to the north Rade area for the first time, racing in the western approach to the bay of Marseille.

A long delay and move back to the Rade sud was rewarded with a quickstep second race on 16-19 knots of breeze. Emirates Team New Zealand and Synergy were able to hook into the shift and extra wind pressure on the left side of the track, with the regatta leaders leading all the way to the finish.

In the first race, with Frioul islands now to the left of the windward-leeward race area it seemed the left paid best for those who were smart enough and early enough to reach it. Synergy and Bigamist were among the first to break from the left, pin end of the line and were able to round the first windward turn in first and second places, while a clear air strategy, staying out of the higher risk traffic areas making a well timed starboard approach on starboard allowed Quantum Racing to round third, which they held to the finish.

Emirates Team New Zealand were often on the back foot during the first race after rounding seventh at the first turn. At the second leeward mark as they rounded overlapped with Artemis (NZL) outside them there was an incident which saw the series leaders make a subsequent penalty turn.

Dropping Valars 3 (RUS) as a result, they could only make tenth at the top mark but with Ray Davies (NZL) and Adam Beashel (NZL) reading the better breeze that remained on the left in the folding breeze, they were able to rescue an important 6th place.

Synergy scored their first win on these waters since the Reichel Pugh design won last year in the colours of Larry Ellison as USA-17, with Bigamist 7 helping their prospects of a podium finish here in Marseille when they finished second. The Portuguese then slumped to a tenth, making the same mistake alongside Quantum when they both were over early.

A long delay and move back to the Rade sud was rewarded with a quickstep second race in 16-19 knots of breeze. Emirates Team New Zealand and Synergy were able to hook into the shift on the left side of the track, with the regatta leaders leading all the way to the finish. 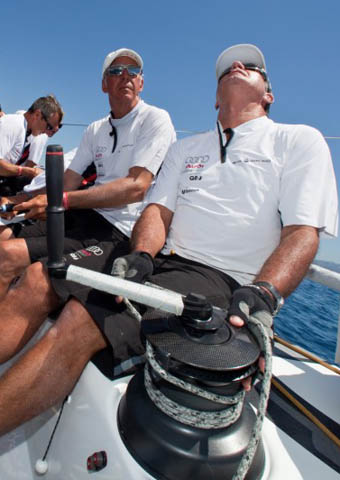 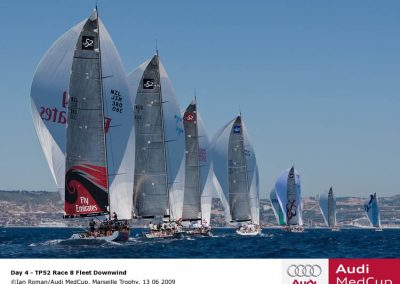 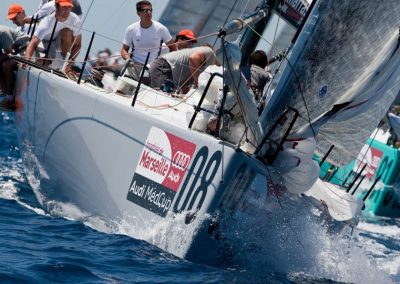