From an intense three day of three races local favourites Azzurra roll into the final day of the 52 SUPER SERIES season with a slim three points lead over Quantum Racing in the standings for the Audi Settimana delle Boche, the last regatta of the season.

The iconic Yacht Club Costa Smeralda team will celebrate the 30 years anniversary of the club’s participation in the America’s Cup with a gala dinner Saturday night, with past Azzurra Americ’s Cup crew taking centre stage. The current Azzurra 52 crew would dearly like to ‘finish the job’ – as skipper Guilermo Parada describes the task facing them, signing off on the 2013 season with a regatta win.

Azzurra were the most consistent performers over the three races, scoring a 2,1,3 against circuit leaders Doug DeVos’ Quantum Racing’s 3,4,1 which was matched also by Niklas and Catherine Zennström’s Rán Racing which went 1,5,2.

With a dying Mistral fighting a new NW’ly breeze the race course out of Porto Cervo was riddled with opportunities, not just with the shifts in direction as the shifts frequently moved across from the right and then faded, but also with the breeze diminishing across the day, it was mentally taxing to keep in the best of the wind.

Azzurra’s Vasco Vascotto and Francesco Bruno were, for the most part, on great form, separating a couple of times from the pack’s prevailing thought pattern to make key gains. But while the return of Bruni to the team – which is sailing with two members of the Roemmers family on board this week – certainly complements Vascotto’s decision making process, it his steadying influence which has been the biggest asset to the crew, according to skipper Guilermo Parada:

“ We definitely feel comfortable at home here, but having Cecco back on the boat is a plus for us. He has brought us some steadiness. We have won some magical races in the season but then made silly, basic mistakes. Now we are managing to avoid the second, trying to maintain the first. We need to remain focused and finish the job.”

It may be the top three teams on the overall 52 SUPER SERIES standings which shared out the race wins today, Rán Racing winning Race 4 comfortably, Azzurra taking Race 5 and Quantum Racing the day’s final race, but Ergin Imre’s Turkish flagged Provezza were right up in the mix at each of the first mark roundings, getting third in the second race, while Austin and Gwen Fragomen’s Interlodge scored a close second behind Azzurra’s win.

Azzurra made the best start on the pin end of the start line in the second race but had to chase runaways Interlodge and Provezza around the top mark first time up. Azzurra took the lead on the second half of the second beat and could not be caught.

And in the final race Quantum Racing were fast, challenging Rán Racing through the leeward gate, overtaking upwind when they read the better pressure to lead at the top turn second time up, going on to win.

The decision will be taken in the morning whether the showdown for the regatta trophy will be fought on a second coastal course or around a pair of windward-leeward tracks. Champions elect Quantum Racing ardently want to complete the clean sweep of all four 52 SUPER SERIES regattas, can Azzurra stop them?

Niklas Zennström (SWE) Rán Racing (SWE): “The weather conditions were just a bit lighter today than previous days and I think today we just decided we need to make sure we had three good races today. Let’s see what we can achieve on the last days of the season to get close to Azzurra and Quantum Racing. This week we have seen Azzurra and Quantum Racing are both very consisitent and Provezza are up there, Interlodge are up there from time to time so I think that the fleet has certainly got better and it has become closer over the season. I think we were not so much on top of our game earlier in the week. The last day of the Maxi Worlds was pretty intense and it was an intense week so rolling straight into the 52 SUPER SERIES has been tough and so we were quite happy there was the big Mistral yesterday and we had some time to relax and chill out.”

Ed Reynolds (USA) Quantum Racing (USA): “I don’t think these guys change their process from one race to the next. They just go out to win and don’t really pay attention to what the points are. If we do our jobs well, whatever happens with Azzurra, we have a shot at winning the event. Trying to get in phase was difficult and just watching the weather. There was a little more breeze early on and just trying to time the right hand shift coming through that was the biggest issue today. It would fade sometimes. “

Nick Rogers (GBR) Provezza (TUR): “We are having a proper regatta. As a team we are growing and learning. Here we are going a bit faster through the water which is good. We are learning lots of small things. The team is getting better all the time, eking out a few more metres here and there. We have some changes. We had Chris Main doing tactics today and had some great windward mark roundings but we struggle for speed downwind still. It is hard to go backwards through the fleet but it was good overall.”

Guilermo Parada (ARG), skipper helm Azzurra (ITA): “It was a very intense with the weather pattern which is not so typical here. We had a fight in between a NW’ly breeze and the end of the Mistral. It was jumping and shifting a lot and so it was very difficult to decide which side of the course to choose. There was different pressures around the course and luckily Vasco and Cecco (Francesco Bruni) were good in that and we were able to achieve three good results. There is the one more day today and it is important for us to finish the job, to finish the season on a high note, not only for the yacht club but for the first time we have both owners on the boat. So it would be pretty big for us to achieve a good result here. We are comfortable here, most of the top teams know this place as well as us, but being at home we definitely feel comfortable but having Cecco back on the boat is a plus for us. He has brought us some steadiness. We have won some magical races but then made silly, basic mistakes. Now we are managing to avoid the second, trying to maintain the first. We need to remain focused and finish the job.” 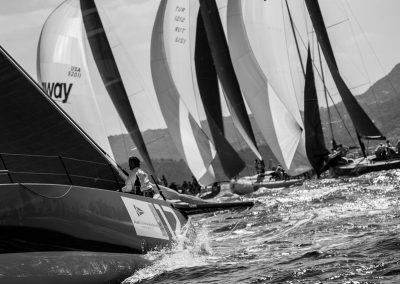 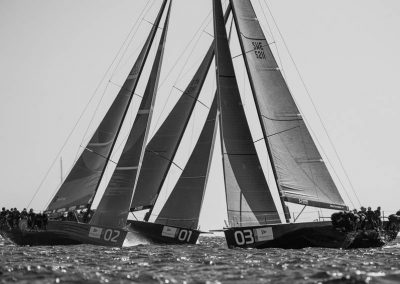 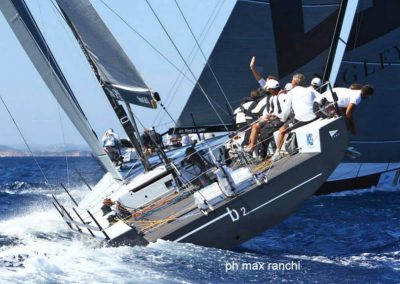 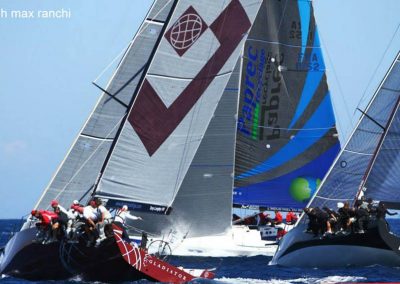 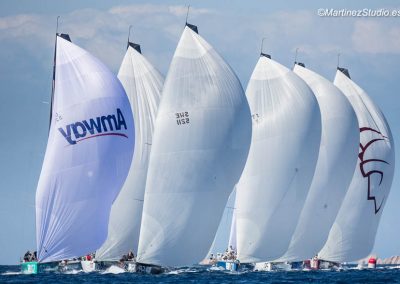