Bit of a wait, but when it filled in another tricky day on the water emerged for the teams.

Race 4 saw ETNZ taking their favorite position and Quantum having a shocker.

But Quantum bounces back with two 1sts for Race 5 and 6.

However ETNZ take over the event lead with a 3rd and 2nd for these races.

Terry Hutchinson (USA), skipper-helmsman Quantum Racing (USA):
“ Lots of ups and downs today, in the first race the top mark deltas were all really good. And we went round the four top marks in 4,1,1. But unfortunately down the first run of the frist race Luna Rossa gybed on us and we were kind of hanging to leeward of them and went to gybe in clear air and a GP42 was coming upwind and we just about hit them and so we had to do a hard turn to back out. We got a little knot in our spinnaker sheet. That compounded a lot of the problems, but mainly it put us back in the traffic fairly quickly. We got to the bottom mark in probably seventh or eighth but really we were in bad shape from there and not going the way that we wanted to go.”

“ We got ourselves a little bit clear. We got tacked on by Cristabella, tacked on again by Luna Rossa and quickly found ourselves moving backwards, as you’d expect and towards the end of the beat.”

“ We rounded the top mark tenth and down the last run Adrian and Kevin got us in a really nice spot of breeze and we made a really nice gain in front of Matador but then just couldn’t get for the finish line, that was tough. After that we had two good starts and had two solid races which is very reassuring.

Dean Barker (NZL) skipper-helm Emirates Team New Zealand (NZL):
“It was a good day for us, we took our opportunities when we could and stayed out of trouble when we could. It wasn’t easy.
First race we had a nice start and drag raced out to the right with TeamOrigin and Synergy and got around just ahead of Synergy. We had good speed and had a good solid race. Second one we did not have the best start but we went what we thought was the right way but there was a bit of a left shift at the top, we were looking pretty strong at one stage. And in the last race we had a really good battle with Quantum Racing, so it was a good fun racing.”

“We are really happy. It was important to go out and have a good solid day and we did that. Artemis is sailing much better here than they have at the other regattas, but we haven’t seen them all regatta yet, but they are only a few points behind.” 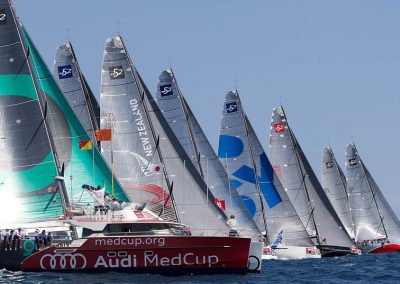 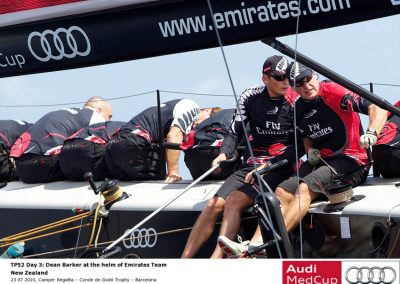