Hooligan Makes a Menace of Herself in Rolex Trophy

A spectacular start for passage racing in the Cruising Yacht Club of Australia’s Rolex Trophy Rating and Passage Series’ today as the combined fleet took off from Watsons Bay sailing sprung sheets as they headed out past North Head on a passage race of approximately 24 nautical miles.

Bob Oatley’s super maxi Wild Oats XI, skippered by Mark Richards, looked imperial as she took pole position at the leeward end of the line and gunned it, clearing out on the rest of the 31 boat fleet.

However, the day belonged to Marcus Blackmore and Hooligan again. The TP52 is proving to be a tough competitor in the Rating fleet and even a challenge from Loki was rebuffed, Hooligan the winner overall by over two minutes to the RP63, Loki.

Pittwater yachtsman Marcus Blackmore, of Blackmore’s health products fame, continues to be overjoyed at the performance Hooligan has produced since being plonked in the water just three days ago after undergoing IRC modifications.

Hooligan’s owner should be proud; he now has a five point lead over nearest rival Shogun, Rob Hanna’s TP52, Shogun from Victoria with a drop score in place. With one race remaining, it is improbable Hooligan will be beaten.

Blackmore took particular satisfaction today when, he says, he stood at the stern of his yacht and looked back. “There were boats behind us that should have been in front of us; it was the most satisfying moment I’ve had for some time,” he said.

“The crew work was outstanding today; especially the foredeck. I’ve got three guys who’ll be doing the next VOR (Tom Addis, Stu Bannatyne and Tony Rae) and they put our young guy Tyson Lamond to the test – they did peel after peel – he did a great job and really got a work out,” chuckled Blackmore, who withdrew his protest of yesterday against Rodd & Gunn Wedgetail.

The series winner, Hooligan, the TP52 owned by Marcus Blackmore (NSW), had a few hiccups on the course and finished the race fourth overall after struggling to get their spinnaker aloft and then tearing it. However, their three wins of the five-race series guaranteed their overall victory and Blackmore was still smiling. “Not our best day, but it doesn’t matter, we won the series,” he said. 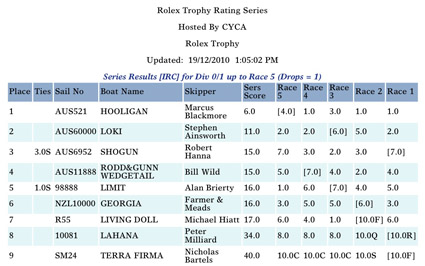 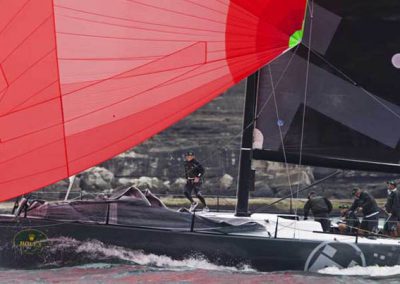