The Rolex Sydney Hobart, which started from Sydney Harbour at 1pm this afternoon, is shaping up to be two quite distinctive races wrapped into one;  the first half, from Sydney Heads to Flinders Island on Tasmania’s north-eastern tip and the second, from Flinders to the finish in the Derwent River.

As the fleet settled into a broad reach on flat seas in the early hours after the start, in the back of everyone’s mind was the classic southerly buster waiting for them further down the coast. The breeze swung around the dial from the west to the east, and at 5.30pm this evening, the front runners had run into the first of three anticipated southerlies and had shifted gears accordingly.

The southerly is likely to intensify overnight, with the worst conditions of the Cruising Yacht Club of Australia conducted race anticipated in a 12 hour stretch tomorrow.

Wild Oats XI skipper Mark Richards expects Bob Oatley’s 30-metre long supermaxi to be entering Bass Strait around 9am tomorrow, which is when they are likely to launch into south/south-westerly winds of up to 35 knots and steep, lumpy seas.

By Monday night, life on board will be a proverbial washing machine. The drivers’ job will be to get the boats down to Flinders Island in contact with their rivals, while keeping them in one piece.

Unlike other Rolex Sydney Hobarts, where constant wind shifts and changes have kept them on their toes the full 628 nautical miles, this year they really only have one big decision to make in this first installment of the race.  What angle do they want to enter Bass Strait on?

Once in the lee of Tasmania the second race begins: the navigators’ race.  In difficult to predict conditions, they will have to make the tactical decisions that will win the Tattersalls Cup, or lose it.

“You will be able to lose the race in the first 300 miles,” says Will Oxley, the navigator of Rodd & Gunn Wedgetail, “but not win it.  The second half, off Tasmania, is where the race will be won and lost.”

One bad call can leave a yacht becalmed, a mocking breeze pushing her rivals past her just a couple of miles away.

Ironically, while this will be the time for the navigators and tacticians to star, it is also precisely the half of the race when the boat drivers will need to lift their game an extra gear.

Cold, wet and tired after some 36 hours of drenching watches perched on the rail, crews will need to find the reserves  to drive themselves and their boat just that bit harder than anyone else, putting in that extra sail change, executing maneuvers with the same precision as they do on a day’s sprint around the buoys.

The fleet can be tracked on Yacht Tracker at: www.rolexsydneyhobart.com 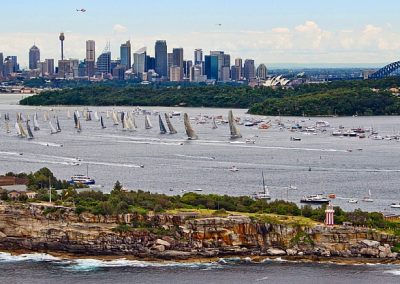 Back
← Hooligan Makes a Menace of Herself in Rolex Trophy Shogun Gets Close, 2nd in IRC-1 and 3rd Overall →