The Quantum Racing crew came ashore today at the Marina of Portimao having secured the overall Audi MedCup Circuit 2008 title.

Through a long, gruelling season Quantum showed to be the most consistent boat.
Terry Hutchinson and the crew of the American boat Quantum Racing won the Audi MedCup Circuit 2008 with a day to spare in Portimao, Portugal when only one race could be completed on the penultimate day of the Portugal Trophy Regatta.

As the breeze fell away to force the abandonment of the second race today, Race 7, and then precluded any further competition it meant Quantum Racing had built a n unassaibale lead of 52.2 points over second placed Bribon with no more than three races possible Saturday for the 15 boat fleet.

Since Alicante in May, at each of the six regattas this season in Spain, France and Italy, skipper-helm Hutchinson (USA) has spoken only of the end goal, of lifting the Audi MedCup Trophy in Portimao and today that win line was breached. Along the way Quantum Racing won the Region of Sardinia Trophy in Italy and the Breitling Regatta in Puerto Portals, Mallorca.

Consistency in this white hot TP52 fleet is acknowledged to have been even more difficult to achieve this season, but Hutchinson confirmed that Quantum Racing’s average score coming in to this regatta was 4.1 and until they came to the Algarve only twice had they finished in 10th or worse.

“ It feels unbelievable! We have worked really hard all season and it is a culmination of this effort” said a delighted Hutchinson on the dock, “ The last two regattas for sure have been the hardest because we have been defending a fairly healthy lead and you always have in the back of your mind that one or two little mistakes cost a lot of points. So I cant tell you how relieved I am to tell you we have done this with a day to spare.”

“ Our mind set from the beginning was to continually get into the top five in every race throughout the series to benefit, we have been averaging a 4.1. A lot goes into that consistency. It’s a fast boat, good equipment, the same team from start to finish of the season. Here, I have been relying heavily on everyone on the boat as I have been focussing very hard on doing my own role the boat speed. I think as we progressed our team rose to the challenge every time.”

Quantum Racing’s win may have stolen the thunder from the final day of the season, but there should still be no shortage of drama. Not only do the on-form Matador have a slender hold on the Portugal Trophy, but they have crept up to be just 15.8 points behind second placed Bribon, and Platoon powered by Team Germany’s run of 2,1,1 has taken them to 17 points behind fourth placed Artemis (SWE).

Three races are planned for Saturday with a planned start sequence counting down from 1100hrs.

Ed Reynolds (USA), Project Manager of Quantum:
“ When we conceived the plan it was a big leap of faith to come in as high profile as we are, to make the statement as we have. The only sure thing was that with Terry everything would perform as best it could, we would be pushed as hard as we could be, and as always everything would come through, and he has just been amazing. It doesn’t matter what Terry does, he takes it full on!”

“ Everyone has been fantastic our company, our supporters, it could have gone upside down. I was absolutely sure we could do it, it was nerve wracking at times, and when you get this close you start doing the maths in your head all the time. We were obviously huge beneficiaries of that race being abandoned today, but we have been on the other side of the ledge so many times and in sailing there are moments when you get the breaks too. You just have to be good enough to position yourself to take advantage of them. We are going to take it and are not apologising for it! It feels absolutely incredible!”

“ But the guys want to win the regatta here too, they won’t fully kick back, but the nice thing is they will just relax and be sail boat racers now. Every other deliverable has been handed over beyond expectations.”

Dean Barker (NZL), helm of Bribon (ESP): “Quantum are very deserved winners of the MedCup, I am really please for them, they have put a great programme together, sailed well, been very well organised and haven’t really had any weaknesses, the reason in the end they have been so successful.”

Mariano Parada (ARG), Strategist of Matador (ARG):
“ We are really happy. In the second half of the circuit we have had some very good results and are obviously very pleased with our situation right now. But we still have some races to do tomorrow and everything is very open – both for the Trophy of Portugal as for the overall circuit – we have Platoon close behind us in one and Bribon close in front in the other! Tomorrow there wont be any time to recover if we get a bad result so we are going to have to be careful, but we are focussing more on this event than the overall. Although I have to admit that in the back of your mind you always have the Medcup circuit there, because it is what we have fought hard for all year!” 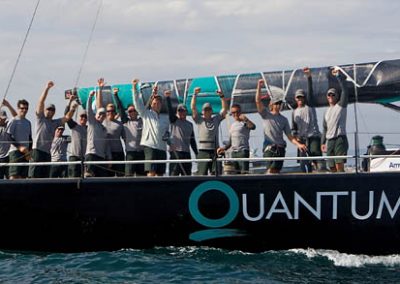 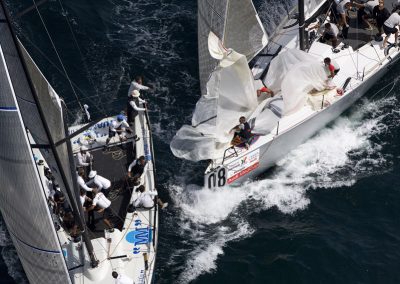 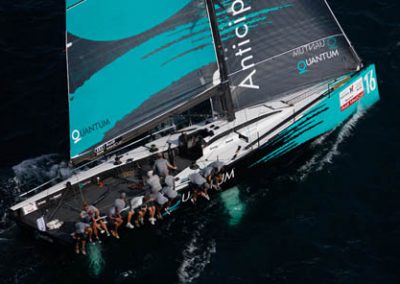 Back
← Light but two more races Quantum completes the Double! →