Quantum Racing complete the double as they add the Trophy of Portugal to their overall victory in Audi MedCup Circuit.

Steered by skipper Terry Hutchinson (USA), who started putting the winning campaign together just less than one year ago and has raced on the circuit over each of the three previous years, Quantum Racing won in Cagliari on Sardinia in Italy, at the Breitling Regatta on Mallorca, Spain and now in Portimao on Portugal’s Algarve coast.

As well as their three regatta wins Quantum Racing finished third at the first regatta of the season in Alicante. Fifth in Marseille in June was acall to raise their game, according to Hutchinson, and their fourth place last month in Cartagena, Murcia, Spain was enough to keep them firmly on course for the championship title they clinched yesterday.

A first and a fourth placed today for Quantum Racing pushed them to the top of the overall Portugal Trophy standings, winning by four points from Matador (ARG) who were let down by a disappointing 11th in the first race.

Alberto Roemmers’ Matador team have been the most consistent over the second half of the season finishing second in Mallorca, second in Murcia and now runners-up in Portugal. Their hat trick of second places ensured that they take third place on the season-long Audi MedCup Circuit standings.

Jose Cusi’s Bribón (ESP) finished with a second and a fifth today to cement their best ever season’s end finish in four years on the MedCup circuit, second overall. Steered by Dean Barker (NZL) with Ross MacDonald (CAN) as tactician, Bribón won in Cartagena, was second in Alicante at the start of the season and finished third in Marseille, fifth in Cagliaria and, ironically, had their worst score on the boat’s home waters off Palma, seventh.

Winds were light again today and expired entirely in the late afternoon but the re-scheduled morning start allowed two decent windward -leeward contests to be completed. Quantum’s sharp starting and acute tactics were key to their victory in the first race, just holding off Bribón by seven seconds.

Bringing the tally of teams which have won a race or more than one race this season to 13, Vicente Tirado’s CXG Corporacion Caixa Galicia (ESP) took the final winning gun of the season. Second at the first mark behind Matador, CXG’s tactician Andy Horton (USA) spotted better breeze and sniffed out a wind shift isnhore which brought them through to lead at the first leeward mark.

With 53 races completed this has been a long and demanding season traversing most of the Mediterranean and finishing on the Atlantic. Countering the supposition that a new TP52 is vital for success, the second and third placed boats for 2008 are both well optimised 2007 build Judel Vrolijk design boats. Quantum Racing is the only new Botin Carkeek design on the circuit and is their first MedCup Circuit winner since Pisco Sour in 2005.

The winning Quantum Racing crew are a mix of long-standing friends and some former members of the Team New Zealand team which won the Louis Vuitton Cup with Hutchinson as tactician last year, including Mark Mendelblatt (USA) as Quantum Racing’s strategist, navigator Ian Moore (GBR/IRL) and Jeremy Lomas (NZL) bowman.

“We were all friends before and when we have difficult times on the boat and difficult conversations on the boat we can have good open, honest, candid conversations about improvement and in order to get better this season we had to do that, and I can’t thank them enough for the efforts that they have put in. And to end it like this is for them because of the effort they have all put in.” concluded Terry Hutchinson. 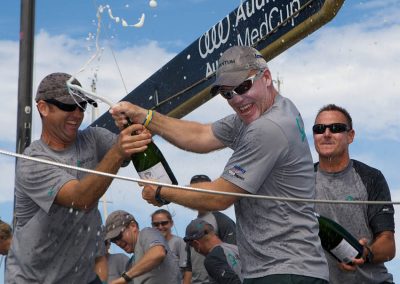 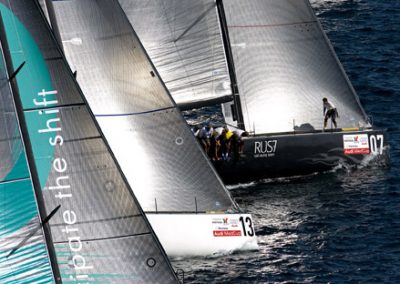