A seventh place compared to Artemis’ tenth means the tables are turned and the winners of two consecutive regattas, Emirates Team New Zealand, now lead the Portugal Trophy by 1.5 points.

The SW’ly 5-9 knots sea breeze proved unstable, streaky and challenging with puffs, lifting shifts from the right side, especially up towards the windward mark in the Lagos-Alvors corner.  After Bigamist lead around the first mark, by virtue of their early hitch inshore to the right, it was the Russian pair Valars and Synergy which then profited on the downwind leg when they, too, stayed inshore, closer to the beach.

Leading the Portugal Trophy into Race 7, Artemis were found wanting at the start when they failed to nail the pin end start they sought. From eighth position they dropped to tenth on the final run. Emirates Team New Zealand also slid on the last downwind, dropping to a seventh but lead the regatta again.

ETNZ lead by 1.5 from Artemis who are 2.5 points up on Quantum Racing, with Bigamist only 1.5 points shy of their first podium finish.

Katie Burns won the Quantum Sails contest for a place in the team during a MedCup event.

Not only did she enjoy it, but somehow  she managed to get some of the 2008 Quantum Magic back into the team.

I would bring her to Cartagena…. 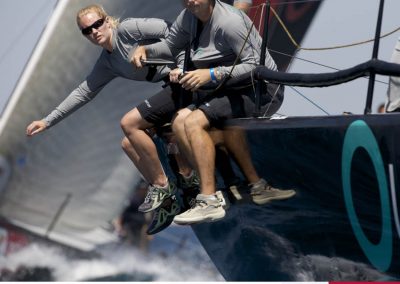