Hooligan wins Audi IRC Series with a day to spare.

Marcus Blackmore and his TP52 Hooligan (NSW) have won Class A of the Audi IRC Series at Geelong today after victory in Race 7 cemented the deal – and the win came at his introduction to Audi Victoria Week.

Despite there being one race remaining tomorrow, Hooligan cannot be beaten. Her nearest rival, Living Doll (Michael Hiatt) from Melbourne, is nine points behind with a drop in place. Even with the drop reinstated, the Pittwater based boat is in the box seat.

“I know we don’t need to sail tomorrow, but don’t worry, we’ll be on the start line anyway. I’m here to race, not to swan around,” a visibly happy Blackmore said aboard his boat.

The Blackmore’s vitamin king paid tribute to his crew. “Tom Slingsby (his tactician and a four-time world champion in two separate classes) did a good job today. Actually the whole crew has sailed well,” Blackmore said of his highbrow crew.

“The last work got us to the line first in the last race; our boat speed was good. The results could have gone anyway today, it was that sort of day,” he said.

Asked would he come back to Audi Victoria Week, the affable yachtsman said: “Yes, I got this boat to race regattas and apart from the first two days, I really enjoyed myself here.”

The race is now on for second and third places overall. The Farr 55 Living Doll reclaimed second place overall today by winning Race 6, pushing Stephen Ainsworth’s RP63 Loki back down to third place.

Loki, from NSW, finished second behind Living Doll in Race 6, but dropped to fifth place in Race 7. She is now one and a half points behind Hiatt’s boat with just one race remaining in the Audi IRC Series.

The pair’s nearest competitor is the Melbourne based Cookson 50, Terra Firma (Nick Bartels), which is 10 points behind Loki.

Conditions were difficult and required 100 percent attention from tacticians in particular. Light 8 knot winds flicked from north around to an easterly direction and were patchy.

The Audi IRC Series concludes tomorrow with Race 8 of the Royal Geelong Yacht Club hosted series, to be sailed on a windward/leeward course, starting from 11.00am, weather permitting. 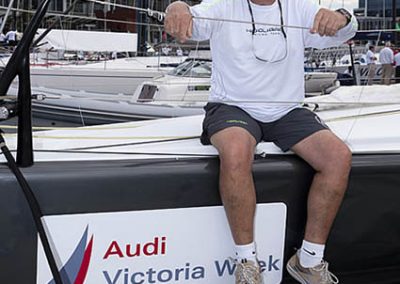 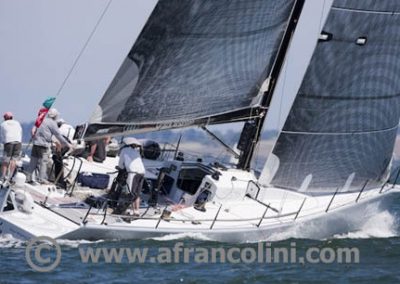 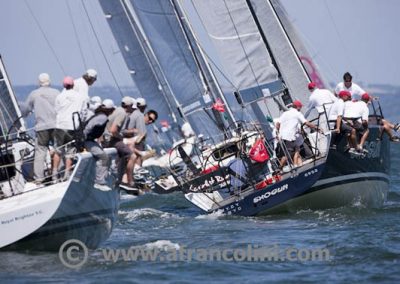 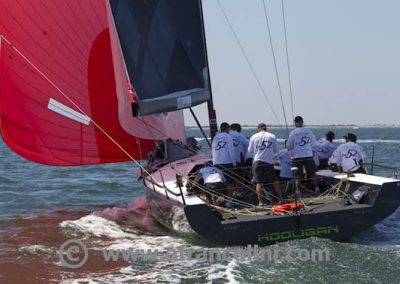 Back
← Great Race Week For 52's Hooligan Does It Again →