Team New Zealand sailors have been at the forefront of the MedCup Circuit on different boats since the first year of racing. In 2006 the core of the winning Mean Machine crew, and the second placed Warpath crew were both from Team New Zealand.

That was part of the Kiwi America’s Cup team strategy of battle hardening every aspect of their sailing team in the lead up to the Louis Vuitton Cup – which they won – and the America’s Cup match, which they narrowly lost. In the aftermath of the Cup, all of the sailors involved in both, universally admitted how important their time together – and racing against each toehr – on the MedCup had been.

For the first time Team New Zealand will have a TP52 in their own colours next season. A Botin Carkeek design is already under way at Cookson’s in Auckland– who built the 2007 Circuit winning Artemis (SWE). The plan is to have the boat in the water around the time of the Louis Vuitton Pacific Series (31 January to 14th February) before shipping it to Europe.

“We tried to get a team together for this season but did not quite get the funding in place, but Dalts (Grant Dalton) has done a really good job and decided as a priority to focus on the TP52 season next year we have actually started building the boat at Cookson’s with a Marcelino Botin design. The boat should be ready for when the Louis Vuitton series in on in Auckland, with sea trials February-March next year and then ship the boat up.” Reveals Ray Davies (NZL), who won the MedCup Circuit in 2006 with Mean Machine.

“Basically the core of Team New Zealand, Dean will be driving, I will be doing tactics, Kevin Hall and Adam Beashel are involved in the afterguard, Jeremy Lomas, James Dagg, a lot of the guys who have been involved with the TP52’s for the last couple of years.” Continues Davies.

“We are very excited to be getting it all together on the one boat. We have backing. It has been our philosophy for the last few years to use the TP52 Circuit as the most competitive big boat sailing around at the moment, even though the numbers have dropped a little bit, the level is getting higher and even if there were ten boats out there it would still be the best racing out there. It is just fantastic racing, we say it time and time again. You have to fight for every point no matter where you are in the fleet, and if you can prove yourself in this fleet, you are definitely proving yourself against the best of the best.”

He considers the lessons from Quantum’s win this season:
“ The Quantum boat has done some really nice work this year and Marcelino has improved his design and the rule has not changed at all, no radical modifications. There is always little things you can improve on. It will be a pretty similar looking boat, I’d say, the change rule has changed a little with the coach roof layout, but the speed comes from under the water as we know, and there it hasn’t really changed so it’ll be a similar style of boat.”

“ The sail package is from North New Zealand, where it is good for our America’s Cup design team to get involved, and work on the communication loop. Burns (Fallow) will be designing the sails, and Southern Spars will do the mast.”

He believes that the 2009 Audi MedCup Circuit will be ideal for the New Zealand public to get behind their team on:
“ The New Zealand public still don’t know much about this Circuit so it should create a bit of interest and this should put it on the map there, a bit. But the whole emphasis really is to have the sailing team together, under pressure, working on relationships under pressure.”

“ The last two years with Mean Machine have been good,” explains Davies, “And one of the key lessons you take from it is that you always have to be striving to get better and improve and you can never rest on your laurels and you always have to be looking where your next gain is. Quantum have done a good job there. They started incredibly well, and I think that is where they got their biggest advantage from, starting nicely off the line and once you get off the line in good shape, that is 90% of the race right there. And their speed has been really good upwind and they have improved on their downwind performance and they are just a solid team. They recovered well. The standout from Quantum has been their starting ability on the line going fast. Part of that has been the sailors on board have been doing an excellent job, but also their appendage package is relatively forgiving.”

“ One of the main guys coordinating the package is Richard Meacham who is coordinating our ideas and putting it all together, a bit of a link between the sailing team and the designers, and he has sailed on all of the top boats in the last two years, and has a good feeling about the TP52. Kevin Shoebridge is involved in project managing, planning and the logistics, Richard Meacham, Jeremy Lomas and Dean (Barker) have all been pretty tightly in planning across the whole season.”

“The idea is to do all the sea trials in New Zealand. It is always hard to get the boat up to speed and iron out all the bugs, so we will try and have a really good session in Auckland so that when we do get to Europe we are ready, We have seen that again this year where a few of the teams a couple of regattas to really get their boat sorted, we don’t want to be still improving, we want to really hit the ground running in the first race. Quantum did a good job with that, Mean Machine did a good job with that and we saw Platoon and the Spanish hit their straps lately.” 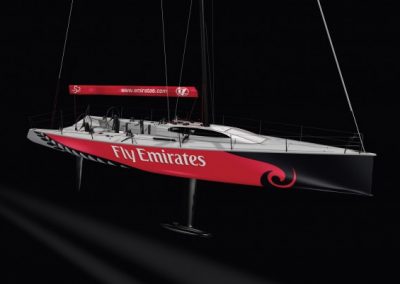 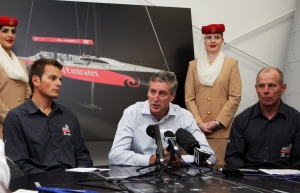 Back
← Quantum completes the Double! Lanzarote, here we come! →